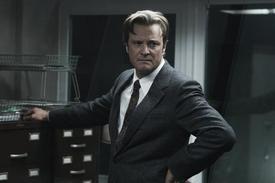 Few authors can write Cold War spy books with more authority than John Le Carré. How does he know so much about spies? He was one. The British author penned scores of novels culled from his experiences in England's intelligence community, and the latest adaptation of his book Tinker, Tailor, Solider, Spy brings the old-fashioned world of analog espionage to the digital age. So how did screenwriter Peter Straughan turned Le Carré's classic into a white-knuckled, taut thriller? We ask.

What kind of research did you do before writing this film?

Well, I'm ashamed to say that we didn't do any. I bought one book, called The Cold War Year by Year, it was practically a picture book, like The Cold War for Idiots, and I looked at it once. We talked to le Carré a lot. He was in MI5 and MI6, during the Cold War, Stationed in Germany, so he was right in the heart of it. He was intimately involved in real betrayals. So he was our resource.

Describe those first meetings with him.

He's kind of exactly what you think he'd be like. We met him in his house in London, and he came downstairs. He's razor-sharp with those kind of eyes that will drill right through you. Piercing intelligence. He has been through the adaptation process before, too. He seemed fierce when we first met him, but when we went to a restaurant with him in the afternoon, we ate and drank wine and he really mellowed. And he started telling us stories about Richard Burton and Liz Taylor in the Spy Who Came in from the Cold. He's a great storyteller.

He was the last of that generation of great British novelists. He knows this whole generation of actors and writers. He was friends with Graham Greene and W.H. Auden. In fact, the part in the film where Kathy Burke's character says, "I don't know about you, but I'm seriously under-fucked" We got that from le Carré, and it was something W.H. Auden said to him at a party once.

Was he open to you interpreting his book?

Very open. We were quite nervous to meet him. We didn't know what he was going to be like, and, I think, this is the book closest to his heart, so we thought he would be very defensive and cautious about it. But he was totally the opposite. We were reluctant to move away from the book, but he was not precious in any way. He was like, "No, let's try something new!" So it was very liberating to play around with this. We weren't afraid of offending him.

You had two different versions of the story: the miniseries starring Alec Guinness, and the book. Which one did you work off of?

We just worked from the book. The miniseries just works like the book. It's so faithful, that's also why it is seven hours long. It was page for page, so there was really no point to mimic the series. We watched it once the night before we started, just to get out from underneath its shadow—to exorcise it. We didn't have seven hours—we just had two. We had very different ideas about what we would want to do, but it felt like we were part of the family. We were one of the sons of the book, which would have a family resemblance but its own look as well.

The books are so much about Britishness: the fall of the Empire and how British people had to redefine their identity. Were you trying to bring these heavy Anglo-centric values to the new film?

It is woven into the fabric of the book, there is no way around it. All those smug characters, that whole generation born to empire. In the book, it says that they were born to rule an empire, but were without an empire. It's all going and gone. It was part of it, but it's really mirrored in the individual's stories, we didn't worry about it. It all comes back to the human stories.

The Cold War was right on Britain's doorstep, so what were your own memories of the Cold War?

We were safe. Really we were all safe. In fact, the way it came into my life was through movies, really. I remember When the Wind Blows, a cartoon about an elderly couple after nuclear war. I remember that really vividly.

It's interesting how we experience the world through fiction first.

It's strange how that fiction ends up back in the world. Le Carré made up a lot of the jargon. Like "moles" and "the Circus." And I've heard that some of it has actually filtered back into the department.

Life imitating fiction. The American military is driven by fiction. They name missions after movies, and many recruits say that they got into the military after watching Full Metal Jacket.

Well, I'll let you know a secret about the British secret service's involvement in the film, but we have to go off the record.

Ok, wow, that's a great story. That can't be real. I have to put that in here. You've got to let me.

No, I don't think we can tell anyone about that.