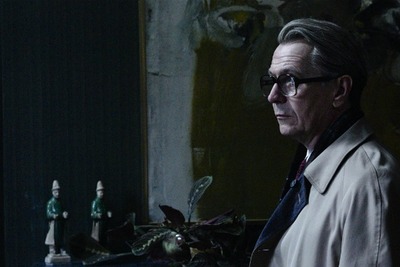 Tinker, Tailor, Soldier, Spy is a magnificent film. From the subtle, cynical take on geopolitics, the accurate period recreation, the action-free, character and dialogue based story and of course the exceptional performances from an absurdly excellent cast, in nearly every way that matters it's a masterpiece. Special praise has to be reserved for the deliberate, elaborately constructed story that constantly subverts your expectations for a spy thriller. But watching the thing, what I find most compelling is the decision to make it a period piece, set during some of the darker years of the Cold War, rather than giving it a modern update.

The novel by John le Carré upon which it is based is set, roughly, contemporarily to the period in which it was released (though it's based on events that happened in the early 60s), but it isn't difficult to imagine a modernized update, set in the murky world of the War on Terror. I suspect all that would accomplish, however, is yet another cynical take on our times that thrills, but fails to challenge our preconceptions about ourselves. By expressly setting the adaptation of Tinker, Tailor, Soldier, Spy during the era in which it was written, director Tomas Alfredson has pulled off a feat similar to Mary Harron's excellent film version of American Psycho, turning the story into a commentary on the period in which it was written. Strangely, this is something rarely done to the Cold War, at least on movie screens.

That lack of examination is fascinating. Despite the fact that the Cold War lasted 40 years longer than WWII, (most of which time we spent being completely terrified that the world was going to come to a fiery end because of a disagreement over how people ought to be paid for the work they do,) we responded to its end by... acting like it never happened. In the 20 years since, we have endessly - well, not endlessly, but a lot - devoted ourselves to examining World War II instead. Certainly, legacy pop cultural artifacts from the Cold War, like James Bond, persist. But they have been removed of any original context, either updated to Realpolitik analogues for contemporary events (think the recent adaptations of Robert Ludlow's Bourne series, which jettison everything but the name and the amnesia.) or turned into apolitical popcorn fare. Barely any attention has been given to the period as it actually was, except as it pertains to the unique experiences of the Baby Boom. That means a lot of time spent on how scared people were during the Cuban Missile Crisis, or on how the Vietnam conflict divided the country, or how those kids today (back in the 60s) were totally freaking old timers out, and so forth. But nothing on, say, the fact that our own policies helped make Castro inevitable*.

That's because the Cold War was just messy. While we like to think of ourselves in the West as being the good guys, a defining characteristic of the era is that actions taken by our governments frequently betrayed our own ideals. We overthrew democracies in Guatemala and Iran; we fought a bloody, decade-long war in Vietnam in order to keep them from having the government of their choice; we supported a dictator, gangsters and corrupt businessmen in Cuba which led directly to Castro's success; we helped the Chilean military overthrow the elected government; elements in our government disobeyed the law to illegally funnel money earned through complex and illegal weapons sales to terrorists in Central America. And that's just off the top of my head. We might have been right to oppose a system that caused untold misery to countless of its citizens, but in our quest to do so, we inflicted considerable misery of our own on people only tangentially involved in the disagreement.

No wonder then that we prefer to look closely at moments like World War II instead, events that let us puff our chests up and proclaim that we are, in fact, the good guys through and through. It's why, despite the fact that the Cold War's dirtiness and lack of moral clarity is mirrored in the ongoing war on terror, our political and economic elites are doing everything possible to portray that conflict as a noble cause on par with the Big One. Saving Private Ryan is a lot more inspiring than the Bay of Pigs invasion, after all. And part of what makes Tinker, Tailor, Solider, Spy such a great film is that it is an explicit commentary on all this.

Gary Oldman's George Smiley has been tasked with investigating the possibility of a mole at the highest levels of British intelligence. During the course of his investigation, the audience is treated to a depiction of mid-period cold war realities that, despite being entirely fictional, has the flavor of real life. One moment that perfectly captures the essence of the time occurs when Smiley is questioning a retired intelligence analyst who served in Circus (the fictionalized version of MI6) with him going back to World War II. Regarding that war, the analyst expressly says they were good days. "It was the war," Smiley responds sadly, clearly unsettled by the idealization of some of Britain's darkest moments. The analyst retorts that at least World War II was one Englishmen could be proud of, (as opposed to the dirty business they've all been up to since). This point is punctuated by the analyst's plea, as Smiley leaves, that he not return to her house if it turns out that one of their former colleagues is proved to be a traitor. "I'd rather remember everyone as we were", she says. That speaks volumes about the era and why it remains something of a black hole, at least pop culturally, since it ended.

When watching Tinker, Tailor, I kept thinking about Robert Dinero's excellent 2006 directoral effort, The Good Shepherd, a fictionalized account of the founding of the CIA based on the life of James Jesus Angleton. Both it and Tinker, Tailor cover similar territory from opposite ends, Shepherd from the beginnings of the cold war through the botched Bay of Pigs invasion, Tinker, Tailor the decade after when the west, particularly after the disaster in Vietnam and the shock of the global youth movement, was utterly demoralized. Both films have a similarly strong streak of vast resignation and disillusionment (which is why they would make an excellent double feature). In Tinker, Tailor, that disillusionment is exemplified by George Smiley's recounting the time he met 'Karla', the fictional head of Soviet Intelligence, in a cynical attempt to lure him to the west. He remarks that he can beat Karla because he's (Karla) a fanatic; like all fanatics, Smiley says, karla is concealing secret doubts about the system he devoted his life to serving. That statement doubles as an admission that Smiley himself doesn't really believe in what he's doing (beyond wanting his own team to win), and it colors the rest of the film.

The unkindest cut comes near the end, when the traitor, having been apprehended after falling for a beautiful bit of misdirection, says of his treason, "it was as much an aesthetic choice as a moral one. The west has become so ugly". That pithy summation of his motivations could just as easily refer to the awful aesthetics and economic decline of the 1970s, but it feels aimed as much at contemporary audiences as it does to the culture of 1974.

And perhaps it should be. We continue maddeningly stupid policies like the Cuban embargo despite the fact that the country poses no threat to us and has no allies that could possibly hurt us. We have turned our version of capitalism into a national religion, and the result is an economic system so damaged and corrupt that 3 years into one of the worst recessions in global history, the only thing that has happened is that the people who caused it continue to go unpunished. Anyone who believes in individual liberty and the right of all peoples to travel, think, love and do as they wish could never hope for a Soviet Victory during the Cold War, but blatant moral hypocrisy, social decay, and systemic corruption are precisely the criticisms lobbed against us during our disagreement with the communist world. It's almost as though, having beaten them, we set out to rub it in their faces by living up to every dirty thing they accused us of and more. A close examination of the Cold War forces us to admit this.

Tinker, Tailor is unlikely to match the success of more apolitical thrillers, but I sincerely hope it is successful enough to warrant a sequel, and a host of imitators. We need it, whether we want it or not.

*it's worth noting that John le Carre`'s speciality was the critical examination of Western Cold War policies and associated values-betrayals. I'm commenting on the film, not his books.