on December 16, 2011 by Hillary Eschenburg
Print 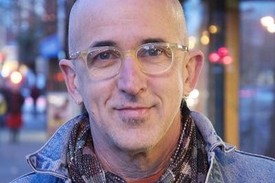 Boxoffice recently caught up with We Were Here director David Weissman, whose new documentary tells the emotionally wrenching story of how San Francisco's gay community rallied together during the onset of AIDS. A stirring and unforgettable film, We Were Here made the list of 15 films that are eligible for a Best Documentary Oscar nomination.

We see these different individuals sharing their stories about everything they went through. How were people in the community able to remain so resilient through everything?

You don't have a choice when you're in a situation like that. And, I think there was a huge variation of responses. Some people really disengaged. There were people who moved in the early 80s because they couldn't handle it. So, I think there was a wide range of responses. When your friends get sick—or you get sick, or there's a huge crisis—people do find internal resources that they don't always know that they have. And I think one of the special things about San Francisco was that it was all so visible and there was such a community of support, so that people were able to get support from each other as well.

So there were already a lot of resources for people to draw from?

Well, in the early years I think most of the resources were just people's friendships and networks of political activism and networks of communities and friends. It was very challenging. Also, one of the things I've realized in the making of the film that I still can't quite make sense of is how in the midst of it all, normal life was still going on. It's not like everything just stopped and everything was AIDS 24 hours a day, there was a juxtaposition of normalcy and insanity that were really very much functioning in tandem.

I was thinking about that as I was watching the film—it seemed like it completely consumed everybody's lives and yet there's still the reality that other stuff does happen and life does still go on in spite of this crisis.

It does. If I look at my own photographs from that period or even the photographs of the people who are in the film, people are smiling and having birthdays and going out and hanging out in cafes. Even if you look at the videos of the gay parades in those years they're very festive. There certainly was this dark cloud hanging over everything but, it's an interesting juxtaposition that I think is not unique to the situation.

I think it also demonstrates the human spirit, and not really having a choice but to just continue on with life.

Yeah. I think Daniel says in the film, at the end, he says how it's not heroic, you just do it, and you don't have a choice. And yet, I think that's not entirely true. People did make choices, and people's choices also shifted over the course of time. Some people were slow to engage and got more involved, and some engaged very early and then withdrew early because it was just too much.

How has the AIDS crisis shaped the present day gay community?

It's the biggest piece of gay history since the beginning of the gay liberation, which was considered to be the Stonewall Riots in New York City in 1969. It's shaped everything. Obviously, for gay men, we're still living with the specter of this terrible sexually transmitted illness that still dominates our sexual lives whether we are careful or not—it's still there. The politics of our community were drastically changed by the epidemic. I think it brought community together in some very important ways in spite of the awfulness of it I think it did give us a tremendous amount of visibility, and respectability and strength, political strength, to move forward in other areas as well. And our community was matured and deepened by all of the terrible suffering and loss that it had to go through.

I think it had a huge impact. I think in a way it's too big of a generalization to talk about how separate they were and how dramatically they changed because there's so much variation within that history. So many women were very much focused on the women's movement in the 70s. It had more of a pull and a lot of gay men were not so conscience around sexism. But politics also in general evolve over time and I think the epidemic certainly was a time when some of those gaps between lesbians and gay men were bridged in ways that have remained to this day.

Did it create more of a dialogue or something along those lines?

Yeah, I think the priorities shift. First of all the women's movement, it also shifted in how it was functioning in the world. And I think that there was so much need for unity within our community around fighting- first of all, fighting against the repression that was coming against AIDS, and the bigotry, but also fighting for the medical care, fighting for all kinds of political validations. So, I think it did permanently alter the relations between lesbians and gay men, certainly in San Francisco.

It seems like the community was already pretty tightly knit together, and people responded very quickly to the crisis, do you think if they hadn't already had so much social support that it would have turned out differently?

I think it's different in different cities and in different countries. San Francisco was the most politically visible and politically powerful gay community anywhere at the point in time, so, I think that it enabled us to move forward in certain ways faster because we had fewer local obstacles in the fight against AIDS. I think in other cities there were more hostile infrastructures to deal with.

It seems to me that San Francisco is a great example of how people can pull together in a really positive way, and how important community is. Do you think that's unique to San Francisco?

I think the situation here was different because of the pre-existing political strength and the political perspective of the local community. I think that the kinds of pulling together that happened can happen in a circle of friends, and can happen between two friends, and can happen in a family. I think it does manifest in all different kinds of ways. But the politics of the gay community in San Francisco allowed us as a community to move forward in certain ways that were unique, and yet reflected on larger themes of family and community and friendship that certainly are not unique to San Francisco.

Thinking about how the AIDS crisis has become very severe in other parts of the world, what do you think other communities can learn from the way the San Francisco community addressed the crisis?

You know, I'm not an expert on that. I think, in a more general way the film on some level is just to encourage people that they can find inner resources to face a crisis that they can't anticipate. But in terms of the specifics, every country has its own reality and its own problems, and there are so many different issues, and it's not really my expertise.

It's just interesting because I think it's a great model of what can be done or how people can pull together.

Well it's very different in places where AIDS isn't within a defined community. I think that to some degree we've benefitted as well as suffered from having it concentrated in this very politically active community that had to stand up for each other because everybody else hated us. And I think if you go to South Africa or Thailand or, you know, Uganda, or other places in the world, it's not necessarily concentrated in a community that has anything in common as a community, so I think that makes it more difficult to organize and to find support.

Among all the people that you interviewed, every story is different and incredible and heartbreaking, are there certain stories that jump out to you more than others or ones that you resonate with more closely?

There are moments in the film that are really powerful for me. I don't think there's particular stories. The movie is parallel to my own experience in San Francisco. I think there's a point, just before the epidemic, where Paul Boneberg is talking about a big gathering of people on Castro Street for Harvey Milk's birthday and he said "We had no way of knowing that AIDS was already among us." And you're looking at all of these faces, and I mean, I knew a lot of those faces and you just get that feeling that this thing is already starting to happen before anyone had any idea. The virus was already spreading in the community before anyone even knew that it existed. That always is a really heartbreaking part of the film for me.

Yeah. It's incredible to watch it and to realize the magnitude of what happened there. And it's hard as an outsider even to understand what it was like to be there, but, I think you do a really job of pulling the stories out and putting it all together in a really powerful way.

Where were you when you found out that made the list of the Academy's list of 15 potential best documentary nominees?