close
INTERVIEW: It mostly reflects positively on us that he was so quickly turned into a joke.

Rick Santorum's "Google problem" is well known. Thanks to some rather odious statements about gay people, his last name will forever be associated with the by-product of anal sex. Even today, googling 'Santorum' gets you two results about that by-product ahead of his Wikipedia page and website. A smart politician worried about the fact that his name makes him a laughingstock would hire an astroturf outfit to create a ton of fake blogs in order to drive up the number of google search hits for non-sexual Santorum references in order to change the search results. Instead, he whined like a baby, accused Google of deliberately letting it happen and demanded they circumvent their own policies to save him from himself.

At long last, Rick has company in the person of Rick Perry. Perry's presidential campaign is over; all that's left is for his team to accept defeat and slink back into the Texas countryside from whence they came. Fortunately, Perry thus far refuses to do this and as a result has made himself the laughingstock of the Internet with a hateful Youtube video called "Strong", uploaded last week. I'm guessing you've seen it:

I come here not to point out the enduring lie fundamentalists like to tell about so-called persecution of Christianity in the United States, or the fact that he is making his pitch an explicit promise to enact actual, non-exaggerated persecution against gay people. No doubt you already know why these things are terrible and why Perry is a terrible person for them. The fact that, rather than having the desired effect of revitalizing his campaign, it's turned Perry into a national joke, is the important thing. Nothing exemplifies that like the image that blasted the Internet last week pointing out the amusing similarity between Rick Perry's super authentic totally not a put-on cowboy jacket, and the one worn by Heath Ledger in Brokeback Mountain. 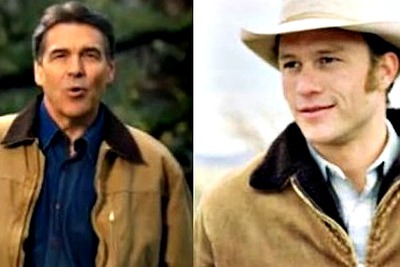 The similarity is more than coincidental. Perry is wearing almost the exact jacket. Worse (for him), the music in his ridiculous ode to hate is eerily similar to the leitmotif from Brokeback Mountain. I'm honestly not sure what to make of this. Naturally, one wouldn't expect bigots to flock to theaters in order to see a film that accurately depicts the tragic effects of homophobia on its victims, and suggests, quite rightly, that Jack Twist and Ennis Del Mar would have been far happier had they been able to openly love one another. But surely, surely there were more than a few who at least heard of it, saw advertising related to it, maybe noticed that it was a cultural phenomenon? It grossed $178 million and remains to this day the 5th highest grossing western and the 8th highest grossing romantic film since 1980.

The unanswered question is, was there no one on Perry's staff who has actually seen one of the most successful and acclaimed films of the last decade? As it turns out, probably: Tony Fabrizio, the Perry campaign's lead pollster, is himself gay. I find it impossible to believe, especially considering how his own life must surely relate to the lives of Brokeback's protagonists, that he didn't see it. Which means he either missed the obvious similarity, or he caught it and said nothing, assuming, quite rightly, that the intended audience would miss it entirely.

A while back, when Herman Cain's campaign manager released that amazing ode to the cigarette smoking rebel, I called it "out of touch hipsterism". But at least that pathetic attempt at coolness was trying. This kind of obstinate refusal to show even cursory awareness of our actual culture, as opposed to the bizarro alternate universe the Christian right has created for itself, is fascinating. It's a phenomenon we previously saw in the conservative reaction to The Muppets. Such deliberate squareness makes them a joke, of course, but it reaffirms the pretensions of people who have no interest in the society in which they live. That they are also the only side making a populist appeal to voters is disturbing. Luckily, whether inadvertently like Perry, or deliberately, like Herman Cain, attempts by confirmed squares to stake out a position as a rebel or a cool person invariable fail, but the sad thing is that despite this, their side is presented as the only authentic position in our culture.

Writer Amanda Marcotte has frequently pointed out the connection between this phenomenon and the fine art of Hipster hating, and it's worth aping her here. The thing is, hipness, or whatever you want to call it, is more than just knowing that Foster The People is the Peter Bjorn & John of 2011, or why Fast Five is incredible but The hangover II is crap. Far from being the snobby, self-obsessed dilettantes detractors glee in making fun of, hipstery things like knowing about the latest memes, or constantly absorbing new music and film, is a sign that whatever the person's disposition, they're actively engaged with the culture at large. You have to really care, after all, in order to form opinions strong enough to get you labeled a snob.

The absolute refusal of arch conservatives to even make a cursory attempt at knowing about our culture demonstrates what is probably the single best explanation of the vast divide between the political factions. Would that the other side recognize this, and openly attempt to engage the rest of us who do make the effort, the country might be in a better place. Barack Obama is fond of saying that certain things are not "red state or blue state values, they're American values". Nowhere is that more true than in how we look at pop culture. Perhaps it's high time we stopped arguing politics with our reactionary family members, and just took them to the movies instead.