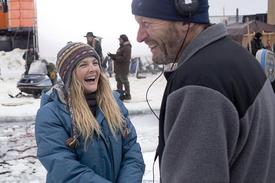 Who doesn't love whales? These gargantuan organic submarines of the sea aren't the stars of Big Miracle, but they are the source of an international incident that brings the world together in this based-on-a-true-story film. Three whales are stuck under the ice near the remote town of Barrow, Alaska—and when one ambitious young reporter (John Krasinki) broadcasts the story, scores of reporters, activists and Inupiat tribesmen team up to help set the whales free. Greenpeace activist Cindy Lowry (Drew Barrymore) faces down an oil exec (Ted Danson), while the White House, after 40 years of tension, calls up the Soviet Union to ask if they'll help. Director Ken Kwapis, best known for his girl power flicks like Sisterhood of the Traveling Pants and He's Just Not That Into You, talks about swapping out cute comedies for the challenge of creating giant robot whales.

How did you get this ensemble cast together?

I first got Drew Barrymore. I worked with her on He's Just Not That Into You. We became very close, and when she heard I was doing this one, she basically beat down the door and said, "I am Rachel Kramer." I said, "I know you are!" Drew is so accessible, so open. You see her on the screen, and she looks like someone who you could have a beer with. She really likes to immerse herself in the world of the characters. For instance, she only used an IBM electric typewriter instead of using email. She was my dream girl for this role. I knew John Krasinski from The Office, I directed the pilot and helped launch the series and I directed him in his first starring role in License to Wed. I think of John with classic leading man qualities-he reminds me of actors from another era, like Gary Cooper. He has a way to be funny but grounded. Everyone was really happy to come up north and work in the cold.

It was interesting that you cast Ted Danson, who is a huge environmental activist, and as the money-grubbing oil guy.

What was it about this true story that made you want to spend a lot of time making a movie out of it?

After He's Just Not that Into You, I was determined to find a story that wasn't just a romantic story. When I read this script, I was struck by the extraordinary nature of the rescue itself, but there were a lot of characters who got involved in the rescue who had very different, often competing agendas. I liked that these people put aside their agendas to solve a problem. In this case it was a pretty daunting problem: how to move three huge marine mammals five miles. I liked this idea of strange bedfellows, an unlikely group of collaborators.

Tell me about the miseries of shooting in the cold.

The biggest problem was that this film was supposed to take place on actual Arctic sea ice. The ice could shift, causing certain danger. On top of that, we couldn't find a way to work on the ice with a 100 person crew, especially with the polar bear danger, too. So we had to build an enormous football field-sized ice set in Anchorage. It needed to contain an underground water tank, one that would house large robotic whales.

You wake up in the morning and every news station has a different weather report. The weather was totally unpredictable. You go from hard sun to overcast in a moment. It was very cold. Thirdly you have a large ensemble cast, many of whom had not been in front of a camera before, and lastly some large animatronic whales. Often, they broke. We couldn't just hoist them out of the water to fix them—they were huge. We had to send divers down to fix them.

It's interesting to go back in time to the political landscape of the '80s.

There were so many different avenues into this story. There's the rescue itself, there's what life is like at the northern tip of Alaska, there was what Greenpeace was like in the '80s, then there's the whole geopolitical aspect of this happening at the tail end of the Cold War. It was right around the 1988 presidential campaign between George H.W. Bush and Michael Dukakis. They were neck and neck at that point. It was interesting to see how the different parties could co-opt the rescue, like the Reagan administration could somehow burnish his frankly rather shoddy environmental reputation. George Bush was on the campaign trail promising to be the environmental president. A lot of people know about the infamous television advertisements that his campaign created by Lee Atwater, these ads showing Dukakis riding round in a tank [looking like a tiny dork]. Bush even attacked Dukakis for how polluted Boston Harbor was. Bush promised to be a great steward of the environment, so the whale rescue was really appealing to him. There's also the idea that at this moment in time, we were still technically enemies with the Soviet Union, so then this idea of enlisting the Soviets to solve a problem. There was a lot of discussion of whether we wanted the Russians come in to solve an American problem.

If this event happened today, how do you think it would be handled?

I think there would be just as much squabbling amongst the partisans. The issue of conservation versus traditional subsistence hunting is just as valid today. There is commercial whaling happening today, even though it is illegal. In the film, there is a moment between Vinessa Shaw's character and Drew Barrymore's character about conservation versus job creation.

Yes, you'll hear it on the campaign trail this year, too. Some politicians believe that the EPA is a "job killing" organization. The idea that trying to conserve the environment or creating sustainable energy will kill jobs. I went back and looked at every Time Magazine, to see who was their Person of the Year in 1988. It wasn't a man or a woman. It said "Planet of the Year" and there was a very beleaguered looking image of the Earth. It was the only time that Time didn't cite an individual or a group of individuals for the cover—it showed that the planet was in danger. This event was very newsworthy. There were over 150 journalists from around the world in the town of Barrow covering it. It was featured on every prime time newscast for two weeks. I went back and watched all these newscasts and at the tail end of them would be this filler piece about this new phenomenon called "Global Warming." That phrase was introduced to Americans in 1988. This isn't a film with an overt message, but it does raise questions about our ability to be good stewards of the Earth.

We take recycling and environmentalism for granted today. But looking back at it, these were some of the "radical" things that Greenpeace and other so-called fringe groups advocated. Now, it's normal.

In the case of Rachel Kramer, she was a one-person Greenpeace outfit in Barrow, Alaska. There wasn't a highly developed organization there. The real life person that Drew's character was based on, Cindy Lowry, was known for her shock tactics. I heard a story about her bursting into an oil company board room carrying an oil-soaked dead otter and lobbing it on a boardroom table to make a point about the dangers of shipping oil through these environmentally sensitive waters. Young people could do worse then to have a role model like Cindy Lowry.

The film seems to address a lot of issues from indigenous rights to environmental protection to political quagmires. Yet, it seems that the film doesn't step on anyone's toes. How were you able to tread lightly?

I respect the point of view of Drew's character. I also respect the views of the Inupiat whaler—and there is, of course, the classic paradox, that the person with the most profound spiritual connection to animal might be the one who hunts them. This is something that Drew learns in the film. Her point is well taken. The people of the area receive money from the oil companies who lease the land for drilling. Why do they need to keep killing these creatures, these creatures that are arguably as emotionally complex and sophisticated as we are?