Chaplin Cred: How 'The Artist' Won the Approval of Silent Film's Grandest Family 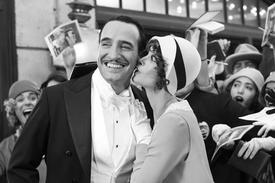 Charlie Chaplin's gorgeous granddaughters, Dolores and Carmen Chaplin, are New York actresses who were born in London and raised in the south of France. Like their grandfather—a British expat who made his fame in America before returning to Europe—they're Hollywood royalty with an international bent. But while Dolores and Carmen are on the upswing in their fairly new careers, they're also young women forever attached to a legacy they can't help but continue—acting is their family business. And with the French-American silent film The Artist muscling into the Oscar race, they're lending their support to a period piece charmer that resurrects their grandfather's world.

Did The Artist ring true to you?

Dolores: This was my second time and I enjoyed it even more this time—I liked it the first time, but I got all the details I missed in the first round. It's a lovely movie. It's a very sweet love story. The acting is brilliant. Jean Dujardin is so charismatic and Bérénice Bejo, too. I think Michel Hazanavicius did a great job. It must be a challenge to make a black and white silent in 2011. It's very courageous. And as an audience member, you leave the film feeling more intelligent, which is always a good sign. It's nice to leave feeling like you had a new experience.

You have two points of access to this story: One, that it's a French film, and two, that you're related to a legacy of silent film.

Dolores: It's funny because last night someone in the crowd said to the director "I'm very proud to be French watching that film." And the director said, "I don't care much about being French..."

Carmen: It's just a detail.

Dolores: We're British by passport and in France they called us British and in England they called us French. I don't think The Artist has a French sensibility. You could be in any country and appreciate the film in the same way.

As actors, do you identify particularly distinct methods in the acting?

Dolores: I think they [Dujardin and Bejo] are both good actors in talking films as well, but it's a different way of exercising your acting skill.

Carmen: Without dialogue! I write and love writing dialogue but I think it would be so liberating to be able to act and not be locked into words.

That's such a neat way to think of it: Locked into words. How do you think the experiences are distinct for the audience?

Carmen: I think when you're watching a silent film in the cinema, I do think you're more with the audience than when it's a film with dialogue. The reactions to what's happening onscreen, whether it's funny or emotional, feels like it hits the audience more viscerally and people tend to have a more spontaneous similar reaction. The producer was saying in France, they laughed at different moments than they did here and you tend to laugh along with your audience members.

Dolores: The experience is different if you're in a group.

Carmen: Also, it's interesting that it's the oldest way of filmmaking and it feels like something fresh and new.

Was acting a natural part of family life?

Carmen: Yes. When we were kids we organized musical shows. When we were small. We did plays. For some reason when we were 8 or 9 we redid Fawlty Towers in school. I was Basil and Dolores was...what was the woman's name?

Carmen: Wait. Or was I Manuel?

Dolores: No, I was the man! I was John Cleese.

Carmen: No, you were Manuel!

Delores: Manuel was the funniest.

Carmen: I think we did this for a while and we did different episodes. It was a French school so we translated it. And then I got a camera. We were always forcing our parents to watch us perform.

Of course you watched your grandfather's films?

Dolores: I remember watching home movies that my grandfather made that we'd watch when we'd go to my grandparents house in Switzerland and my grandmother would show me pictures of Charlie as a kid.

Carmen: Some Chaplin movies—I think I remember The Kid—and a lot of Judy Garland movies.

Garland was famous for making the audience empathize with her, as was Chaplin. That must have an effect on your work today.

Carmen: You hope it has an effect, but I don't know. You hope all those things make you a better artist but it's hard to judge it from your own point of view.

What was the last project you worked on?

Carmen: I worked with Olivier Assayas this summer and worked on my sister's short movie.

Dolores: I was finishing and editing and doing the music. I just finished post-production. I also worked in Astérix, it's a big comic book movie series in France.

Dolores: Tryst in Panam. Panam is an old slang word for Paris.

Is it a period piece?

Carmen: No, but we shot in a very old hotel—the hotel Oscar Wilde stayed when he was exiled to France. It's a beautiful boutique hotel. I wanted the film to have a timelessness, but it's not a period film.