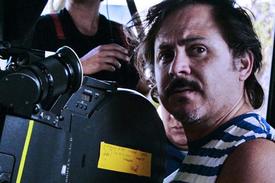 In the five years since the government waged war upon the drug cartels, Mexico has suffered almost 50,000 casualties in a conflict that seems to have no resolution. In Miss Bala, Mexico's Oscar submission, the abstract complexities of cartel violence is brought to the human level. Laura Guerrero (Stephanie Sigman) just wants to represent Baja California in a beauty pageant, but when she gets swept up into the drug war by cartel leader Lino Valdez (Noe Hernandez), she learns that the Mexico she thought she knew is twisted into a knot of corruption, lies and violence. Boxoffice met up with Miss Bala director Gerardo Naranjo and his producer Diego Luna, the founder of Canana Studios and an actor himself (catch him in Contraband), to talk about filming—and living—in Mexico amidst unprecedented violence of the drug war. Are they worried about coming under fire from the government or the cartels?

You shot in the Baja town of Aguas Calientes, which has a history of violence and poverty. There, armed men have openly attacked police headquarters. What affect did your production have on those communities? Did they disrupt or help your filming process?

Gerardo Naranjo: Mostly, we wouldn't include the people there. We would just show up and start filming and hope that the people [in the background] wouldn't look at the camera. I try to direct the main actors, and let the others do whatever. It's more interesting to put them into a situation and see what happens, because the people around them will act in a particular way to the camera. It was very interesting.

Were those scenes improvised or scripted?

Naranjo: It was very scripted, but the people around them were not. For instance, when we were crossing the border from the U.S. to Mexico, we just had a camera, we were in the back of the truck and Stephanie did know how to drive. So we had all of these possibilities. We could crash, police could have stopped us. But that didn't happen. Police didn't stop us, we didn't crash, and we just crossed the border. There were a lot of planned accidents really.

Diego Luna: There was enough improvising in the shoots, as it was. We had to work with what we had and what was happening that day. We couldn't wait if it rained. In Mexico, that happens a lot. You do scouting, and you think a street is perfect, but when you come back, and the whole thing is different. Maybe a house wasn't there anymore.

Naranjo: We were committed to reality with this movie.

Any pushback from the government?

Naranjo: Not in any way. We didn't ask for permission, not that we needed that. In Mexico, the film industry is not that powerful, there's no control over shoots that much. If you can park your cars, that's all the permission you needed.

That's a huge difference between Mexico and America. Here we talk about living in ultimate freedom, but in reality, we have a lot of restrictions. You need to get permits and fill out complicated forms to shoot. But in Mexico, it seems like it's much more free for filmmakers.

Luna: There is a big risk that you won't get what you want in Mexico. But on the other hand, almost every film we shoot is subsidized by the government. The money doesn't come from a rich person or a business. The money comes from funds, from tax breaks. I always say that this is a country offers you a lot of freedom, but to only a few people. There's a huge part of the population who don't have a choice of where they live, or where they go to school, or whatever. They are just trying to survive. Yet, for a little group of us, we are allowed to do what we want. I'm 32 years old, I have a production company, we have more than 10 films, it's something that you wouldn't imagine that would be possible in another place.

Naranjo: And you didn't inherit any money or anything, either. The rich guys are born rich, and the poor are poor. So it's strange to have someone like Diego who didn't have a lot of wealth to start.

Luna: But in film, it's quite unique what happens. There's a group of guys who will make a film that will just travel to one festival, maybe 100,000 people would watch it. Then boom—film became not just for the Mexican society, but through our cinema people have learned about our country and are talking about it. It's weird because there is a debate: "Well, if we, the government, are paying for these films, shouldn't they be saying good things about the country and the people and the reality here?" But we are in the middle of a change. I can feel it, but I don't know what's going to happen.

The Mexican government will fund a film that says negative things about the country?

GN: It's very paradoxical. People always ask if we got censored, but we didn't. We are critical of our country, but we are funded by some organism inside of the government. Everything doesn't follow a clear line.

The movie shows the paradoxes of Mexico and the blurring of lines between classes. These characters oscillate between socioeconomic classes, coasting from lower class families to the working class cartel members of the drug war, to the upper class beauty pageant. It juxtaposes these different parts of the social hierarchy.

Naranjo: That was our biggest wish, to make a movie that starts at the lower dimension, that shows how women are objects, then broach the subjects about justice and violence. On a basic level, we wanted to make a suspense film that had these dimensions. We didn't want to make big speeches, or conclusions or be too didactic saying, "This is the way it is." The fact that we weren't making conclusions allowed us to be more open.

What is the reality of the drug war in Mexico? Is the international media blowing it out of proportion?

Naranjo: I think that it is worse than anyone in the world knows. It's because we are just watching what comes out. We see the pain of so many people and how this has touched so many people-it's much, much worse. In any war, in any real tragedy, we don't even expect the pain and the sadness that this thing is carrying. How can you? How can you get that sense? This thing seems so distant.

Luna: If you think about it, we aren't even close to an end. We already have crossed the threshold of 50,000 people who have died. I was told that even Vietnam has less than 50,000 people killed from the States, American citizens. You know the wound that's there from that. So imagine this, because people keep saying that it's just a war between the cartels,and sometimes they're killing people. It's huge, the amount of loss this has brought. What's terrible isn't only that there isn't a solution that we can see nearby, but it talks about the structure of the country. It's a country that's not even giving people an option. There are many that choose to have that kind of life rather than what the country offers. How many people are leaving the country and going to the States? It's so sad. The important questions, the ones that got us into this place are not even addressed, which are about education, the distribution of wealth and these things.

But few are talking about the demand for drugs, as well. Couldn't the war be stopped if people around the world stopped doing drugs?

What it breaks down to is that the drug cartels actually represent Big Business, and Capitalism. They are selling a product because the demand is there. They tried to curb the demand in the states with expensive failed drug awareness programs. In Mexico, do people place the blame internationally on the demand?

Luna: The money that is invested to try to stop this is typically wrong, too. Building a huge wall between the U.S. and Mexico makes no difference. If no one really tries to attack the market and the demand, and someone doesn't stop the guns coming from the States coming to a country that is living at war, then this is never going to end. It's quite simple if you look at it like this.

Have you experienced this violence in your daily lives?

Naranjo: I think that the fact that in the world, you will never know if a piano will fall on you, but when you get up in the morning here, you are worried for your loved ones. You think they might find a shootout or some of this random violence that is happening. You're aware that you will see a shooting, and you will have to go around it. The fact that we are worried is why we made this movie. The fact that we are not part of this 50,000 people who have died is just luck. Are we just going to be part of these thousands of people? Or are we going to try to fix it and talk about it as an organized society and a group and not have to trust our luck. Every time anyone tells me that maybe Mexico is not that dangerous. But if I trust that, I don't know if I am going to be naïve. What the movie talks about is fear rather than that possibility of being killed.

Each time I've been to Mexico, most Mexicans have this idea that the violence is somewhere else, somewhere not where they are. Is that accurate?

Luna: There are many levels of violence, there's different realities. There is Ciudad Juarez, which is not the same as Tijuana, which is not the same as Aguas Calientes, where we shot the movie. But this war has many faces, many forms. There's the cartels fighting for territory, then there's the war happening from the government, the other is the war happening inside the government. You try to go out, then suddenly a bar is taken over by a cartel, or the government. That's level of illegality and impunity that we are living in. [To Gerardo]: Did you see that guy who beat up that parking attendant? It was a rich guy beating up a guy who is supposed to be there to help him get his car. He goes over and beats up the attendant, and nothing happens to the rich guy who decided to punch another human being.

Naranjo: He just paid it off so that they would put the charge away.

Luna: They paid it all off. This is that kind of impunity that is happening in our country. And it's not the drug dealer beating up someone, but it's the reality that we're living. No legality, no justice.

Do you feel afraid of the consequences of your film?

Naranjo: No, we feel angry.

You don't think the cartels will try to go after you?

Naranjo: I think that we are attacking a society that lets weak people be abused. Yes, there is the idea that we could be attacked. We're not worried about that. We are worried about whether we can keep living like this.