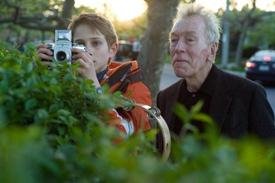 When you've played both God and the Devil, there can't be many challenges left for an actor. But for more than 60 years, Max von Sydow has managed to find them, in films great and small. After first winning America's attention in 1973 as Father Merrin in The Exorcist, the Swedish actor has fought back against typecasting to work with acclaimed directors in roles that some how manage to be different than almost any of his more than 100 credits. In his latest film, Extremely Loud and Incredibly Close (based on the book of the same name by Jonathan Safran Foer), Von Sydow plays The Renter, a mute and mysterious man who moves in across the street from 9-year-old Oskar Schell (Thomas Horn), a boy with an unusual way of coping from the death of his father in 9/11. Boxoffice sat down with von Sydow in New York to talk about how he continues to find inspiration and acting challenges.

What did you draw upon to play The Renter? He's different in the film than he is in the book.

Well, I got the script and read it and loved it. And I read the book, yes, which gives certain explanations to certain things, but not very much. I mean, I would say it doesn't really affect what was in the script really. I don't know if I did a lot of work, but it's all in the text I think. It was all in the text. It was wonderful.

And you couldn't speak. Does that change your job?

There is no difference. I mean he's a normal person in every way. The only difference between him and other people is that he doesn't speak, that's all. So he speaks, but he speaks through his texts.

How tough was it to sort of get down the rhythm of having to write everything? It seems like being able to do that and keep a scene moving would be just a technical challenge.

Yes, it is. At first I thought, "God, it takes time to write all these messages. Does the film really allow a character to spend so much time writing?" But of course, there are so many ways to kind of cheat a little bit here and there. You'd see that I take the book and I start writing and then they show images of other things, of the boy or whatever, and then I'm back showing the completed message. So that is a problem and then it was suddenly no problem-but there was a lot of writing.

Given that this movie is about such an iconic and emotionally-charged event, is there anything that you can do as an actor to make sure that the movie is not exploitative, or too sentimental or melodramatic?

Yes and no. I mean, that is up to the director to decide, but getting into this I had total confidence in what Stephen Daldry was going to do. And what can you do? There are thousands of people who are more or less directly involved in this tragedy and they have all different angles-this is a story about a little boy who finds his own therapy. He doesn't know that that's what he's doing, but he brilliantly finds his own therapy because he had this great relationship with his father and hopefully it should give something to the audience who have their wounds maybe still open.

How was it working with a young actor who certainly doesn't have the same experience you do?

Well, it can be very difficult. It can be very tough because they don't know. They don't know how to handle the lines. But in this case, there was no problem at all. On the contrary, it was a pleasure. It was amazing, this young man who hadn't done anything before in films or whatever and in any form of show, really. I was very impressed as everybody was, but it was also interesting to see because we came here earlier this year for wardrobe fittings and that sort of thing for a couple of days, and I met him then and he hadn't done anything yet. He was just chosen and Stephen put us together and had us reading some scenes just to try it. But then I went back home to France and came back when he had already been working for about a month, and by then he was a professional actor. It was amazing, amazing—and very quick. He is very intelligent.

You two share an incredible scene where he's playing these answering machine messages and you're reacting trying to get him to stop. SPOILER WARNING

Well, it's just to figure out a man with the background he has. He has left his wife a long, long time ago when she was pregnant with the child and he left and he-so we don't know what kind of contact he had after that with his ex-wife, but apparently stayed away from her forever since then, but apparently at the same time he knew that he had had a son and he apparently knew the name of this guy and apparently after 9/11 he has somewhere in the newspaper seen a list of the victims and found this name and decides to find out what happened: who was he really, and was it him, and is there a grandson somewhere? So he contacts his ex-wife and she is very upset, but allows him to live in the room in her apartment and on the condition that he doesn't disturb her or her grandson or his mother, who lived across the street. But of course they meet and then well the film follows. But the scene you are mentioning is a very complex scene in a way, but interesting because it's a remarkable encounter between three generations. It is the grandfather, who has abandoned his wife, who for the first time meets his little grandson, who he has never met before and who doesn't know that he is his grandfather. At the same time, this little grandson shows him or plays to him the voice of his son whom he has never met. It's the first time he hears the voice of his son and it's just a few moments before he died. I mean, it's a very remarkable encounter between three generations in a strange way, where one is absent.

You've played so many different kinds of characters and had so many interesting sort of acting experiences. Does it get easier to handle these tough scenes than it might have been 20 or 30 years ago?

I mean, the longer you live, of course the more things you pick up and some of it stays in your mind, but I don't know. No, well-yes, maybe. Maybe a little bit.

Is it hard to find roles that continue to really challenge or satisfy you? You've been doing work like in Shutter Island, The Diving Bell and the Butterfly—do you search to find those roles, or do they come to you?

Well, I'm not crazy about working anymore, really. If there is something really interesting, fine. But the trouble is when you've been around for awhile that the casting directors sort of put a label on you, say religious parts or they Nazi officers or whatever: "Ah, we need one, okay. We'll take him. He has done it before." And that is very boring for an actor. You don't want to repeat what you have done before, and so in this case it was certainly something new. I've played grandfathers before, but grandfathers very rarely are particularly interesting. They are in the story because they are old and they are grandfathers and but most of the time they are sick and most of the time they die in the middle of the script. And that is not particularly interesting either. But this is certainly a very special grandfather and it was a pleasure to do.

Are there any filmmakers left that you still want to work with?

Yes, it would be wonderful to work with Clint Eastwood or with Almodovar—or with Woody Allen, whom I have worked for once already. Certainly Soderbergh or the Coen brothers. But I'm open for good suggestions.