close
OPINION: 'Haywire' damn well should be a huge hit. But will iffy marketing hurt it?

'Haywire' and the Importance of a Good Trailer 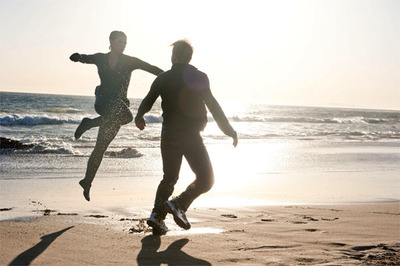 It's fitting that the first and last words spoken in Haywire are "oh shit", because the film is essentially an unbroken stream of moments guaranteed to draw that response from the audience. Haywire is a smart, deliberate, and beautiful take on action movies and exploitation films that is as unyielding as the character written for its star, MMA poster woman Gina Carano, and if it doesn't end up launching a brilliant film career, it at least deserves to be a massive hit.

Unfortunately, Haywire's advertising has been a mess.

This is partly by necessity. The film is crammed with extremely high profile talent but it's anchored around Carano, and she's a largely unknown figure outside of the still-semi obscure world of MMA fighting. It makes sense then that advertising would emphasize the Michael Douglas, Antonio Banderas, Michael Fassbender and Ewan McGregor instead of its less famous lead. The problem is that in seeking to suck in audiences unfamiliar with MMA or perhaps not drawn to the theater by the power of Soderbergh's name (who such people are, I have no idea), trailers have badly misrepresented the tone and style of this remarkable movie.

First, a closer look at at how Haywire is being sold. Here's the first official trailer.

Awesome? Kind of. Everything you see happens in the film. But the problemsbecome more obvious in the much shorter second trailer you're far more likely to see on the teevee than the 2 minute, 30 second monster above:

Both trailers add effects that aren't there and quick cuts that imply rapid-fire, highly stylized combat and super slick production values. The second trailer is particularly bad about it, going so far as to imply a 300-style 'ramping' effect all over the movie. I admit that the first trailer almost gets it right. Haywire's two major fight scenes are given prominent (almost spoilery) priority. But the plot is completely spoiled (though if we get tripped up on the film industry's underestimation of the filmgoing public, we'll be here all week.) The second trailer, on the other hand, might as well be for a different film entirely.

That's a shame, because Haywire may be the first time in years that someone has managed to make the old fashioned, ass-kicking beat down movie truly interesting. The plot is pure potboiler, the usual nonsense about double-crossing jerks and the muddy morality of hired badasses. We love that kind of thing, as we should, but it's not new stuff. What sets Haywire apart? In part, it's Soderbergh's voyeuristic style applied to action. Each of the film's excellent fight scenes have an almost sexual intimacy to them, particularly the 3 centerpiece fights marking the beginning, middle and end. They display subtle distinctions reflective of the personalities of Carano's 3 opponents and their chemistry with her; that she has been sexually intimate with 2 of her opponents and pretended to be so with the third is a huge part of why this works. (There really is a straight line from Sex, Lies, and Videotape to Haywire, honest.) Combat is brutal, wince-inducing, and choreographed to look heavily improvised. At times, the fights turn into outright grudge matches and almost begin to resemble depictions of domestic abuse.

Anyone who's ever watched MMA knows that fights can often feel somewhat anticlimactic compared boxing. Fighters train not for showmanship, but to win by any means necessary, hence lots of chokes, blocks and holds rather than a boxing stance designed as much to maximize the audience's view of the fight as it is to deliver effective blows. Soderbergh manages to perfectly utilize Carano's raw charisma and expertise as a professional fighter. That, and not a sideways attempt to lure in people who love Taken, ought to be Haywire's selling point. Instead? Every person with whom I've watched the second trailer has immediately said some version of "This is obviously going to suck"; barely better, everyone with whom I've watched the first has said "it might be OK'. Yes, both trailers feature Gina Carano doing what she does best - elegantly kick ass - and both make the words 'Soderberg' and 'Rated R' very clear. That they come so close to doing so, at least in the first trailer, only to veer away at the last second, is frustrating.

Haywire completely upends the traditional way that combat sport celebrities make the transition to narrative film. In an earlier decade - the 70s and 80s, really - Carano's career trajectory would probably have had similarities to Jean Claude Van Damme's, meaning a slew of low budget, rush-produced martial arts dreck, before finally blowing up in the mainstream. Instead, she begins her legitimate film career in the movie that reunited Soderbergh with Lem Dobbs for the first time since 1999's The Limey. That it's yet another work of casual brilliance on Soderbergh's part isn't shocking; that it turns out Carano is more than able to carry a film largely by herself kind of is. It is her gifts that ought to Haywire's chief selling points. In fact, were I declared king of movies for a day, I'd order a recut trailer that focused largely on the fight between Carano and Channing Tatum, minus the implied 'ramping'. Alas, we go to the movies with the trailer we have, not the trailer we want, so do yourself a favor: ignore the marketing for Haywire and just see it. Take three friends if you can.

After, maybe we can have a beer and cry over the fact that Carano won't be giving us another Bloodsport.