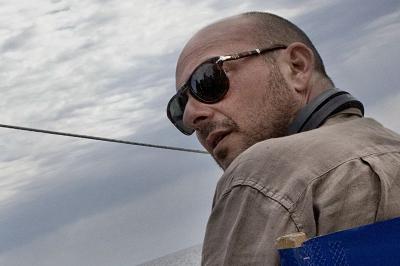 Writer/Director Emanuele Crialese's film Terraferma, which boasts the distinction of being Italy's official entry into the Oscar race, tells the story of a young man named Filippo (Filippo Pucillo) and the life he lives in a fishing community on a small Sicilian island. A run-in with illegal immigrants forces Filippo to pick between the ideals put forth by his grandfather Ernesto (Mimmo Cuticchio) and his Uncle Nino (Guiseppe Fiorelli). Should he follow the rules of the sea that his grandfather abides by or should he do anything he can to preserve the island's reputation as a tourist trap like Nino would like? Boxoffice recently spoke to Crialese about his emotional new film.

Filippo's mannerisms are very similar to his grandfather's, and that kind of foreshadows his decision at the end of the film. Did you work with the actors to accomplish that or is it something happened organically?

Normally before shooting I take a couple of weeks to work with the actors. Working with actors for me is working with people. I have to find a way to communicate with them and get to know them. I like the ticks and I like the imperfections of my actors. I want to make them feel comfortable about what they don't like about themselves.

I worked with Filippo since he was nine years old, so I know the kid very well. This time I really asked to him do something more with his acting. He's not watching television and he's not going to movies because there's not a theater on his island. In a way he's an acting virgin.

As a director, do you like it better that Filippo doesn't come with the baggage of acting school?

I like for the people who act for me to come with a fresh look. And I like to look and observe human nature in the raw state.

Mimmo is a puppet master, so he has a grand and theatrical approach to acting. With him I had more of an issue, because he was the opposite of being natural.

To put two different actors together really worked. Mimmo saw that I liked Fillipo's naturalness, and then the old started to observe the young—Mimmo started to behave in a more natural way. Filippo really helped me with Mimmo. Filippo went to him and told him to forget about the puppets and the theater.

Did it surprise you that the older actor learned something from the younger one?

Mimmo had his place in the theater world, and he always refused to make movies, so it was a real challenge for me. The simplicity of Filippo's approach put Mimmo in a very comfortable position. Seeing me support Filippo's attitude made him feel more relaxed. I love putting an actor together with a non-actor. There's a chemistry that really works.

Were Filippo and Mimmo able to become friends off the set despite their age difference?

Absolutely. They became like grandfather and grandchild. Because we were shooting on an island I could observe them off set, and I noticed they were really getting along. They were going fishing and hunting together.

One of the themes that struck me about the film is the notion, which is presented via the Nino character, of keeping harsh realities of the outside world away from paradise. Do you think there's something that other, non-Italian cultures can take away from it?

I really don't know. I do recognize a certain universality in the question. I would like to pose it as a question instead. I don't know the answer. I think we always want to portray an image of ourselves that is better than what we are, because we think we are better off that way.

More American moviegoers are going to be seeing this film because of the Oscar attention. Is there something in particular that you hope they will take away?

My approach to moviemaking is not analytic. Your question is a question that I always ask myself. When I write a script and shoot a movie I don't aim to a specific goal. Sometimes I like to pose questions more than answers. For me it's very difficult to conceive a film with a message. My communication with the audience—any audience—is tell me how you feel and what you think. The best part of my work is when the film is over and people tell me what they saw. Things that I might not have thought of have popped up.

Do you think today's audiences are running away from ambiguous films?

I don't think it's the audience. I think it's the production side that asks too many questions. For me, making movies is about opening doors and it's up to the watcher to go through. That's when the magic happens. I don't want to make a movie that has all the answers in it. That would be no fun.