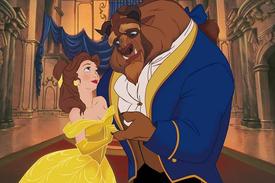 Is Belle's voice the same as your own?

This being 20 years ago, I actually used my own voice but softened it. My voice is lower now that I'm over 50, but they pretty much wanted my own voice—they wanted it to be very realistic. Instead of projecting like I would on the Broadway stage, I just softened it and used the microphone.

How different is her voice from the rest of the Disney princesses?

I think there are some similarities between Jodi and myself—Jodi Benson was the Mermaid—and a little bit of Cinderella. We're all kind of similar, but we all have our own quirks and different cadences in our voices. We're all unique in our own ways, but there's a quality that Jodi and I have that is pretty similar.

And on that same note, the songs and the style of the singing in The Little Mermaid and Beauty in the Beast seem to have influenced a generation of singers.

It's amazing. That's the brilliance of Alan Menken and Howard Ashman—they really were the caliber of Rodgers and Hammerstein. The music they made was so timeless, with the exception of Aladdin for which they purposefully wrote a pop-style score. Beauty and the Beast, they went for the old-fashioned Broadway sound, which is why I think it will be timeless like Rodgers and Hammerstein because that music has no date put on it, no style—it's a Broadway-legit score. I think that 50 years from now, those songs will be just as popular.

Which one do you love singing above all of the rest?

I love singing all of them, but my favorite is "Something There." When they're feeding the little birds and the bird hops on the Beast's paw—I think that's the moment she realizes she's falling in love.

After the film, what changed for you?

Oh my god. It was a life-changing experience because as a stage actress, performances are forgotten. But the film is forever—20 years later, it's still my job. It's a wonderful job and I'm still being asked to meet young people. Every six or seven years, there's a new generation of young people who fall in love with Belle. Showboat, my performance on Broadway in 1982, will be forgotten. It's a lifelong experience. I'm a painter at Disney now, I got signed to Disney fine art two years ago. As an artist, I can't want to see it in 3D.

You'll be watching it in a completely different way.

When you see Belle, do you see only Belle or does a piece of you say, "That's me!"

Both. Both. Because of all the characters I've played, Belle is probably the closest to Paige. I think that's partly why I got the job—it was such an easy fit for me. I understood her. And consequently, the artists and director of Beauty and the Beast, when I would try to make her younger, they'd say, "No—she's an old soul. Don't try to make her sound younger like Snow White. We want her to have the soul of a person much older than her years." So that was kind of amazing that it really did just fit like a glove.

Co-director Kurt Wise said there's a little bit of Judy Garland in both you and Belle.

That's so funny because I grew up idolizing Judy and this past year, I played Judy for the first time in a musical. It's the story of Judy's life and it actually starts when she's 47-years-old and dies and then it's told in flashback. It's amazing to actually be playing Judy after all these years. And acting her, because Judy's an amazing actress as well, she's very, very funny.

You were saying Beauty and the Beast gets rediscovered by a new generation every few years—you must have younger relatives who think you're the most famous person on the planet.

There was a reunion of the Disney princesses this summer at D23 and I was struck by the fact that for only showing your voice onscreen, all of you princesses are very, very pretty.

Aw, well thank you. It's so funny that the animators would take aspects of all of us, our mannerisms and certain features, and incorporate them into the characters that we play. I love the fact that Belle was a brown-eyed princess. Over the years, I've gotten a lot of mail from little girls writing to me and saying, "I'm so happy Belle has brown eyes like me!"

What else of yourself do you see in her?

Growing up, I was always a bit of an oddball like Belle. I loved George Gershwin and I was in theater, so that made me a little different. And I loved the fact that she wasn't searching for a man for her dream life—she was searching for knowledge and adventure and a better life for her father and herself. She happens to fall in love with the Beast, but that's not her main focus. That makes her a very contemporary person for that time period, and the fact that she was a bookworm—in that era, a lot of women didn't even know how to read. I'm certainly a little bit of a geek in that way, and I totally just embrace her.

Princesses get a bad rap as role models, but Belle is stronger than Snow White or Cinderella.

Absolutely, and what doesn't get acknowledged enough is that Belle—really, without hesitating—sacrifices her life for her father. That is just such a courageous moment in the film and I think it's not talked about enough. It's funny, when I was growing up I'd always say to my mom, "How do you know when you're really in love?" And she'd say, "If there was a fire, would you save yourself or the other person? If the answer is the other person, he's the right one." Belle's father was more important to her than herself and I think that's just an amazing quality.

And in this version, they've changed it so the sacrifice is her idea. In the original, her father forces her to go.

I'm glad you brought that up because that was a very important choice that they made consciously. Linda Woolverton [the writer] said it was a very important decision to make her the strong one. There's so many levels to this movie. I go back a few years later and I go, "Oh my gosh, the writing is so brilliant-they really knew what they were doing!"