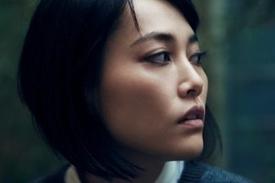 After being nominated for a Best Supporting Actress Oscar for Babel and co-starring in The Brothers Bloom, Rinko Kikuchi returns to American theaters in Norwegian Wood, artsy Vietnamese-French director Tran Anh Hung's adaptation of Haruki Murakami's best-selling novel of the same name. In Norwegian Wood, Kikuchi plays the mentally fragile Naoko, a 20-year-old girl who falls into a deep depression after sleeping with the best friend of her childhood sweetheart and first love. In this interview, Kikuchi describes the mysterious forces that drew her to the role of Naoko, explains how the film's turbulent '60s backdrop is important to the film, and expresses her fears of being typecast in Hollywood after just two films.

I read that you worked very hard to get the director of Norwegian Wood to consider you for the part of Naoko. What aspects of the character drew you to her?

I never compare... I think I shouldn't compare novels and films.

Norwegian Wood is a very popular book in Japan, especially among young people. Did you feel nervous about capturing a book that is such a cultural phenomenon?

Yeah. It was a really big challenge, but sometimes we should take some risks for art, for film.

Can you tell me how you prepared for the role of Naoko?

So there were not too many cultural differences?

Yeah. Also, we read this book over and over again. He's a really picky person and he wanted to get everything perfect.

Do you think that the film's 1960s time frame, when there were so many crazy things happening in Japan, is central to the story between Watanabe, Naoko, and Midori?

Yeah, that's a really important background. Because around 1969, everything is happening, changing in Japan. So that's why the background was really aggressive and changing everything, but Watanabe is really calm and beautiful, fragile, poetic. So it's a contrast.

If the 1960s time frame is all about change, it seems Naoko is the one person who couldn't change. What was it like to work with a foreign director whose Japanese is not very good?

So Tran and me, we were on the same page always. Because I really respect his work. And also, he tried to, he trapped me in the shoot. So I don't know, I don't care about the language. We have intuition to make the film.

Your next two films are in English. You have the film Pacific Rim with Guillermo del Toro, and you have 47 Ronin with Keanu Reeves. Did you want to have roles in non-Japanese language films?

Can you give me an example of something you've learned from working with a foreign director?

Now, I'm working with Guillermo. Guillermo makes me happy when I finish a scene. I don't know why. He's happy, that means I'm so happy. It's not that Japanese directors don't make me happy, but it's a different color, different materials, a different way. So I think it depends on the director. I don't want to categorize like, this is a Japanese film, this is an American film. I don't want to get typecast. I just want to get completely new experiences.

Do you feel there is some danger of being typecast for you?

What is the type of kind of role you'd be typecast as?

So maybe Rinko doesn't speak much, she could act like a sad, desperate person.

So you don't want to be the sad, nonspeaking Rinko anymore?

I heard that in 47 Ronin you're a witch with white eyes? Is that different from the sad, nonspeaking roles you were talking about?

Yeah, it was completely new stuff. Because I've never done that kind of invisible character.

Yeah, I really like that role. Because who do you know who is a witch? Have you ever met a witch?

Maybe. Maybe she was a witch and I didn't know.

So I didn't have much idea about witches before I got this role. I could make up in an original way. Yeah, that made me happy to get that role.

Are you still living in New York?

Do you think living in New York has changed the way you see film or acting or your acting technique?

I don't know yet. Because I was in Budapest, London, LA for the film. I have my own place in New York, but it's not my hometown right now. So I'll find out.

Do you have any system now about how you will choose your roles in the future?

I don't know. It depends on my intuition. I can't stop working in film. I'll keep working. If I get a script, I'll read it. And I feel, okay, I can do that, then I'll do that.