Satan's Scribes: Meet the Men Who Wrote 'The Devil Inside' 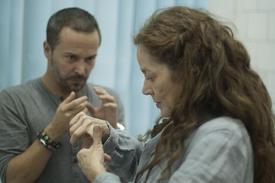 Sure, audiences famously hated their ending. But that hatred is only famous because so many people went to see it—and wanted to see more. But what matters most to The Devil Inside director William Brent Bell and his co-writer Matthew Peterman is that actual priests liked their movie. So they screened it for one, and guess what happened.

The possessed woman who bends herself into crazy positions-is that actress, Bonnie Morgan, a real contortionist?

BRENT: She is, yeah, that's what she does for a living pretty much. She's a stunt woman, circus performer. She rides elephants. But she wants to become more of an actress.

Did you audition other contortionists or was she your choice from the beginning?

BRENT: Actually, we tried to, but everybody else was like a cheerleader. We saw her really quickly and we were like, "Well, can she act?" And when we met her in person, she was amazing. She showed up at the second audition with three languages—she's a contortionist with her voice, too. She can do anything with her voice. And she's fearless and nuts.

What were your conversations like with Suzan Crowley to prepare her to play the possessed mom?

BRENT: They say that directing is 80 percent casting, and in casting that role, you're casting an older middle-aged woman like a lot of our mothers and it's really hard for them to be that fearless and crazy. She stood out from everybody—there was nobody even close to her in the auditions. She went through all these different dialects and characters in a three-minute audition scene.

How did she come up with her different crazy voices? Did you research tapes and bring them to her?

BRENT: You know, I'll be honest with you: if you went and had dinner with Suze tonight, she would just bust out in voices in conversation. She's one of those people who just tells stories—that's just who she is.

Are you ex-Catholic school boys with a grudge?

MATT: No! I'm Catholic, and we don't really consider the movie anti-church at all. We just feel like it's kind of a realistic take on the battle of good versus evil. We're just trying to shine a light on that.

BRENT: And at the end of the day, we're fictionally proving that there's a Devil—and if there's a Devil, there's a God. So it's a pro-religious movie more than anything.

Have you watched it with any religious people?

MATT: We did a screening at a church a couple weeks ago and there was a priest there blessing people. We didn't know how that was going to go, but then he came up to our lead actor Simon [Quarterman, who plays Father Ben] and the real Catholic priest just loved the movie and he loved Simon's performance. That was pretty awesome.

Was it that he connected to Ben's struggles with faith?

BRENT: The first thing he said was, "Who's the real priest here, him or me?" The thing about possession is the Catholic church is very secretive—we couldn't get anyone to speak on camera. We tried 10, 20 of them. And so for them to see a fictional film that feels real, it's kind of like coming out of the closet a little bit. I think they enjoy it because otherwise they're hiding in a way. The shame about what the church does that they're treated like witch doctors or something.

MATT: And we did copious amounts of research and interviewed a lot of priests and exorcists, and we put that stuff into the film. So I think when those people see the movie, they're going to see a lot of their reality—that's probably why they enjoy it and find it authentic.

What are some of those things that were really, honestly real?

MATT: The scientific elements we incorporated were very accurate. Certainly the multiple demonic possession and transference—these were all researched topics from when we studied Demonology and talked to the priests. That kind of stuff isn't in a lot of movies with this subject matter, so I think when they see them, they go, "Alright, these guys know some things that we didn't know other people knew about."

BRENT: And honestly, we followed the rules of exorcism. First and foremost, they have to find out if the person is mentally ill. They have to see if they fall into any of the four major categories of demonic possession. They need to try to break down the hierarchy of the demons when one of more of them is in somebody—it's a lot of rules. Most exorcism movies, there's a lot of Latin and you don't know what they're doing. It was fascinating to learn that there's a real science to it.

I can't think of much Latin in your movie—it's all English.

BRENT: Totally. There's a real process to it.

One of the big challenges when you're doing a found footage movie is you can't use music to heighten the tension. How did you work around that?

BRENT: I know! It's tricky. It's a big challenge. There have been some films similar to ours and when you watch them, they're sneaking in music. I'm sure it wasn't even in their control because it's very easy for a studio to go, "You have to have music here, guys—it's just too stark and boring." It was a good challenge and what we tried to do during the exorcism scenes in particular, which of course would normally be really helped by score, was to take the sounds of the scene like the EKG monitors and utilize them almost as scores to build a bed of sound underneath the scene.

And the toughest scene to watch—the suicide scene—is also one of the quietest and stillest.

MATT: That's one of our favorite scenes. We're pretty proud of that whole sequence. If we can be proud of a priest blowing his head off.

So when you're trying to make found footage feel real, what do you add to the film? For one, I noticed you added the tension between your main characters and the cameraman.

BRENT: One thing about that camera is Gonzalo Amat, who was the cameraman [the actual cinematographer, not the actor playing a cameraman] is basically playing the fourth character in every scene. He had to know every bit of dialogue and every beat of those scenes so he could capture it perfectly, but because the camera always had to be behind the dialogue. If it's ahead of the dialogue too much, it feels contrived. So he had to learn to be just a hair behind what was happening so that it would feel like he was capturing it organically. Sound-wise, we just tried to make it really real: we tried to make the sounds and the background really ordinary so that it didn't feel like you were on some sort of movie set. We had to keep the dialogue sound not too rich and perfect. Just embracing the imperfections of film when normally you're fighting to make it perfect.

By coincidence, the New Yorker just ran a piece with Heather Donahue who starred in The Blair Witch Project, saying that starring—and being killed—in a found footage film almost ruined her life. No one could get over the fact that she was actually alive and her name was still actually Heather.

BRENT: You know what? We're lucky because we did make the movie starting in Hollywood, so we were able to find really talented actors who were just not yet discovered. A lot of times in the found footage movies that get made, they're not very trained so when they get the opportunity to express themselves in Hollywood, they don't really know how to do it. Our actors know what they're doing in the Hollywood system, but I'm afraid that she probably didn't because she was so new.

She said that she became known as the "nose-running girl," and then she moved to Utah, I think, and became a medicinal marijuana farmer.

MATT: Is that true?!

It's true—it was in the New Yorker two weeks ago.

BRENT: Well, no wonder she's not doing anything-she's smoking pot all the time!

MATT: She gets stoned and maybe she sees the Blair Witch!

Are you all scared by the same things?

MATT: Morris [Paulson, their producer] is scared of clowns and midgets, Brent's afraid of ball-gags and big feet, and I'm afraid of long fingernails and women with mustaches. It's the little differences.

When you disagreed on set, how did you resolve it?

BRENT: The great part of having three people is that if I have an idea that I really like but Matt hates it, then it's like, "Let's ask Morris." And if Morris likes it, then Matt backs off—or vice versa. If you just have two people, you get into a stalemate. Three's company in this type of filmmaking.

How did you cast the Italians who played the locals?

BRENT: We had a separate casting team in Romania. All those people were Romanians who were fluent in Italian. Even Michael (Ionut Grama), the actor who played the filmmaker, is 100 percent Romanian. He came in for a different part and just had a perfect American accent and looked like a dude from New York. There's a lot of people in Eastern Europe who speak a lot of languages.

And Romanian is really closely related to Italian—it's basically the purest descendent of Latin.

BRENT: We don't understand Italian, but it sounded good so hopefully everything was right.

So Romanians are the new shape-shifters of Hollywood?

BRENT: Absolutely. They can do anything.

It sounds like you believe in possession. Were there any moments when you were in the dark shooting one of your exorcisms and you actually got a little scared?

BRENT: When we were shooting Rosa's scene, which is like in a basement in a 400 or 500-year-old house. We're behind the boiler room and when Fernanda [Andrade, who plays Isabella] went down there to see the set, she couldn't work for like half a day because she felt a presence down there. It kind of gets in your head when you're halfway through a shoot and all you're dealing with is the Devil and demonic possession—learning about it and teaching it and seeing it happen. Yeah, it kind of starts to freak you out.

Would you now recognize if one of your friends got possessed?

MATT: We would because now we know what the signs are—

BRENT: But I hope we never see it.