Ten Questions For 'Man on a Ledge' Co-Star Jamie Bell 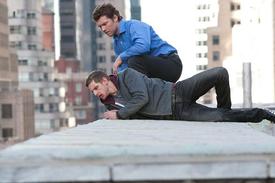 After firing up the box office as the star of Steven Spielberg's The Adventures of Tintin, 25-year-old British actor Jamie Bell is switching gears for something entirely different: a slick suspense flick where he and Sam Worthington play brothers with a vendetta against the NYPD. While Worthington is the titular Man on a Ledge balanced perilously outside a high rise hotel and threatening to jump, Bell sticks with his brother on the phone with the goal of getting him safely on the ground. After a career of ambitious period pictures like King Kong and Defiance and UK charmers like his breakthrough lead in Billy Elliot when Bell was just 14, this conventionally cool thriller might be the most unconventional flick he's ever done. Bell explains.

This is a movie where the audience has no idea what secret plan your character is up to until halfway through. How do you control that?

As an actor in a suspense thriller like this, it's crucial that you keep those important elements quiet. Even though you're portraying the part, you're always conscious about not giving too much away at any given moment. That's the whole point of a thriller: to have those thrilling moments when information is revealed. And in the performance, you always think that you are giving too much away.

You and Sam Worthington play brothers, but you barely have any scenes together. There's a pressure to make them count.

Absolutely. Only at the beginning and the very end of the movie do we actually interact. The shooting of it, Sam was pretty much done by the time I came on. But we had to seem connected as brothers even though we were rarely in the same physical space.

Instead, you spend most of your time on the phone through with each other, which seems like its own challenge.

Yeah, I hated it. My worst nightmare is to be cast in a movie called Phonebooth where you're not reacting to Kiefer Sutherland, you're reacting to some assistant director who's just feeding you the lines. Which is exactly what it was like working on this movie. I think that for an actor, that's awful—I have so much respect for actors who I see doing a really good telephone scene. Did you see Contagion? Gwyneth Paltrow's phone conversation at the beginning of that movie was brilliant. To perform it is so awkward because there's no one on the other end of the line. To try to get those rhythms of a real conversation is actually really tricky. So it's really f--king hard, it's really hard. Asger [Leth], our director, he was on our case the whole time—he wanted it to be as real as possible.

That's interesting because usually when audiences think of a tough scene to act, they think of people screaming at each other in a street—

Or crying or trying to induce tears, when the actor's recreating some kind of traumatic emotional experience in their own life. But I find it's some of the more subtle things like when someone's trying to faint or when someone's dying. Gwyneth's death in Contagion was amazing. Drunkenness. Things that we all know from our own experiences. When I'm on the telephone, it's really hard for me to stand still and I wanted to have that as a character choice. But the cameraman was like, "That's f--king impossible, it's never going to work. You have to stay still." I have a lot of respect for actors who really nail those habitual human moments.

And Asgar Leth is a first time feature director. Was that a leap of faith?

I worked with Steven Spielberg on Tintin, and Asgar has the same kind of common language about making a film, but is very renegade in the way he appropriates a film set. That energy is very exciting. It's a big risk on everyone's part—the producer's part, the actor's part—but then you have someone as confident and energetic as Asgar Leth, who definitely proved himself as a filmmaker with his documentary work. He won a DGA award for that documentary he made about Haiti [Ghosts of Cite Soleil]. He's a risk-taker and a fearless director-it's always fun to collaborate with those types of people.

This is a rare film for you in that its set in the modern day.

Yeah, I don't really think of myself as a contemporary person, I don't fit into this time zone. I think the '30s and the '40s is where I belong. I did a movie called Jane Eyre which is a very period, period, period drama. I thought I hated those movies, but then I made one and I really loved it. So, yeah, I rarely do anything contemporary. I just feel so attached to a different time.

Well, the '30s and '40s feel like a time when people made big, hard choices that affected the rest of their lives.

And it's really the time when cinema took off. The world was at war and film noir came around 'cause it was cheap to make movies like that. And that spawned a whole new generation of movie stars and great directors. I feel so connected to that era of Hollywood—especially European life—I just feel so much more comfortable in that time. I love listening to old music, too. My aesthetic is very Old World.

Would it be worth it to go back in time if that meant you had to live through World War II?

Probably not. But I don't know: if World War II hadn't happened, we wouldn't be here today. I'm not one to f--k with time or the events of history, but just for a second to be on a city street in New York in the '40s-coming out of the Depression, America's committed to war-but still the aesthetic of the suits and hats and the puddles and the potholes. It's a romantic notion, but I don't care. The period is so beautiful. I'm a big fan of photography and some of my favorite photography was '40s and '50s, especially in Paris. It's eye candy.

Because your face is hidden under Tintin's for the entire movie, is there a part of you that wants to wave your hands and say, "That's me, guys!"

Okay, so how did they do Snowy, Tintin's dog?

The dog is fully animated, there was never a dog on set. Everything in mo-cap has some kind of representation of what it will be in the finished product, so we had a piece of metal fashioned in the shape of a dog with a stick up its bum that our prop guy Brad would run around with at my heels. That's what we had to work with. It's a feat of animation.