'The Grey' Co-Star Joe Anderson: Acting Is About The Head Space, The Honesty, The Integrity And The Balls

Joe Anderson is the son of two pedigreed British actors, not that you'd know it from his biggest roles. He's done his time playing Jane Austen's older brother (Becoming Jane) and Joy Division bassist Peter Hook (Control), but his lean muscles, shaggy hair and ear for mimicry have made him Hollywood's new favorite redneck. Following his standout role as a Southern deputy in The Crazies—a must-watch performance in a b-movie that's terrific fun—Anderson was cast as Flannery in The Grey. A wiry punk with a big mouth, few friends but several ladies (or so he says), he's the type of all-American scruff who lives on adventure. That is, of course, until adventure tries to take his life.

You're British, and typically Liam Neeson plays an American. Since Liam was playing Irish, why weren't you playing British?

It was funny because when I walked into the room to meet Joe Carnahan, according to Joe, I kind of bounded into the room, and he looked at me and said, "You're Flannery," immediately. That was almost the first thing he said. Then I said,"Oh, okay" and that was that. We never really discussed it much more. He kind of told me who he though this guy was, and when he saw what I was doing, that was it. I think Flannery has to be American. I just don't think there are those characters in England. I think he's quintessentially something from over here. Well at least I think so because I'm from over there, so how would I really know?

No, there definitely is a sniveling British equivalent. The way things physicalize are quite different. It's one of the things I always have to be aware of. If I find the British equivalent, does he physicalize himself in the same way? Are the gestures the same? The American body language and way of communicating are actually quite different to European body language. And I know that sounds strange and such a small thing, but there is a definite difference.

And given the cold and the danger and the wolves, this is a very physical film.

Yeah, it was unbelievable. I didn't actually do that much with the wolves. We did some stuff around the plane with the wolves. It was a shame, actually. I was dying to meet these dogs and to check them out. To be honest, that would have been a treat, because the rest of it was sub-subzero and just brutal. We would jump out of the back of the Snowcat that we would be sitting in, that would be heated. And we would jump out and shoot the scene, and then jump straight back in again. Some days due to the nature of the scene, we would be out there for hours and hours and hours, and that was when it really became difficult. There are moments when all the guys are standing around sort of facing about and wondering who's going to crack. Who's going to say,"I just can't do this anymore!" in the middle of a scene? No one did of course because everyone wanted to power through it, but there were times when the cold does something to you. The importance of shooting a film, and the importance of everything, suddenly goes out the window when you're cold-and you were really cold. So it was a challenge sometimes to really stay in it, and power through that horrible feeling of being on the verge of hypothermia. 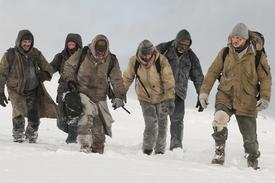 This is kind of a method-y question, but how into the character can you get if you know you have a warm place to go when you're done?

I mean if were going to talk honestly, I think it's different for every actor and everyone approaches things differently. But I think there are two ways of approaching something, and whether I take a month to think about this thing, or I have to think about it right now and just do it right now. The head space that I put myself in, or the way I allow myself to think about this character-or this situation, circumstances, whatever surrounds this is—is the important thing. I mean, obviously you're shooting a film. There is a camera in front of you. There are lights. There is a focus puller looking at you, pulling focus. There is a camera operator. How method can you really be? You've still got to hit a mark. You've still got to know that you can't suddenly lean forward because you're going to be out of focus. You can't really hit the person. It's just about the head space, the honesty, the integrity and the balls. The balls to be like,"Are you going to go for it?" Are you really going for it or just pretend it? Are you going to do it for real or are you going to fake it? I think you have to try to say to yourself, "No, no, no. Do it for real." I remember watching a whole documentary about One Flew Over the Cuckoo's Nest and Danny DeVito saying that the director was saying over and over again, "It has to be real." These guys are just watching themselves constantly just trying to get rid of the fake, and find it grounded. So whether you're in a Snowcat or you're in a trailer, it's the same head space you have to get into. It doesn't matter if you've got six months or five minutes. It's still the same approach.

You mentioned that your character was automatically an American man because of his job and his role there. As part of the bigger arc of the movie, what is the fate of your character saying about manhood?

I suppose one could look at it that way and say, "For god sakes boy, stop sniveling. Pull your shit together." Otherwise you're not going to make it. And therein lies the lesson. That is something to be taken from it. If you're going to be a person who is going to panic, and you're going to that place, then ultimately you will fail. Or at least the odds will be more greatly stacked against you. So I think it speaks greatly of that—but more importantly, questions are raised in this movie about doing it yourself. Liam has a line at the end when he's talking and he's calling on whoever his God may be, or whoever is up there, and he's screaming, "I'm calling on you," and he gets nothing. And he's in the middle of this wilderness, and he has this line which is, "Eff it I'll do it myself." I think there is something to that. Like my grandfather used to say, "If you've got to get the job done, you do it yourself." In terms of speaking about manliness-that a man is someone who takes the responsibility—it's like Dallas Roberts' character carrying Diaz [Frank Grillo]. He wanted to carry that idiot. That guy who's caused so much trouble because he'd given up in terms of manning up. In that respect, I think there are some really large examples made which are quite cool. But my character definitely sits on the other end of that spectrum.