close
OPINION: 'United Red Army' and 'Norwegian Wood' Shed Light on the Japanese Experience During the Age of Aquarius

You Say You Want a Revolution... 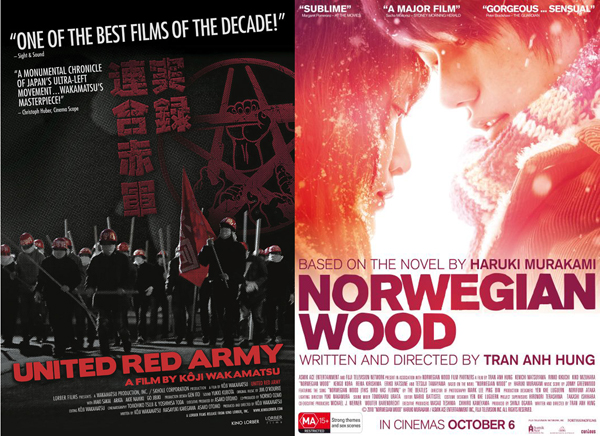 America isn’t the only nation currently wallowing in boomer nostalgia. Japan, too, can’t seem to forget the sixties. Like the United States (and pretty much every other country on the planet), Japan experienced tremendous societal upheaval during the 1960s, transforming itself into the world’s third-largest economy and a global cultural influence while angry nationalists, mobilized leftists, and indignant student activists took to the streets to protest the government and each other. Two recent Japanese films, United Red Army, released on DVD last week, and Norwegian Wood, opening in Los Angeles this Friday, revisit the decade that shook postwar Japan to its core from the perspectives of hopeful but troubled college students.

The austere docudrama United Red Army (URA) neutrally portrays the idealistic beginnings and bloody self-destruction of a confederation of actual extremist leftist separatist groups that sought to remake Japan after Mao’s China through armed insurrection. Most of the film’s action takes place in the first two years of the 1970s, but director Koji Wakamatsu firmly establishes those later years as the tail end of the “long decade” of the 1960s by introducing the student protests against the continued American military presence on Japanese soil in 1960 as the origins of the URA. For all their grand ambitions and passionate rhetoric, however, the URA never boasts more than thirty members at any point, thus rendering itself largely powerless, even pathetic. Its wannabe-revolutionaries, mostly middle-class college dropouts, regularly get themselves killed or arrested by the police,* and the cell’s two leaders, Mori (Go Jibiki) and Nagata (Akie Namiki), decimate the ranks further through ideological purges, ultimately ordering the deaths of twelve members deemed “reactionary” over three months. The venomous Nagata, the female co-leader of the URA, disproportionately targets the few other women in the group, denouncing their greater attractiveness as “counterrevolutionary,” and thus grounds for execution.

But many an authoritarian regime has survived, even thrived, on idealism’s curdling into homicidal dogmatism. The URA’s few troops meet their inevitable end when they go on the lam after police find their spartan mountain camp. Facing the harsh reality of an unsympathetic society and the vast resources of the local police, the five remaining members of the URA, including two teenagers, take a hostage in a remote vacation lodge. The heart-stoppingly tense but intensely poignant final third of the film recounts the ensuing ten-day standoff with the police. Until this point, Wakamatsu’s script and claustrophobic scenes offered no clues about the radicals’ experiences and convictions prior to joining the URA. But when their (unseen) mothers urgently beseech their children to end the siege (and apologize profusely to the hostage) through police loudspeakers, each URA member becomes instantly humanized and familiar. The youngest, just sixteen, breaks down and cries, “We had no courage,” atoning for condoning the murder of his comrades. It’s hard to say which is the more tragic: the rigidity with which the URA members pursued their utopian ideals, or the failure to perceive the hopelessness of their wholehearted efforts.

Student protests also occupy college campuses in Norwegian Wood, though seemingly in a different dimension than the ones in URA. Adapted from Haruki Murakami's more-popular-than-Jesus novel, French-Vietnamese director Tran Anh Hung shot Norwegian Wood through a lusciousness lens that makes every scene glow with dewy possibility. (And the clothes! Mad Men’s costume designers could take a lesson.) Blank-faced college student Watanabe (Kenichi Matsuyama) falls in love with the mournful and vulnerable Naoko (Babel’s Rinko Kikuchi), the girlfriend of his childhood best friend, who had inexplicably committed suicide a few years past. After Watanabe and Naoko have sex, Naoko grows severely depressed and retreats to a rural sanitarium. Meanwhile, Watanabe meets Midori (Kiko Mizuhara), a manic pixie dream girl with freaky anime eyes and a boyfriend, in his Greek mythology class. Watanabe sits and waits around for one or both of the girls to become available, because that’s the kind of goal-oriented, take-charge guy he is.

Watanabe’s melancholic transition from adolescence to adulthood takes place against the backdrop of the volatile sixties, but the film character’s utter lack of curiosity regarding the political turbulence that surrounds him makes him appear repellently narcissistic (and the URA members like frenzied if wayward Mother Teresas by comparison). In contrast, the female characters around the wan Watanabe enact a kind of microcosmic sexual revolution, collectively arguing for a modern set of sexual values—basically, doing it for the sake of fun and curiosity and exploration, instead of having each sexual encounter be fraught with Meaning and Responsibility. In fact, two female characters who can’t un-anchor themselves from the traditional sexual mores of marriage, family, and procreation don’t survive the sixties; the future has no place for the past, or so Murakami claims. So while Watanabe smokes a cigarette/finds his spirit animal/has the best bar mitzvah ever and becomes a man (yawn), the women around him undergo a nonpolitical but revolutionary change.

Hope is probably the concept that history will forever associate with the 1960s. United Red Army sees that decade as the one in which idealism reigned, right before it all went to hell in a counterrevolutionary handbasket, while Norwegian Wood argues that that idealism, or at least certain aspects of it, did blossom forty years ago. With its aging population, declining economy, and spoiled environment, hope might be the only thing Japan has to hold on to. Well, that and animatronic robots.

*Other leftist terrorist factions were not so hapless. The Japanese Red Army, for instance, killed 26 people and injured 80 at an Israeli airport on behalf of the Popular Front for the Liberation of Palestine (PFLP) in 1972.