Behind The Scenes Of 'Big Miracle': The True Story Of How Three Whales Led To A Wedding—And Maybe The End Of The Cold War 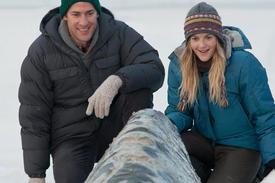 In 1988, three gray whales were caught under Alaska's arctic ice with only a tiny open patch of water to come up for air. How to save their lives? Drill airholes in the ice all the way to the ocean. Big Miracle tracks the unified rescue effort between Alaska's indigenous people, Greenpeace activists, and the American and Soviet armed forces at the tail end of the Cold War—the Berlin Wall wouldn't fall for another two years. Vinessa Shaw plays Kelly Meyers, the White House aide who coordinated the whale rescue with President Ronald Reagan. After a few phone calls with Colonel Scott Boyer (Dermot Mulroney), who heads up the military's team, Meyers falls in love with a man she'd yet to meet. Sound like Hollywood fluff? Surprise—it's based on the true story of Bonnie Carroll, who coordinated the White House's efforts to save the gray whales and in the process met Colonel Tom Carroll, a military man who would become her husband. Tom was later killed in plane crash in 1992, and Bonnie went on to start the organization TAPS for the families of military people killed on duty. Boxoffice sat down with both the fictitious and the real hero—Vinessa Shaw and Bonnie Carroll—to find out how they teamed up to put Carroll's past on the big screen, and how Ronald Reagan's decision to help the whales not only introduced Bonnie to her husband, but may have helped bring about the end of the Cold War.

Vinessa Shaw: We met on set. Bonnie was already there and she had already spoken with Ken [Kwapis, the director]. I was very nervous to meet her because her reputation had preceded her in the most amazing way. She just grabbed my hands and said, "Isn't this exciting?" She was so vivacious and bubbly, I was immediately disarmed. We talked for almost two hours.

What did you talk about in those two hours?

Bonnie Carroll: Vinessa has an incredible life beyond being an actress. We had quite few things in common and true to the Big Miracle theme, we were talking about how we could bring collaborative efforts together for the betterment of the world. We were thinking big picture, totally separate from the portrayals in the movie.

What was the biggest surprise for you, Vinessa, about meeting Bonnie in person rather than just reading about her on the page?

Vinessa: I was surprised by her big smile. Having read all about her and what she has done and what she does now with her foundation that supports someone who has lost someone in the military, I thought that it'd be exhausting to be someone who give so much to people who are in need, but she's more energized. People are so lucky to have her to help them get through tough times. She is a great example of that, having lost her own husband. I think that was not a surprise, but it was an encouragement, that she has more life in her considering her tough circumstances.

Bonnie, you were on set for much of the movie. Was this your first time working on a film?

Bonnie: Through TAPS, our organization that provides support to surviving members of a military families, we have actually had the chance to be technical advisors on other films that are connected to casualties in the military, a very serious subject. But what an experience, to be on set in a film that includes a chapter of your own life. Such an amazing chapter, too. It was like connecting with my husband who was killed tragically in an army plane crash in 1992, so it's been a long journey—and to go back to that incredibly happy time was wonderful.

What was it like for you to sit down in the theater and see your life on film?

Bonnie: It was nerve-wracking. Cindy Lowry [the Greenpeace activist who Drew Barrymore's character is based on], Ken Kwapis, the director, and I met in New York and watched the movie together just the three of us. It's so beautiful and so well done, and Ken did such a magnificent job that Cindy and I realized afterward that we were holding on to every moment. Of course, I was looking forward to the end of the film where it has our wedding.

In real life, how did you get swept up into this story?

Bonnie: I had the opportunity to work in the West Wing of the White House for Ronald Reagan, who was an incredible person, a visionary and a leader, and he actually stopped by my office late one night, and said, "Bonnie, there's whales on TV and it's something with the National Guard, so call someone you know up there and see how we can help." I started making phone calls and it was Ronald Reagan, in true presidential style, leaning forward, to help. He was constantly about helping anyway that he could.

We always have this notion that presidents are really detached from the everyday life. But presidents watch TV, too. When you were hanging out with the President, what stood out about him?

Bonnie: I was impressed by how engaged he was in absolutely everything, and how personally connected he was to his staff. He remembered everyone's name, from the service officers up. He was really taken with the whale rescue. He made the phone call to Tom [Carroll, who led the military response]. And as time went on, he found out that we were getting married, so he was really supportive of that. We had the White House jazz quartet at our wedding, and he wrote a note that was read at our wedding. He was so involved in this country and the world, and ending the Cold War. He had Mikhail Gorbachev over to the White House. He was supportive of the whale rescue being part of the end of the Cold War.

What did Reagan say specifically about how the whale rescue would help bridge the Cold War gap between the U.S. and the U.S.S.R.?

Bonnie: Tom called me in the West Wing of the White House a few days after our initial conversation. He said, "You know, there is something that President Reagan can do to help. Would he call Mikhail Gorbachev and ask him to bring some Soviet icebreakers over in this last ditch effort to save the whales?" And they did. They came, and Tom, who saw the bigger picture, flew out in an army helicopter and landed it on the Soviet icebreaker. So you had this American Colonel and this Soviet ship captain riding through American waters, standing side by side.

It's fascinating how this event could be politicized in ways but also how it could bring countries together. Did you actually get to go out to Alaska to see the whales when this was happening?

Bonnie: You know I actually didn't. They took a bit of license there, but I wish I could have.

How did it change your life?

Bonnie: It changed everything, I left the White House, I got married, I went to go live in Alaska. Literally everything changed.

And for you Vinessa, is this the first time you've played someone, while having great access to the real person?

Vinessa: Yes, this was the first time. And what a great first time because we actually have a lot in common, and we've developed a friendship since then. It was such a huge honor to play her, and of course, there is only a fraction of her whole story shown in the movie. I keep saying that just what I portrayed showed her in the best of lights. They did make her character a bit more snappy in the movie than Bonnie really is. Bonnie's definitely strong, but this character is a bit more sassy!