close
OPINION: The strange and long history of Acting Awards for Dogs -- And Why They're a Great Idea

Consider Uggie, and Blackie, And Cosmo 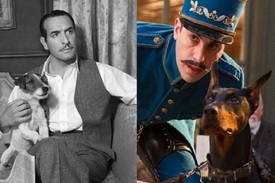 Cats may rule the Internet, but dogs star in movies. According to Susan Orlean's new biography of Rin Tin Tin, the very first Academy Award for Best Actor, way back in 1929, was slated for the wildly popular German Shepherd, who had by then starred in over twenty films. At the last minute, some skittish Academy members snatched the prize from Rin Tin Tin, concerned that bestowing an acting prize to a dog would discredit the Award. Eighty-four years later, little has changed. The Academy's reputation is still suspect among many circles—Manohla Dargis, for example, declared that "the Oscars are bullshit and we [critics] hate them"—and some people still really want to give acting awards to dogs.

Enter Uggie. Or rather, the Consider Uggie campaign, championed by Movieline editor S. T. VanAirsdale. VanAirsdale and his 10,445 co-campaigners on Facebook (as of this writing) demand that the Academy recognize the Jack Russell terrier's scene-stealing performance as the lively sidekick to the sad-sack hero of The Artist. When the Oscar nominations were announced last month with Uggie's name nowhere in sight, an online pet magazine called Dog News Daily announced the 1st Annual Golden Collar Awards for canine achievement in film and television, and nominated Uggie twice for Best Dog in a Theatrical Film, for The Artist and Water for Elephants.

A cutesy publicity stunt like The Golden Collar might have come and gone with some modest write-ups in entertainment and dog blogs and magazines. But then Martin Scorsese penned a semi-serious op-ed in The Los Angeles Times earlier this week, protesting the "severe slight" of Blackie's (the Rottweiler in Hugo) receiving zero nods from the Collar judges despite her impeccable behavior on set, dedication to her craft, and "uncompromising performance," while Uggie received two nominations. Scorsese all but accused the Golden Collar panel—most likely Dog News Daily's marketing director—of being struck dumb (pun intended) by Uggie's adorable tricks, as well as being "breedists." Thanks to Scorsese's clout—and the not-at-all ridiculous way in which he defended Blackie's honor—news of the Rottweiler's plight exploded, and she eventually received enough write-in ballots to get a Best Dog nomination. Disappointingly, Scorsese did not then march to the offices of the Cannes Film Festival and nail a list of 95 reasons on their door why Uggie should be stripped of his 2011 Palm Dog Award and Blackie bestowed it retroactively.

Needless to say, there are lots of good reasons not to give acting awards to dogs. Dogs don't understand—as far as we know, anyway—the concept of a film, or filmmaking, or the capturing of real-life images of people (or dogs) dramatically performing a fictional narrative that are later edited, reproduced, packaged, and projected via rapidly firing lights onto a movie or laptop screen. Thus, bestowing a Best Actor award to an animal that is in no way conscious of any step of the filmmaking process smacks of gross anthropomorphism, like calling one's dog a "furbaby." And even when they're winsome, dogs are pretty hammy: it's a safe bet that there isn't a single working dog in Hollywood that hasn't gone through the motions of putting her paws in front of her eyes. Even The Artist director Michel Hazanavicius has said, "I'm not sure [Uggie's] so expressive ... He's very cute, [but] he doesn't incline his head. He has really a stone face; he's not an actor."

But the idea of a Best Dog Award is still incredibly compelling for several reasons. First, while dogs aren't great actors, they are great pretenders. The popular belief that dogs embody unconditional loyalty and eternal innocence is as much a fantasy as a swooningly handsome archeology professor who swashbuckles across continents fighting Nazis on his days off. Most dog-owners will readily admit that their dogs, at least the smarter ones, can be pretty sneaky, eating candy and hiding the wrappers under the rug or jumping off forbidden furniture when they hear their owners coming home. And the difference between a well-trained dog and a clueless actor might well be negligible. Although many well-trained dogs don't know why they're told to perform certain tricks on a particular day, they do them reliably anyway. It's easy to imagine that certain actors - in particular, the very young, the untrained, or extras - don't do much more than a dog performing a trick on cue ("sit, walk, bow").

But most importantly, let's remember why, every year, Hollywood puts on its sexiest, frothiest, boob-baringest dress and puts on a show so lavish it would shame a Russian oligarch: to pimp itself out. The Oscars are a great revenue source: any nomination or win in the big categories—Best Picture, Director, Actor, or Actress—will slush millions of dollars into the coffers of that film's studio. And although the decade-old Uggie is now retired, an Oscar win for Best Dog is sure to be followed by a slew of commercial and acting offers, keeping talented and worthy dogs and trainers working. Hence, let us rectify the cowardice of the first Academy Award panel and freely hand out some golden doggie treats. My vote will go to Cosmo, the silently mourning wild-haired terrier from Beginners.