Five Tips For GOP Candidates On The Campaign Trail, Courtesy Of The 'Safe House' Junket 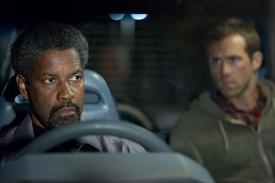 When GOP candidate Jon Huntsman declared one of his primary objectives is "to fix this country's trust deficit" under his future administration, he may have done so on instinct and observation. Or, maybe he'd seen Inside Job. Or, maybe he'd gotten an advance copy of Safe House and decided enough is enough. An amalgam of Bourne intrigue and Training Day grit, Safe House follows Matt Weston (Ryan Reynolds), an undervalued and overly optimistic CIA agent whose frantic course to prove his worth takes him through the underbelly of high-level government corruption and the shores and slums of South Africa in pursuit of one bad motha—I'll shut my mouth and reveal his name later. But it's safe to say you can't trust him.

That man, played by Denzel Washington, is an ex-intelligence officer and sadistic sociopath whose insider knowledge has been exploited at America's own peril. Granted, the Utah governor's forewarnings about the country's trust problem were dismissed early in the game (he's now "former" candidate Huntsman, after all), but for four other politicians, there's still a race to run. What might the remaining candidates learn from the politically cynical Safe House to their own advantage or at their own peril? Washington, Reynolds and their Swedish-born director Daniel Espinosa gave clues at the film's press conference.

1. An eye-catching name gets people talking.

Mitt and Newt certainly know this, especially when faced with the prospect of running against a Barack. So does Washington's character Tobin Frost, whose memorable name is repeated with varying degrees of volume and emotion as frequently as there are gun, knife and fist fights during Safe House's running time. Says Reynolds, he was attracted to play Weston, the low tier agent who squares off against the formidable and infamous Frost because, "I just love this idea that [Weston's] slowly disillusioned with everything that he believes in. It's the slow disintegration of God and country for him, and that's what means everything to this guy. And watching that be peeled away slowly, measure by measure by Tobin Frost. What we don't know is more terrifying than what we do know, and so much goes on behind the scenes that we will never, ever know about."

If a candidate's use of power reaches levels of abuse on par with Frost's, his moral ground may come into question. Espinosa acknowledges the influence of WikiLeaks on Safe House's narrative: "We had that tradition in Scandinavia. We like to reveal government secrets. We live in a world where we claim everything's open, and we know everything, and we know the truth, right? But we don't. We need to start understanding that just because we have ten different opinions of something happening in a certain area, that doesn't mean no one wants truth. That's the more serious undercurrent in this movie, but I'm not sure everyone's going to latch on to that."

Let's just say it's no picnic. On shooting scenes in which Frost by pressed for information by rogue intelligence officers, Washington recalls, "The waterboarding was close to real, and I really wanted to get into it to see what it felt like, and it doesn't feel good. You'll give up the answers."

"That was the most disturbing thing I've ever seen, watching him be waterboarded," adds Reynolds.

Michele Bachmann, Herman Cain and Rick Perry all denied in past debates that waterboarding is a form of torture, promised to reinstate it as a military ploy—and have since joined Huntsman in the "no-longer-running" column. Coincidence?

4. Stay in touch with the working class and bear in mind the "have-nots."

In contrast to the Occupy Movement and its staunch opposition to corporatism and lobbyists, Gingrich's claim that laws preventing child labor are "truly stupid," and Romney's "I'm not concerned about the very poor" gaffe sounded tone deaf to the needs of cash-strapped Americans. A sound strategy to prove they live on an equal playing field with 99-percenters could provide some much needed damage control. Shooting in South Africa, that kind of even keel was exactly what Espinosa was looking for. "When we were in Langa, the happiness and support and respect for our work, that impressed me," he says. "Normally when you shoot, people try to pass through the shooting and they say ‘I got a job, I gotta get to my job.' And you want to say, ‘I got a job too, man. This is my job.' But we were in Langa, when we were doing the shooting, we had about two thousand people standing and watching. When we were shooting, it would be silent. I look at what we would do, then after I would say 'Cut,' they would applaud, like we were doing a show for them. I appreciate that, because that was a respect for work. They understand we make a living, and I dug that. That was cool."

"When we went there, the people were incredibly happy given the horrendous circumstances they're living in," adds Reynolds, reminding himself not take our freedoms for granted, despite Safe House's skeptical tone. "When you're from the United States and you go over there, you can't believe what you're seeing."

Returning to South Africa after shooting Cry Freedom in 1987 during Apartheid, Washington observed that tensions remained amidst the country's socio-economic disparity and even offered a bold solution to include America's most tabloid famous 1% in a new kind of foreign policy.

Washington: "That still exists. But you can get DirecTV. You know what I'm saying?"

Reynolds: "You can get Everybody Loves Raymond."

Washington: "Yeah, that was the weirdest thing, seeing the Kardashians in Langa."

Washington: "We should send them over there!"

5. Whatever you do, pull no punches.

If Frost's villainy represents what we don't know, Newt and Mitt can't affords to be civil in their slugfest to demonize one another over whose government or corporate insider knowledge is more dangerous to Americans. Like Safe House's fight sequences, it's going to get ugly. "Ryan gave me a black eye," says Washington. "There's a scene where I reach over to try to choke him when I have the handcuffs on, and we were flying around in the car. He wasn't actually driving the car, it was being controlled by someone else. So it just happened, as I was reaching forward, he was flying back, and POW!"

An embarrassed Reynolds sighs, "I did. And that was my early retirement. I gave Denzel Washington a black eye, I should probably go home. But that first look you gave me after it happened, that was uh..."

Washington interrupts, "It was a real look."

"It was weird to see your face on fire," laughs Reynolds.

Straight-faced, Washington admits, "That was strange. I never had a black eye in my life, but can't say that anymore."

Reynolds decides to own it. "I'm glad I was your first. If it was gonna be anybody, it would be an apologetic Canadian."