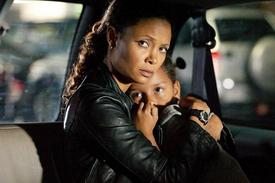 For a decade, Tyler Perry has cultivated a devoted audience and built an empire with himself at the center. But that empire was built on a foundation called "Madea," and though his fans flocks to theaters, critical success has long eluded him. With his latest effort, Good Deeds, Perry sets out to resolve that disconnect between popular adulation and artistic respect—and he may just have succeeded. Perry plays Wesley Deeds, a fabulously wealthy corporate honcho who, while engaged to Gabrielle Union, begins a friendship with Lindsey (Thandie Newton, Crash, Mission: Impossible II), a single mom and janitor for his company whose life has fallen into impoverished ruin. The plot is pure melodrama, but Good Deeds still manages to get across something true about being human: people are flawed and solutions aren't easy.

Thandie Newton's performance is a large part of why Good Deeds works. Her Lindsey is abrasive, cold and totally self-defeating—we've got enough reasons to write her off for good—but Newton plays her with enough nuance and humanity that we're on her side, even if we wish we could shake some sense into her. She anchors Tyler Perry's first real attempt to make a movie outside his comfort zone: there's no cartoonish right or wrong, just people fumbling through impossible decisions and tricky emotions. Thandie talked to Boxoffice to defend bad decisions, broken homes and glorify Good Deeds' insistence on playing uncensored Tupac.

How do you describe Lindsey? She's a tough lady to get to know.

Lindsey is a little, well, not controversial but she's made regrettable decisions. She is neglecting her child, though she doesn't want to. She is making her kid lie, making her sleep in a car—this is not great parenting. But I felt that Tyler knows I'm going to fill that with humanity, fill her with all the different shades, her pain and suffering, what she's been through.

I don't mean this in a pejorative sense, but Good Deeds is a very effective melodrama.

It is, isn't it? It's Cinderella, of course—most people in her position aren't going to get help from the CEO of a massive corporation. But it's a fable that allows people to question what they need in their lives. Help comes from unusual places, and we have to surrender and be open to what we might find. We have to try not to judge. One of the things that I liked is that it depicts how people leap to judgments very fast, and usually hard and fast. When Lindsey meets Wesley Deeds (Perry) she thinks he's uppity and repressed and has no understanding of the real world. He thinks she's an abusive mother, probably hits her child, is a potty mouth and disrespectful. The only reason why they continue to communicate is that they both love her kid.

He has a real sense of protectiveness, he didn't feel loved a child, and she loves her kid because her daughter is everything in her life. And I really do believe that children are the key to everything in our lives. I know it's a cliche—though not enough of one that we learn from it—that we're constantly trying to repress children, quiet children, when in fact they are little soothsayers, each one of them. Their grip on humanity, on honesty—it's extraordinary. As soon as we start to try to suffocate kids mentally, we are creating another generation of repressed, disconnected adults. And Wesley Deeds and Lindsey are perfect examples of that.

There's a scene when Lindsey's daughter is discovered by Wesley in the broom closet at work. He berates Lindsey, but she turns that back in his face and says he doesn't have any right to judge her life since he can't possibly understand it.

Yeah, because he's really presumptuous isn't he? He knows nothing about her situation—he can't even get his head around how poor and desperate she is.

Despite their flaws—Lindsey's bad choices, Wesley's blindness, his alcoholic brother, his spoiled fiancee—there are no cartoonish villains.

That's what I love: there are no stereotypes. The mother (America's mom, Phylicia Rashad) could have been a sort of wicked witch, and she's in many ways favoring her eldest son at the expense of her younger son. And Gabrielle Union's character isn't an instinctive mother and there's some shame around that her at first. But I don't feel like it's manipulative—the characters are shades of gray instead of black or white, and that's what makes it interesting. And it's a departure for Tyler, too. The truth is sometimes you do have to let people down in order to follow your heart.

Especially in movies when there's a love triangle and the potential of an affair, you don't usually see that kind of understanding that there isn't always a bad guy.

Divorce, let's face it, of course it can be tragic. But that's because society puts so much pressure on people to fulfill the "norm." The truth is families, extended families—and that includes divorced parents and friends—are probably the norm far more than the typical nuclear family. And if there wasn't this idea put on us by society of what marriage and family are supposed to be, everyone would be a lot less stressed-out, and there would be a lot less shame attached to broken homes, so to speak. I mean, who's to say that a home can't be any number of different things?

Like, "It takes a village"? We can't just expect one person to be every possible role we'd need in our lives.

Definitely. And we are all so different. But at the same time, I also think that we fall into the same trap of continually needing a new partner for every phase of our lives. It seems that means we're totally driven by ego, and have too much expectation placed on our partners to be everything when in fact we should really loosen up and be much more compassionate and accept that we're all flawed. We're all tempted, we're all self-destructive at different times. The real honor comes from supporting your partner through all their changes so that if they do something that doesn't appeal to us, or doesn't sit with our idea of who we want to be, we're not gonna just reject them.

This is the second time you've worked with Tyler Perry after For Colored Girls. How would you contrast the experiences?

For Colored Girls was a much more demanding role in a way, because I felt like a fish out of water; I was definitely playing an antagonistic, aggressive character. I didn't really spend that much time with Tyler, to be honest. I was preoccupied with the work and it was an intense experience—and it turned out great, we were all really proud of it. When he called me for this movie, I was kind of surprised. I guess because I'd gotten so involved in the prickly, difficult character I played in For Colored Girls and I didn't get to show another side of myself.

Did you feel that performance affected the way you worked with Tyler—that it wasn't the type of performance that would make him think you'd be right for the next role?

No it wasn't that, it's just that I hadn't worked with any of these people. I was playing a really nasty girl. And when you spend all the time acting like that and doing it very convincingly... And I'm quite shy. I tend not to communicate too much with my directors, except as the work demands. And when he contacted me about Good Deeds, I was just really thrilled and flattered because I knew it was about my performance, about my abilities as an actress. The fact too that he trusts me—and I think he also knows I'm a generous actor. I will work with everyone else in the cast, we all get the best out of each other.

I have to say: I enjoyed the fact that Tupac's "How Do You Want It?" played such a big part in Good Deeds.

[Laughs] I worked with Tupac, I don't know if you know that? [But of course: Gridlock'd with Tim Roth.] I was just thrilled that his music was going to be part of the movie. And I thought that's going to fit so well with the direction of these characters' lives. I also like the fact that it was played as is: uncensored. It even kept the n-word. That felt very satisfying in the midst of everything else.