close
OPINION: DVDS ARE DEAD. SO WHY DO WE KEEP BUYING THEM? 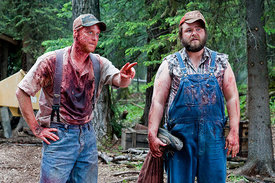 The horror-comedy Tucker and Dale vs. Evil, Alan Tudyk and Tyler Labine's genre-spoof about a pair of well-meaning hillbillies who keep accidentally terrorizing a group of white-bread college kids, will finally be available for rental via Redbox today. Like the film, there's little remarkable about that fact—except that the DVD has been available for purchase since November of last year. The huge gap between the sales and Redbox release dates of Tucker and Dale is an extreme case of a baldly desperate strategy employed by several major studios—among them, Disney, Fox, Universal, and Warner Brothers—to prop up falling DVD sales by extending the time between a film's availability for purchase and for rental. (Surely you'll pony up $25 to buy What's Your Number? because you can't wait a few weeks to see it... three months after not paying $9.75 to see it at the movie theater, right?) In the case of the first three studios mentioned above, the time gap between sales and rental availability is four weeks; for Warner, it might be as long as eight weeks.

For a brief few years in the late 2000s, DVDs were movie studios' largest source of revenue, with sales topping at $20 billion in 2006. But those numbers have steadily plummeted since. Although exact figures are hard to come by—studios tend to be secretive about their investments—finance and entertainment journalists have been ringing the death knell for the DVD in the last couple of years, based on the ever-decreasing numbers of units shipped, placing it beside the VHS, the LaserDisc, and Toshiba's HD DVD on the shelf of obsolete home entertainment technology.

But here's the relevant question: How are movie studios still making so much money—maybe as much as $17 billion in 2011, an estimate inflated by the higher cost of Blu-ray discs—through DVD sales? In the era of Netflix, iTunes, Redbox, and, ahem, The Pirate Bay, why would anyone buy a DVD? They're costly and fragile, add to clutter, and advertise your embarrassing Dark Shadows/Jason Statham/John Hughes obsession to your mean friends and potential significant others. (Yes, your John Hughes obsession is embarrassing.) So flummoxed were we for answers that we conducted a highly methodical and thoroughly scientific survey (we asked our friends) why they still buy DVDs (if they in fact do) and what was the last DVD they bought. To our surprise, our respondents came up with surprisingly diverse reasons, though, as expected, most admitted to spacing out their DVD purchases few and far between.

Here are their responses:

"I buy DVDs of weird movies that won't necessarily be available on demand or on Netflix. For example, foreign horror films or thrillers like Eyes Without a Face. The last DVD I bought for myself was over a year ago, and was the original Let the Right One In, because I wanted to see it before the story was tainted by press coverage of the American version. But this was like Summer 2010. It's been awhile since I expanded my approximately 14-DVD collection."

"I still buy DVDs (and now Blu-rays) because I actually care about additional features not made available on streaming releases. Also, I understand that if it's something I really, really like, online rentals and streaming don't convince studios there's still an audience for the thing like DVD purchases do (Firefly—DVD sales are the only reason the movie got made). Finally, HD streaming sucks up bandwidth like crazy. Seriously, my ISP sucks, and I'm paying for what is supposed to be the premium service. Blu-ray is still superior to streaming for this very reason, unless you're rich enough or live in a well-wired area that isn't being stabbed in the wallet by the local ISP."

"I don't buy DVDs, unless I absolutely love the film enough to watch it multiple times. This rarely happens. The only DVD I own is Pan's Labyrinth."

"I buy DVDs because they are MINE. I own them. A product in my hand. If my computer crashes, or I can't afford to pay my Internet bill, I still have my movies. The risk of someone stealing them is a lot lower than the average computer crashing. They can be traded, given away, or passed around.

"At least once a month I will buy a new DVD, usually on the day the movie is released and it's only $15 bucks instead of a week later, when its $20 or $25. That's a ridiculous price for movies, even for Blu-rays, the "hot new thing" that isn't anything. But I prefer to buy when the DVDs go on special for $5 to $10. This past Christmas I spent about $100 on $5 and $10 movies. They were great presents and most were blockbusters like Iron Man, Thor, and Green Lantern."

"I don't really buy DVDs. The last time I bought a DVD was two Christmases ago when I purchased The Decalogue for my cousin because he loves Kieślowski and for some unknown reason had never seen The Decalogue series. This might be the only DVD I've bought in the last 10 years."

"I buy DVDs because I like physical objects. I buy them for myself, my mother, or my friends who really should watch/rewatch something. The last DVD I bought was Norwegian Wood because I fell asleep during the movie."

"I've been forced to buy DVDs lately as research for my novels only because the ones I want are not offered through Netflix streaming or as part of my Amazon Prime membership. I also happen to live with one of those old-school freaks who believe the quality is that much better. He even makes me buy Blu-rays. My myopic, Generation-Y eyes don't see the difference. For Valentine's Day, I ordered the second season of Voltron for my said old-school freak because it comes in a collectors' yellow lion tin."

"I'll buy a DVD under two circumstances: when the movie's in the pantheon of my personal favorites, or when it's so terrible it's wonderful. I think the last DVD I bought was Secret Admirer (solidly in the second category): a schmaltzy and implausible 1985 high school romance that my college roommate fortuitously stumbled across many years ago. Its horrendous dialogue, clumsy acting, and needlessly filthy language (also, crazy triangular purses!) became classic fare for that punchy stage of an all-nighter during finals."

"I only buy a DVD when I absolutely love a movie, want to watch it multiple times, and really want my friends to see it too. This doesn't happen often. I bought Shortbus in 2008, and that is the last time I can remember buying a DVD."

"I haven't bought a DVD in ages. The last ones I can remember buying were the original Star Wars trilogy. Netflix and iTunes have made physical media irrelevant for me. Why own something that I will likely only want to use once?"

"I buy DVDs if I really love a movie or TV show and want to watch it over and over again. DVDs are also great for watching television series from premium channels like HBO, since HBO doesn't have any of their programs on Netflix, Hulu or Amazon Prime Instant video. So I bought Rome and Game of Thrones so I can watch them over and over when I want to."

"I have never bought a DVD and I don't think I ever will. Buying DVDs is waste of money because recently released DVDs costs as much as $20 versus free online. I'm not actually encouraging people to infringe on copyright laws, but the Internet is the reason that most people I know do not buy or rent DVDs anymore. There are too many other cheaper alternatives (Hulu, Netflix, YouTube)."

Take note, studios! We're not buying your dumb old DVDs because they're ridiculously expensive single-serving products, except when you tempt us with nostalgia, or special features, or charming box art, or, you know, movies we actually like. Make more of those, please.