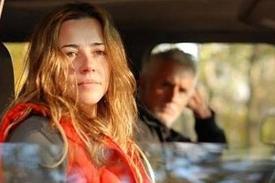 The plight of the returning soldier is a recurring theme that goes back to ancient Greece and the works of Xenophon. But as wars have always been destructive—often far away and long lasting—in modern times, they've also significantly changed. Reliance on an all-volunteer military has skewed the age of combatants from a mix of grizzled vets and 18-year-old innocents into a middle range where most people are concentrating on starting a family and building a career. And the increasing presence of women on the front lines will soon forever alter our concept of the veteran, starting with Return. Directed by Liza Johnson and starring Freaks and Geeks alum Linda Cardellini, Return aims to tell the story of this new type of returning soldier: mature and female. Cardellini plays Kelli, a member of the National Guard who returns home from a lengthy deployment in the Middle East (whether it's Afghanistan or Iraq is never stated) to find that her prewar life with her husband (Oscar nom Michael Shannon) no longer makes sense. As her personal life falls into disarray, she begins flirting with increasingly bad decisions borne of desperation and an inability to connect to her friends and family. Cardellini's understated performance is touching and, for anyone who has known a veteran, beautifully accurate. She tells Boxoffice how she prepared for the role, and why good people make bad choices.

Your character and her husband are shown to make terrible decisions and often behave badly, but they're never villains. It makes it rough to see how their marriage unravels.

What I liked, what felt complex to me, particularly in the relationship between my character and her husband, is that his infidelity is something she discovers, not something she knows. And it's almost never confirmed—maybe he did do that, maybe he didn't. What we see is her perspective at all times. Maybe he didn't follow through while she was gone, but did so when she returned and she wasn't the same person she was before she left. She tries so hard throughout the movie to put things back they way they were before she left. Listening to people's stories, I think that's a common experience for veterans. You've changed and you know you're coming from a place now that most people can't understand, but you're hoping you can reset because you miss the way you used to be so much. And everybody wants that for you, too, and there's some tragedy to the fact that it just can't happen.

I have a family member in the reserves who was himself called up and deployed. When he came home, we saw in him a lot of what you get across in Return.

That's a great compliment because, though it's not a true story, we were looking for a true thread of what people are going through and have been going through for years. It was delicate process and what I found really interesting is that there are no answers laid out for you. When I first saw the script, I was particularly moved by that. I feel like most movies tend to hit you over the head with immoralities and this movie lets you discover them on your own.

This is particularly true during your scene with John Slattery's character, when it takes the audience a bit to realize what that she's actually up to something very terrible and surprising. SPOILER WARNING! She's trying to get pregnant so she can delay her redeployment, even if it's by another man.

I thought it was someone very desperate for an answer to a question she can't define. All she wants is save her family, stay with her children and not have to return back into deployment. She becomes so desperate and does things that most people would see as incredibly irresponsible but she's terrified. I really liked how you didn't know that was what is happening until after it's over and then it becomes a pattern for her. As an actress, it's interesting to play a character in that position: someone making the wrong decisions based on what they think is the right thing to do.

At what point in production did you come into the role?

Early on. I think Michael was the first person that Liza [Johnson, the director] cast. I met with her in New York about a year or so before it began to get made. It was so independent we were waiting that long for financing. It was hard. When you're involved in a film like this that really is being made independently, you wonder if it will ever get made. Liza and I began this relationship, this open dialogue, and I became obsessed about the movie. Even though it was a pain in the butt having to wait so long to get it made, what was fortunate—for us, I mean—is that it seemed to be so relevant every step of the way. "Now is the right time for the movie," "Now is the right time for the movie." It's really interesting that it comes out now, after the troops are being brought home from Iraq, and more will be coming soon. It seems so interesting that after this big event, that the film is coming out just as so many veterans will be facing the challenges we tried to get across in this movie.

We also used that year until we got our financing to do all kinds of research. That was really vital for me playing this character. There's so many silences for her, and to be able to fill them with things that I'd been told about the reality over there, things that I can only imagine...

Can you talk a little about the research you did for the role?

We tried to speak with anybody we could. We spoke with soldiers who were training, soldiers who were being redeployed, I spoke with one girl who had come back and was at the VA—she was having some problems and being treated for PTSD, and I'm happy to say she's doing great now. People do recover, people do heal, which is something that was nice to learn and see. The portrayal can be so bleak and I think it is awfully difficult, but I was happy to learn that it does happen.

We also spoke with documentary filmmakers, we spoke with psychologists. We spoke to one psychologist in particular who donated her time. She came out of retirement to counsel returning soldiers and was able to provide some insight into the common threads between different soldiers' stories. One thing we found out that was very interesting, especially as it affected the film, is that there doesn't have to be one specific trauma. Simply living in a violent war zone can actually be trauma enough. You can be changed by the atmosphere that you're in—it doesn't have to be having someone die in your arms, just experiencing day to day life in a dangerous environment can actually cause PTSD. Really, after going through all of that stuff, how could someone not be affected?

The film has that recurring phrase, every time someone asks your character how she's doing or if there's anything she wants to talk about, she says, "Well, I'm doing better than a lot of people." She just repeats it like a mantra, but never really explains what she means by it.

Yeah, and things can always be worse. One thing I found really interesting when I was speaking to soldiers, men and women, is that there's sort of an inability for the person at home to understand because it is so dramatically different from our life here in the States. They want so badly to connect with someone, and I think my character feels so alone, and at the same time its nearly impossible to communicate where these feelings are coming from and what you've been through. They question whether that's even valid. When I was talking to veterans, a lot of them told me that they didn't think people would even want to hear-that their friends and families were concerned about them, but that they didn't think they could handle hearing them speak about what they'd seen or done.

Your character's friends are trying to reach out and talk to her, but aren't really sure how to approach the issue and it seems like they're overcompensating for their discomfort. Did you feel anything like that when you were starting your research and trying to talk to soldiers?

I felt like, "I'm only an actor, I'm only researching a part." I mean, I didn't want to pick apart their lives as if it was just a story to be told, I also wanted to respect it. And also, I think that being a person in the United States who hasn't served, you don't know anything about military life. And the small percentage of people who sacrificed so much of their lives to do that, go over there and basically provide a certain way of life for the rest of us, it's something that we think about and it's something that we see on the news, but it's not an every day experience for us.

And to return to something mundane, as your character does. She realizes she no longer cares about her civilian job.

I think overall, there's the feeling that they're doing something meaningful. And to come back to do something not quite so meaningful, the job has such low stakes, I think it's hard to be in that situation. There are echos of that in the people I spoke to. No exaggeration, I'm in awe of the bravery and the courage that they have, and the huge sacrifice they have to make is amazing. The rest of us, we go on with our lives, we don't sacrifice quite as much. Some of them have families waiting for them, some of them return and don't have that support, and I felt a great responsibility to try and be as honest and truthful about that experience as I could be. But I could never expect to bear the responsibility they have, which was humbling.