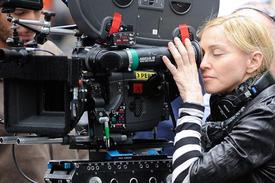 This week sees the American premiere of W.E., Madonna's film about the love affair between Wallis Simpson (Andrea Riseborough), an ambitious American socialite, and Prince Edward VIII of England (James D'Arcy), who abdicates the throne to be with his beloved. Not surprisingly, the turn-of-the-century British public pillories the already twice-married Simpson for shacking up with the one member of the royal family not obsessed with corgis, but at least seven decades later she'll win the rapt admiration of WALL-E Wally (Abbie Cornish), a contemporary New York woman trapped in a loveless marriage. The awkwardly titled—and impossible to Google—film is Madonna's second historical biopic after Evita (1996). Between the two, Madonna also attempted for years to produce and star in a film about Frida Kahlo, but studios wisely decided to go with Salma Hayek instead. W.E. has received heaps of praise for its costumes, but not for much else. Since the film appears to be an utter disaster (Time calls it "a botched episode of Masterpiece Theater crossed with a lethargic indie angst-othon"), we've decided to help Madge out by offering her six more strong women who deserve to be her next film biopic:

Malinche - As a longtime lover of Latins, Madonna can contribute to modern understandings of the complicated but unknowable relationship between Malinche, an indigenous Nahuatl slave who served as the Spanish conquistadors' translator, and Hernán Cortés, the invader-turned-first governor of New Spain. In the historical romantic comedy I Came, I Saw, I Loved, Malinche (Lourdes Ciccone Leon) and Cortes (Zac Efron) meet cute when she is sold to the Spanish explorers by an enemy tribe. The would-be lovers are immediately drawn to one another, but are kept apart by circumstances beyond their control: she doesn't speak Spanish, and he smells unbelievably bad. Over time, however, Cortes teaches Malinche to speak his language, making her the lynchpin of his Conquest of the New World, while she teaches him that bathing more than twice a year won't make him vulnerable to demonic possession.

Esther - Madonna should waste no time in bringing to the big screen the epic story of Esther, the crypto-Jewish queen of Persia who saves her people from doom and would later become Madge's own namesake/sign of her midlife crisis when she embraced Kabbalah and red-bracelet magic. In the royalty-themed musical Jews Are Cool, Esther (a brunette Gwyneth Paltrow) rises from obscurity to nobility when Persian king Xerxes (Clive Owen) handpicks the young dancer to be his wife. From her trash-talking bubby (Betty White), Esther learns that the royal vizier plots to kill all the Jews in the kingdom. She cannot confess to her husband that she, too, is a Jew, so the dancing queen smuggles a crew of super-hot Jewish ladies (the Challah-Back Girls) into a hidden dance studio/VIP room in the castle and teaches them a martial art disguised as a harem dance with which to seduce and kill the vizier. And that's how krav maga was invented.

Marlene Dietrich - Madonna has borrowed Marlene Dietrich's androgynous look throughout her career, and never more so than when she wore a top hat and suit and locked lips with Britney at the VMAs—an unmistakable reference to one of Dietrich's most enduring scenes. Her showbiz noir Shoot the Piano Player, starring Evan Rachel Wood as the pencil-browed actress, tells the story of the bisexual seductress as an ambitious young woman in 1930s Germany. But when she finds success in the cabaret scene, Marlene is tormented by a tackily dressed and insanely jealous accompanist named Elçon Jean (Kevin Smith) who spreads false rumors about her. In the thrilling climax, a bitter argument between Marlene and Elçon escalates into a brawl, and Marlene is forced to defend herself by shooting Jean. As he lays dying, she flips him over on his chest and scribbles on his back with red lipstick: "LIPSYNC THIS."

Imelda Marcos - Strangely for a self-made woman who forged herself into one of the richest entertainers in the world, Madonna seems rather fascinated by the glamorous wives/helpers/enablers of powerful men, such as Prince Edward VIII, Juan Peron, and even Diego Rivera, who enjoyed international renown while his much younger wife, Frida Kahlo, was still a novice painter. The inspirational biopic The Rose of Manila follows the teenage Imelda (Vanessa Minnillo) from her teenage pageant days in the 1940s through her long journey to First Ladydom of the Philippines in the 1960s. With her beauty queen face and charm school graces, Imelda becomes a key part of her husband's campaign for the presidency, freely giving away hope to the little people through glimpses of her beautiful smiles, shoes, and sailboats. She also founds a school for poor children called Manila Rising, where she and her staff—mostly her staff—instruct the children in the skills that have helped Imelda achieve such smashing success: blushing on cue, sleeping upright in full-pageant make-up and hair, and knowing which French couturiers are worth paying attention to this season.

Indira Gandhi - Madonna can tackle the private life of Indira Gandhi (Frieda Pinto)—the first female Prime Minister of India—with Gandhi Smash, a romance set against a high-stakes political backdrop that begins with the assassination of Indira's father, Jawaharlal Nehru, a close friend of Mahatma Gandhi and the first Prime Minister of India, when she is 17. Traumatized by the sudden death of her father and the abrupt collapse of the DIY Nehru Collar Company, Indira plunges into politics to avenge her father's murder. Nationally, she wins widespread adoration for her socialist policies. Internationally, she's applauded for her colorful saris. Indira ascends to the upper ranks of the Indian Parliament quickly and ruthlessly, earning her the title of "Gandhi Smash." But Indira only finds true happiness when the married Prime Minister embarks on a physical, spiritual, and political relationship with her personal yogi-turned-Rock Me Rasputin, Dhirendra Brahmart (Devendra Banhart).

Josephine Baker - Madonna can return to the best phase of her career by channeling sexual transgression (read: bisexuality and S&M-lite) with Singer Dancer Mother Spy. In this glitzy drama about the life and loves of Josephine Baker, Kerry Washington plays the chanteuse and part-time French Resistance spy. The film follows her through a series of dalliances, including ones with Ernest Hemingway, Pablo Picasso, Colette, and Frida Kahlo. Despite being a superlatively creative entertainer, and an international sensation, and a really good mother to her many kids, and an author of FIVE children's books, she is CONSTANTLY maligned in the press for her affair with one DEEPLY stupid young man (one of the Jonas brothers, doesn't matter which), just because he's 28 years younger than me and threw a VERY PUBLIC tantrum that one time about wanting to be taken to the Twilight premiere, and even though I TOTALLY helped him with his modeling career and freaking SEAN PENN was better in bed than THAT guy, he won't stop calling me, GODDAMMIT! Wait, this movie is supposed to be about Josephine Baker. Hell, just throw a lot of sequins on the costumes and no one will notice the rest of the flick.