close
INTERVIEW: Confidential to the Oscars producers: You could have singing Muppets!

Bret McKenzie On How The 2012 Oscars (Probably) Won't Have Musical Performances. 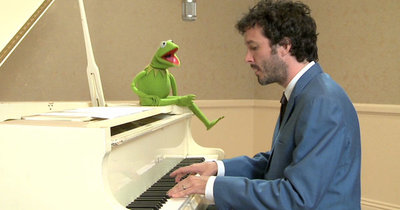 By now you've surely heard the bizarre news, first reported by Deadline a few hours ago, that the 2012 Oscars will be entirely music free, at least as far as the two - yes, only two - nominees for Best Original Song are concerned. It seems sometime last night, the producers of this year's telecast decided to axe live performances by nominees Sergio Mendes ("Real in Rio" from Rio) and Bret McKenzie ("Man or Muppet?" from The Muppets).

What the hell were they thinking? Mendes' song isn't great, but a lavish, Rio-themed performance seems tailor-made for the Oscars. And McKenzie's "Man or Muppet" is not only an instant classic, it practically begs for a live performance involving actual Muppets. It makes sense then that the reaction has been the collective voice of those who care about this thing shouting WTF, just as they've been doing ever since this year's exceptionally tiny number of nominees for Best Original Song was announced*. That reaction seems to have been unexpected, which might be why the 2012 Oscars producers have been quietly, and anonymously, walking things back a bit. While they haven't issued an official statement yet, an anonymous representative did reach out to Deadline on their behalf to spin things more favorably. "The show is not locked yet," the source said. "Decisions about this and other things continue to be evaluated by the team trying to produce the most entertaining 3 hours possible."

Yes, we all know this is probably not true, and that if songs make it into the final telecast it was the result of a policy reversal. But at least it's obvious that this is a PR headache the Oscar team doesn't want. We all know that the Oscars is more of an advertisement for the film industry than a celebration of artistic excellence. It's spectacle and gossip, formal ball and prom all rolled into one. It is, in other words, great television, just like the Superbowl. And like in the Superbowl, normally you need the musical performances just to mix things up. But when your nominees include a musical living legend and one half of the most beloved comedy duo of our time, failing to grab additional viewers by flaunting their talent is nuts. NVTS nuts. Stop dithering guys. Give us our singing Muppets, ok?

Serendipitously, this news broke this morning just as I was about to begin an interview with Bret McKenzie about his Oscar nomination. The full transcript of that interview will be up later this week, but it's worth noting now that I got to ask him about the axed performances, and his vision for how his would have gone. First confirming that he was informed of the decision last night, he was careful to make it clear he has "no hard feelings for the Academy", and is happy to have been nominated, but that he considers the missed opportunity a disappointment. That he intended to perform with Jason Segal and a host of Muppets makes the decision to cut the performances a little insane. You can read the whole thing on Friday.

The official video for "Man or Muppet?"

*The category's arcane rules exclude many worthy songs, and the arbitrary scoring system and qualification threshold seems designed to ensure as little nominated music as possible. This year finally saw the worst case scenario as somehow, despite a plethora of great original film songs in 2011, the selecting members of the Academy only liked two of them enough to qualify for nomination.