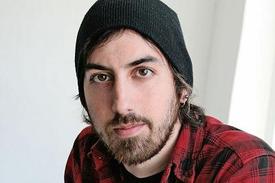 Ti West's micro-budget horror films have landed the indie auteur on many critics' directors-to-watch lists. His tense thrillers House of the Devil and The Roost showed that horror films don't need expensive special effects to be scary—a smart script and clever filming tricks can go a long way. In his latest film, The Innkeepers, West explores a haunted hotel in a small New England town, and he set it in the real Yankee Pedlar hotel, where he had his own spooky experiences. Boxoffice recently chatted with West about making horror movies on the cheap, the unexplained phenomena of the Yankee Pedlar, and his bet for the next hip monster.

When did you start coming up with the idea of making a haunted hotel film?

I was making this film called the House of the Devil and we lived at this hotel because it was a cheap place to keep the crew. So while we were making this satanic movie in the middle of nowhere, all this stuff was happening back at the hotel and everyone kept thinking that the place was haunted. There were all these weird stories accumulating. So a year and a half later, when I wanted to make a ghost story, I realized, well, we kind of lived one. What if I just wrote that and we went back to the actual place and made it there? That would be kind of a fascinating experiment. Then it happened.

What do you mean, you "kind of lived" it?

I don't believe in ghosts, but I think it was as close as I have ever come being at the Yankee Pedlar.

There was a guy at the front desk who believes it's haunted—he's even got a website. Doors open and close all the time, lights turn off and on, your phone will ring and no one is on the other line. When we made The Innkeepers, the room that we picked to be the most haunted of all was only picked because it was at the end of the hall and it was big enough to do a dolly shot. Then when we wrapped, I found out that it was the most haunted room in real life, too.

What made it the most haunted?

Anyone stays in that room would call down to the desk saying that weird things were happening. I didn't know that, but I thought it just looked good. We even had a spiritual reading there, too.

Wait, wait, wait. You've got to tell me about that.

When we made House of the Devil, Dee Wallace, who was in the film, is one of the nicest ladies ever—so I get very cautious about talking about this. But she's also a spiritual healer. I didn't know that. When I met her, I was like, "It's great to have you here, this hotel is a trip. People say it's haunted, but I don't really know," and she was like, "It is." Then she took out all these crystal pendulums and started doing her thing. I was so taken aback, but it was fascinating. And it was potentially, oddly accurate. I have no doubt that she believed it 100 percent. She gave everybody readings. So the character that Kelly McGillis plays in the movie [spiritualist Leanne Reese-Jones], I get cautious saying she was based on her, because she is a wonderful person. Kelly's character is a bit of an asshole, which is totally different from Dee. But that's where we thought up the idea of this celebrity who does this thing. The only difference was when I got excited about Dee doing this, she didn't make me feel like a jerk. She was really nice.

What did she find during the reading?

It's this long weirdly personal story about this relationship thing that I had. I totally didn't want to believe, but it was so right on. It was like that magician thing where you want to call the bluff, but I don't believe that Dee was faking it and I have no desire to want to believe it. I don't believe in ghosts because I need to see a ghost. When a door opens or whatever, I don't immediately jump to ghosts. There are a lot of layers before you get to ghosts.

As a skeptic, how do you make a movie that will convince skeptics to be scared?

As a skeptic, I think it would be awesome if ghosts were real, so I'm interested in finding out. This movie was important for me to have two ways of looking at it: the skeptic way and the believer way. You could look at it as though Claire [Sara Paxton] is having an existential crisis and she latches on to this ghost-hunting thing because its something that she think will make her feel valuable. And she gets in over her head and the more her paranoia gets her scared, the worse decisions she makes. Or you could look at it as though everything Kelly says is accurate and there is this plan that the universe has for everyone.

How did you get Kelly McGillis involved?

What actresses turned it down?

I don't want to get into that or throw anyone under the bus. Our producer worked with Kelly once and suggested her but I was like, "She'll never do this." Then I Skyped her, and when I got on Skype she was smoking a cigarette, and I tried to delicately explain the character to her, and she literally blew the smoke in the face of the Skype, and said, "I don't give a shit about that." She was not sensitive to it and she had a sense of humor about it, which made her the perfect fit.

Earlier, you mentioned that you wanted to make a ghost story-why did you want that?

I've made five horror stories in six years and I was about to make another one and I hadn't done a ghost story yet. Within the genre that I've been lucky enough to get some movies made, I'm trying desperately not to repeat myself.

It's got to be hard to work within the canon of horror movies. There are only a finite number of things you can do.

My next movie is a sci-fi movie. I've written a werewolf story.

But still, we've seen them all: the vampire thing, the werewolf thing and the zombie thing. So what is the next monster that will be "in?"

I hope sci-fi will be it. I think that found footage is what everybody wants. It's a weird time for music and movies right now. One person makes a hit and everyone tries to copy it. Those Paranormal Activity movies can't be stopped. Everyone wants to make a $100,000 movie that makes $100 million.

It's got to be hard making an indie movie, but not making it look cheap. What techniques do you use to keep a low budget film looking professional?

If you don't feel confident, then you just can't do it.

Could you lay out the anatomy of a scary scene? What are the essential elements?

It's like telling a joke. One person can tell a joke and it works, and another will tell a joke and it's not funny. In this movie, there's enough non-horror that when the horror happens it makes a bigger impact. Playing with expectations, making it relatable. It's also that classic Hitchcock thing where you show the audience something the characters don't know and you make them wait to see how it plays out. You know something is coming, but you don't know how. For me, though, if you care about a character, then you get scared when something is going to happen to them.