'The Innkeepers' Star Sara Paxton: I Would Love To Play Carrie 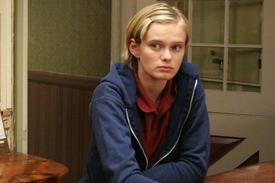 Haunted hotels get a reboot in the indie thriller The Innkeepers. Sara Paxton plays Claire, a listless twenty-something desk clerk who teams up with her co-worker Luke (Pat Healy) to find ghosts in their spooky New England inn, the Yankee Pedlar. Though things get truly scary, Paxton's wide-eyed, girl-next-door, disarming sense of humor has a way of defusing tension between ghostvattacks, kind of like the way she charmed audiences in Shark Night even while her friends were getting chewed up by fish. Boxoffice met up with Paxton at the Beverly Hills' posh SLS hotel—a sweet suite that's probably never seen a haunting, although Paxton's manager lurked nearby to offer casting advice.

That's a fancy chair you're sitting in.

I know! Hey, do I look like Doctor Evil in this chair? [She swings around making a sinister face]

Kinda, I guess. That's more of a Medusa face. Speaking of being scared, is it hard to act in horror films as opposed to other movies?

It's really physical and tiring. It's a lot of running, yelling, and more running up and down stairs. But you're really in this scary place, so you can act scared because you really are scared.

So this movie, it seems like you're playing yourself. How did you do research for that role?

Yeah, the characters in the movie were so relatable that I really saw myself in Claire's character. I could imagine myself getting into those situations, then I would just think how I would react.

Horror films are all about having a great scream. Any favorite screamers out there?

Hmm, I'm not really sure.

Not even The Shining?

Oh man, I'm too scared to even go back and watch that one again. But I do really love The Exorcist. That totally freaked me out—I mean, I'm Jewish and I still keep a rosary by my bed, just in case. That whole "Spirit of Christ compels you" thing [she says sassily with one finger raised] seriously freaked me out.

Um, you kind of sounded like an elderly black woman there.

I know, I know. Sorry, that was like Tyler Perry's Exorcist. Madea would be the main character.

Eddie Murphy could play all the other characters, maybe even the floating bed? Is that too much? Anyway, so no favorite screamers at all?

The funny thing is, that I can't really scream. I remember talking to them and letting them know that I can't scream at all, it only sounds like this:

"Scarrrgggth!" [kind of like that gurgly voice you make when you first wake up, or have lost your voice]

If you could go back in time and be in any horror movie, who would you like to play?

I'd love to be Carrie. Wouldn't that be great?

[Her manager, sitting on the floor by the door, jumps in: "Yeah, that'd be great, I heard they're making a remake soon, too. You should try for it."]

This is a really, really indie film, what was the shoot like?

We all lived there at the hotel, the Yankee Pedlar. We ate there, we slept there. We did everything there, and at night we'd just go to the hotel's bar with the crew. It was kind of like a frat house.

Was Kelly McGillis staying at the hotel with you guys?

Yeah. I was totally nervous at first meeting her, I mean, she's the Top Gun lady. She's totally on the cover of my Top Gun DVD. She actually arrived on the second week of shooting, so all of us staying there, we were already in the shit, you know. We were all super-close, so it was kind of nice to have that distance from her—it actually helped.

So you never went into the small town around the hotel, not even to go to Bed, Bath, and Beyond, or whatever lame stores that were there?

There wasn't even a Bed, Bath and Beyond in the town. In fact, it would actually be nicer. The Yankee Pedlar was the highlight of the town, if that means anything.