The Stars of 'Chronicle' Reveal Their Dream Superpowers 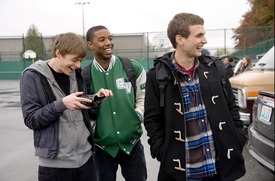 In Chronicle, three high school kids find themselves blessed—and cursed—with fantastic super powers. Two of them, Matt (Alex Russell) and Steve (Michael B. Jordan) are already cool. But the third, Andrew (Dane DeHaan) is an angry geek who first uses his gifts to get popular, and then everything goes wrong. What makes them destroys them, a fitting metaphor for the perils of fame, if these three young actors think about it. We sat down with guys to find out for ourselves if they can handle it if Chronicle is a hit, and in the process compared their performing art school upbringings with this flick's normal teenage take on senior year, and most importantly, asked them super powers they'd like to have. And we'll just say it now: Michael's makes him sound a lot like Mel Gibson.

In Chronicle, you all get the power of telekinesis and flight. If you had a real life chance to have superpowers, what would you pick?

Alex Russell: I'd actually pick telekinesis because you can fly with it—and that would be the power I would have picked before I knew that telekinesis also covered flight. It's like a two for one.

Michael B. Jordan: [Laughs] It's like whoever gets to answer the question first gets the good answer, everybody else has to dial it in.

Dane DeHaan: I would pick time travel. But I don't know if that counts as a super power.

It's pretty super. Do you want to change the past or just hang out with historical hotties or something?

Dane: I just want to be able to go any place in time that I want to go. I'd really just want to hang out with people, kind of Midnight In Paris style.

That'd be the weirdest use of a super power ever: travel back in time and have coffee with Hemingway. "I have the ability to converse!"

Michael: I'll go with the more practical answer and say I'd love to be able to read a woman's mind whenever I wanted to.

Alex: Anyone's mind, or a woman's?

Alex: Wouldn't you want to be able to read men's minds, too?

Michael: Being a man, I already know how a man thinks.

Michael: Save me a ton of money!

You guys are playing three teenage archetypes, but you've been acting for a while. Michael, you've had the lengthiest career—you've been acting since you were 13 in shows like The Wire. Did you even have a typical high school experience?

What does she teach?

Michael: She's a parent liason, kind of a guidance counselor.

Dane: I went to high school in Pennsylvania. I went to a performing arts high school my senior year, but I had a fairly normal high school experience—certainly not as depressing as Andrew Detmer's. I can definitely relate to a high school student who doesn't really know who he is or really how to express himself and is looking for outlets to do that. Which I think is who Andrew is at his core.

You both ended up at performing arts high schools, so you obviously knew early on you wanted to act. Did you have support from your parents?

Dane: I always knew that was what I wanted to do, I just didn't know I wanted to do it professionally until I went to school for it and learned how to do it. And my parents were always supportive, especially since it was all I wanted to do. I did a lot of school plays, I did community theater, I kind of exhausted all the local options which is why I enrolled in the performing arts school. I did that in college as well. I've been out of college for three years and that's when I started trying to act professionally. I did do a lot of theater work in New York, a fair amount of TV and then last year I did three films. I did one year of theater, one year of TV and then moved to on to film.

[Michael starts brushing off Dane's shoulders like he's Jay-Z and the three guys crack up.]