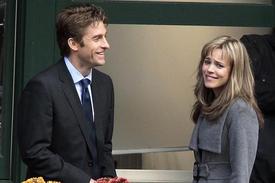 When Rachel McAdams loses all memory of her husband Channing Tatum after a car accident-induced head trauma and mentally reverts back to when she was in law school, the broken-hearted ex-fiance she dumped years before seizes his chance to win her back. The Vow sounds like a soap opera, but Scott Speedman makes his schmarmy scorned lover into a believable character—and even makes you pity a handsome and wealthy Chicago lawyer with fabulous hair. The Canadian actor, who got his start as a Felicity heartthrob, talks about what it's like always playing that guy when you're a supporting actor and how to prepare for a kiss with Rachel McAdams. Says Speedman, "Just get it done."

Is it harder to make a character likeable or reviled?

I think they're both hard. You're trying to manipulate. To try play an unlikable character, it's not in the writing. It's tough, but if it's in the writing and it's a three-dimensional character, I love that 'cause you can really play a total dick. I'd be really good at that—it would be fun. It has to be in the writing. If it's not there, I'm not going to invent it.

Your character is really schmarmy. Did you enjoy that?

Yeah—I usually have to play soft-spoken, nice guys, so it was nice to play a schmarmy guy.

So what are the specific things you do as an actor to make a character seem schmarmy?

I just tried to play a real guy, but I probably come off seeming like such a dick, which is good. You know if you just put a camera on me, you'll see me schmarmy, you'll see me be an asshole, you can see me be nice. It depends who you're with, you know—I'm ten different people.

Even though your character was schmarmy, I still felt a bit sorry for him.

Well I definitely didn't feel sorry for him, but that's good, that's good. My job is done, and I'm happy with that. I wasn't manipulating the circumstances for an audience to feel sorry for me, but I definitely playing that he was still in love with this girl and he wanted to get her back, which I think people can respond to.

I kept thinking that the movie could have been inverted, where your character could have been the lead, as he's getting a second chance to get back the love of his life.

Sometimes it depends what kind of supporting character you play. I was trying to play it like a lead, but he's obviously a supporting character. I was only in like four, maybe five scenes. I always try to play to the lead, so it helps the actual lead with their role—creating tension or something that helps their tension.

You're like the backing band in music: you don't want to take too much from the lead.

Well, you really want to be the lead. You look at the best supporting actor's categories because sometimes they steal the scene. You do want to come in and make your presence known. It's really the editing, too. If they felt that I was coming off too unlikable, they could probably edit it so that I seemed more likable-or vice versa. I gave them a lot of different stuff and they put it together.

What was the most surprising thing about meeting Rachel McAdams?

That she looks exactly how she does on film. Often, that's not the case. A lot of times actors are just well shot, with good makeup or whatever.

Yeah, and Channing, too, for that matter—they are very good looking people. I mean, they look like movie stars. She's a very beautiful girl.

As a supporting actor, do you get a lot of time with them or do you just show up, do your lines and leave?

Yeah, got to hang a little. I sort of try to push my weight around, trying to get to know them a little bit. Not Channing really, but her. It's hard to show up on that day and have history, so we met at a bar or something and hung out. We're both from Toronto [where the film was shot]. She lives there and I grew up there.

Did you have any weird run-ins with anyone you knew from high school.

When you prepare for your kiss, what kind of conversation did you have with Rachel McAdams about it?