'The Vow' Director Michael Sucsy On Keeping The Cheese Level Down 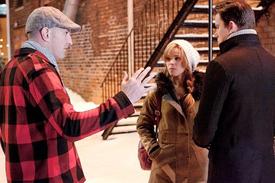 Imagine everything you know about your loved one is taken away in the blink of an eye. That's the premise behind The Vow, Michael Sucsy's take on the true story of a woman who gets in a car accident and completely forgets everything about her husband—and herself. Starring Rachel McAdams and Channing Tatum, it asks: can you love someone who, say, switched political parties overnight? Can they love the spouse they've never met? Sucsy came to the film from an Emmy and Golden Globe-winning TV movie that couldn't be more different: Grey Gardens, inspired by a 1975 documentary, in which Drew Barrymore and Jessica Lange played women who can't let go of the past. Boxoffice caught up with Sucsy to discuss the philosophical underpinnings of developing identity...and Sam Neill's fart machine.

Love stories are usually cheesy. What did you do to keep the cheese level down?

One of the tools that a director has to move emotions along is music. We budgeted for a really big orchestra, like a 20-person orchestra, which is typical. As we started to put in that kind of music—you know, when you're putting in a temp track before you write your own—it was not okay. It was a wet blanket on top of the movie. It wasn't that kind of movie. It didn't fit. It wasn't a cheap suit, but an oversized suit.

With big shoulder pads. It was a disconnect. So we started pulling back on the music and the quantity of music, the kind of music, the instruments. I was like, "No Strings!" Then we wanted to use more interesting instruments and more alternative stuff, and then we found the right rhythm. We could have done strings and that wouldn't have worked.

The music supervision was interesting, too: Lykke Li, The National, OK Go.

I didn't want to make a movie for one quadrant. I wanted to make a movie that older people could like, younger people could like. I wanted men to like it and women to like it. I think that when you're in a demographic for a movie like this, there's a temptation to put in super pop music—music that "girls are gonna love." But I really wanted to make a movie that endured and that you wanted to see again. In this one, we wanted to use music that feels contemporary and also more nostalgic. I could have made a poppier sound, but that would have made it feel more ephemeral. I spent too much of my time and heart to have something that just comes and goes.

This is your second film about a true story. What interests you in telling true stories?

There's that expression: "Truth is stranger than fiction." This is just inspired by events. There's a lot that was just extrapolated from the actual accident. It was important to include that this was inspired by a true story so that you don't write it off as just being Hollywood. You know that at least part of this story is based in fact. Even if you're setting up a sci-fi situation, emotionally and thematically it's tied into who we are and what we know. Otherwise, you can't relate. The "inspired by true events" helps to anchor the film.

And it gets the audiences to think, "What if I were in that situation?"

That's one of the reasons I did the film. After Grey Gardens, which was well received, I wanted to do something that was for a wider audience and more universal. I can't think of anything more universal than the notion that this could happen to anyone, at any time, in any relationship. You don't have to be married—this could happen to you and your best friend, you and your sister, you and your parents. There's Alzheimer's, but this idea that this could happen to you when you're young, how would you react to that? Audiences watch a film and we naturally put ourselves in the position of that character. The idea that you could do this with any character in this film, and substitute any character in for them. You rip all the experiences away from a person or a relationship, and what do you have left? You have this unrequited love, and how do you deal with that?

It's the John Locke thing: Are we the sum of our experiences or are we born with an innate identity, a soul or a persona that defines us?

It's both. We have an innate nature, and I feel that that innate nature comes out no matter what. Whether it comes out with our sexuality, or coming out as in Paige's case [McAdams' character] where she is an artist. She is pushed through her experiences to be in law school, which is something that she is intellectually capable of, but it's not part of her soul. So when her life is reverted, which path is she going to take? So that falls into fate and destiny and those kinds of things. At the same time, we are the sum of our experiences, but that doesn't meant that's all we are. I think that's one of the problems of this nature versus nurture argument, because it's a combination of both. I wouldn't be who I am if I didn't have the experiences and relationships that I have had.

They say that your nature, sets up the scaffolding of how you experience the world.

You see children who have a very defined nature. It's the Michelangelo thing—how he said he didn't carve the David, he released him from the marble. David already existed. And that's something that I dealt with growing up. I have wonderful parents, but I grew up in a pretty conservative environment, not that dissimilar from Paige. I was guided towards a more traditional career and education. I went to Georgetown and studied Foreign Service. Then I realized that I had this other side of me. When my parents were moving, I found a second grade journal, where I was writing about the class plays. I was fixated on it. There you have it: I wanted to perform and create a world.

I was terrified about one thing in the movie, the fact that maybe the person that you love really isn't the person that you love. That maybe Democrat girlfriend is really a Republican, or vice versa. Paige is divided into these two worlds: the creative and the practical worlds, the Conservative and Liberal worlds. Do you think there is any way that these worlds can exist together?

Yeah, that's part of Paige's journey to question whether that is personal. That's the key question. She says, "There isn't two me's, there's just me" and that's our journey in life. It doesn't matter whether someone is Republican or Democrat or whatever, the real problem is if you haven't questioned, "Is this the real me or is this just the me I've been told to be?" That's the saddest thing in the world for me. Some times you have to go all the way around the block to know you were in the right place in the beginning.

Did you ever make Sam Neil recite lines from Jurassic Park?

I will say I had the very immature instinct that I do not regret on any level of putting a fart machine under the dining room table during the scene where the family comes and visits the family. I had the button by the monitor and set it off, and everyone—Rachel, Channing, everyone—heard it. And Sam said, "Well, I believe it's coming from my end." He meant his end of the table, but it was a very unfortunate choice of words.