We Ask 'Wanderlust' Creators David Wain And Ken Marino: What's So Funny About Men's Genitals? (And Their Answers Are All Lies) 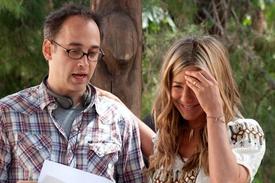 Ever threaten to leave all your worldly possessions behind and join a commune? In Wanderlust a couple of New Yorkers (Paul Rudd and Jennifer Aniston) ditch their West Village microloft—read: studio—to move to Atlanta. On the way, they get sidetracked at a commune and decide that life with a nudist wine-maker, a psychedelic yogi (Justin Theroux) and a gang of weirdos isn't so bad. Helmed by members of the comedy troupe The State and produced by Judd Apatow, Wanderlust is filled with freaks and geeks and gross-outs—in short, it's 100 percent the creation of its writer-director David Wain and co-writer/actor Ken Marino, both of The State, who also paired up to write Wet Hot American Summer and Role Models, but did not—not—write The Hangover (despite their claims to the contrary). We caught up with them to howl—literally—at Jennifer Aniston's shorts, ask what's so funny about men's genitals, and get lied to repeatedly.

So what's so funny about dicks?

David Wain: I think he's referring to Fort Dix. Everyone doesn't even go to the barracks except to sleep, that's how much partying goes on there. [Note: Wain constantly lies throughout the interview and almost dies laughing at his own jokes. Imagine him following every other statement with laughter and snorting]

Ken Marino: That unto itself is funny. And what are these guys even wearing, uniforms? [Note: Marino is continually breathless from laughing at Wain.]

Wain: Camouflage? It's like come on guys, make a choice!

No, I'm talking about dicks, like male genitalia. I mean, in a movie like this, there's dicks and farts. So which do you think is actually funnier?

Wain: In our case, there's only one minor fart joke in the movie, and there's a lot of dicks. And let me tell you. For every dick joke that's in the movie, there's four or five that were cut.

Wain: One of my favorite jokes that I like to make is to talk about an incident, then say, "Then I take out my dick," just to make it funnier.

So dicks are pretty funny.

Wain: They are just funny looking.

So how did you cast the dick for this movie? I believe it's a stunt cock, am I right?

Wain: It's a stunt cock. We looked at a lot of cocks. First, we did a lot of research. Ken and I drove around New York and L.A. just looking at a lot of cocks. Then when we honed in on the kind of cock we wanted to make, then we met with prosthetic artists to craft the cocks.

Wain: They just weren't as cocky.

Wain: It's also context. The cock has to fit correctly with the balls.

Marino: It's a balance.

The ideal cock to ball ratio is?

Wain: It's like if you have Daltry that's great, but without Townsend then what's Daltry? It's how they fit together—that's what makes The Who.

When did you start writing this?

Marino: We wrote this all out on a legal pad before you came in here.

Wain: We started writing this about five years ago. We locked ourselves in a room for a week without an idea, and came out with a draft. We've forced ourselves to do this before with The Ten [their 2007 surreal comedy starring Ryan Reynolds].

Marino: Then we spent the next four years completely changing it, but kept some of those seeds from those seven days.

What did you leave out of the movie that you had in the first draft?

Wain: There is a whole long section where George (Paul Rudd) goes down to Florida to meet his parents in a condo in a Boca Raton. Then hooks up with the maid from Bosnia at the parents place.

Did you have actors in mind when you were writing the movie?

KM: I remember when we wrote Kerri Kenney's part [as a devoutly feminist super-hater], we were writing with her voice in mind. We knew she would be funny doing it.

Wain: When we wrote The Hangover we weren't thinking of—

Marino: We weren't thinking of any of those. To the point that we didn't even write it.

So how did you get Jennifer Aniston involved?

Wain: We looked over her numbers and—

Marino: Really, we gave the script to Paul and Jennifer was on our dream list. We had never met her. So we had to go to her through Paul.

Wain: For the record, I have met her once.

Marino: We knew that she was a fan of Role Models and a friend of Paul's, so we went to her, she said she liked it, and she did it. It was that simple. So anybody out there: if you have a script, just give it to Jen, and I'm sure she'll say yes.

Wain: After three and a half years of working on the script, we really got Paul, then Jen, then Judd Apatow involved. And we were off and running.

Had you seen Jennifer in the original Leprechaun?

Because Jennifer's wardrobe in Wanderlust seems to be an homage to her days of jean short cutoffs.

Wain: She knows how to wear a pair of shorts.

Have you ever been to a nudist colony?

Wain: No, but I once went on a trip with two female friends to the Rainbow Gathering, which was a month-long summit in the middle of the woods. A bunch of people get together and wear no clothes and make rice on an open fire.

Marino: They make rice on an open fire?

Wain: Or beans, I don't know. It was like living off the land, it was a small and more hardcore version of Burning Man. I was very uncomfortable as a 21-year-old suburban kid. But I think that served as some inspiration.

Marino: How many boxes of rice do you think they make at Burning Man?

Wain: I don't know—like four or five boxes of rice? Some of it's Rice-A-Roni.

Marino: You've got to cut corners.

How much of the movie was improvised?

Wain: All of it. There was no script. It was basically like we had our cast and we'd just stand there, and roll the cameras and see what happens. It's amazing we had anything.

Marino: We actually shot the script, then we'd let the actors improvise on a take. So it's like 20 percent improv.

Wain: We tried to get what was on the page, but it was in the editing. We'd make the big choices later.

There's the scene where Paul Rudd is looking in the mirror yelling obscenities at himself—was that improv?

Wain: The meat of it was all Paul

Marino: It's about a half a page—maybe quarter of a page—written. We wrote so he could stand in front of the mirror and just go at it. Then he enhanced it and made it his own.

What did he make up and what was yours?

Marino: "Dickie Mart" was ours.

Wain: "Erection selection." Then the second half was him just saying, "I'ms gonna puts mah dick in all up in your vag." All of a sudden he's a Southern rapist of some kind. We're not sure what's going on with him.

Marino: The best is that he's frightening himself. He's so committed.

Wain: It's basically him looking in the mirror seeing what kind of faces he could make, which I think we can all relate to.

Did you write "I'm going to put my nuts on your balls"?

Marino, you play Paul Rudd's asshole Atlanta consumerist brother. What kind of research did you do for your role to be such a bastard?

Marino: That's about it.

His house looks like a McMansion with a TV in every room, even by the barbecue. Have you been to many McMansions?

Marino: There was a TV in the hall. I mean, who's watching that one?

Wain: And they're all tuned to horse racing, volleyball, dogs jumping over shit.

Marino: That's all the stock footage we could get.

Wain: We couldn't get any real footage.

I like the idea of a microloft. Do either of you live in one?

Wain: My wife and I live in a way too small apartment in the West Village, so that was the seed of that.

What advice do you have for young writers?

Wain: Stay out of it until we retire. No really. One thing that I learned doing The State was that quantity is an important as quality. You've got to keep doing it. Over and over. Don't be married to one thing you wrote and just keep going, because if you write a 100 sketches, the best ten of them are going to be better than if you only write ten sketches.

What are some of the shows that you were really passionate about that never got made?

Marino: We did a show called Theater Fags, which was a loving thing about kids in theater. Then a year later Glee came out.

Anything happening with Porcupine Racetrack?

Marino: It'd be a wonderful play.

Wain: Or a Nicolas Nickleby-length play.

Marino: It's a two-parter.

Wain: Michael Showalter and I wrote a script called They Came Together, right after Wet Hot American Summer. It never went anywhere, but now we did a reading of it and it went well, so we might try to make that sometime.

Any more plans with The State?

Wain: We are all friends, we all hang out together. We're always psyched to do something altogether, if and when schedules permit.

Any live performances of State stuff?

Marino: We recently did ten new sketches that spanned the history of America.

Why has The State stayed popular for almost 20 years after it began?

Wain: In college, we were a group of people who were pretty into ourselves and that cockiness kind of served throughout making the show. We weren't a sketch group that came out of Second City or UCB or Groundlings, or anything. We were just influenced by each other more than anything. Something about that alchemy or that outsider feeling resonated with people.

What was the first sketch you guys did together?

Wain: There was a sketch where I'm sitting in the park reading a newspaper and relaxing, and Ken is a hot dog vendor.

Marino: I'm like seven feet away from him, and there's no one else around

Wain: Wide open field with no one else there, but I keep getting hot dogs landing on my face, and I keep looking up and yelling at him for throwing hot dogs on my face. He keeps saying, "I'm not, I'm not!" Then we reveal that he's not lying, that there's this hot dog missile testing facility, where they keep putting hot dogs into a cannon and shooting them into the air, which happen to land on my face. Our production company is actually called A Hot Dog. It's really sweet.

Marino: And: a hot dog. A phallus. Now we're back to dicks.

Wain: We've talked so much about dick, but not enough about balls.

Marino: They're the unsung hero of genitalia.

Wain: They're always just right there.

Marino: They're just waiting in the shadows. The unhung heroes.

Did you just say unhung heroes?