'W.E.' Star Andrea Riseborough On Playing Royalty For The Queen Of Pop 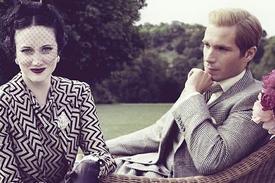 Andrea Riseborough looks like porcelyn, but has a backbone of steel. That's made her perfect casting for characters who are more complicated than they seem-even when she plays the ingenue, as she did in the retro noir Brighton Rock, she's still ready to commit suicide just to impress a man who she knows doesn't love her. And though critics have been divided on Madonna's W.E., they've universally bowed down before Riseborough's bold reinvention of Wallis Simpson as a joyful, fashionable socialite who realized too late she'd been trapped, sacrificed and demonized by King Edward's mad infatuation for her. Explains the 30-year-old Riseborough, born just in time for Madonnamania, while she was initially intimidated by 100 hours of fittings she underwent for her Oscar-nominated wardrobe, she barely blinked an eye at being directed by the Material Girl—her childhood idol was art house director Mike Leigh.

Growing up in England, what were the first impressions you had about Wallis Simpson and King Edward's abdication?

Stanley Baldwin [the former Prime Minister] had backed a fairly large propaganda campaign against Wallis Simpson, so the common man was not a fan. Before the abdication, there'd been an embargo on their relationship in the press, so the working man had not yet realized that she was on the scene. And then very cleverly, two weeks before the abdication when it seemed like he might abdicate, Stanley Baldwin dropped the embargo and there suddenly was a wealth of pictures of this American divorcee twice-over from Baltimore clad head-to-toe in couture—you can imagine it didn't look very good. Of course, the upper classes realized that their relationship had been going on for quite some time and that they were really, truly fond of each other. And the rest of the world was quite taken with their romance and their story, but within the majority of Britain, it didn't go down well. The history of that was really word-of-mouth in my grandparents' generation, and then for me she was this still image of a matronly, enigmatic figure who was monochrome and unmoving and peripheral-not anything that I had an emotional connection to, if you will.

What surprised you when you started learning more about her for the role?

I suppose one can't be surprised when one has no preconceptions of who a person might be in real life. I think we all very easily form personal attachments to people in the public eye and imagine that we have a connection to them when actually we don't. It's very human. I found out a huge deal about her researching her life-there was no leaf unturned-and it was a very fulfilling process.

The King's Speech portrayed Wallis as this manipulator who knew exactly what she was doing when she pursued Edward. By contrast, in W.E., it's Wallis who's manipulated into and pinned down by the romance.

She's absolutely trapped and she saw the writing on the wall from the outset. She knew that she would never be able to live up to the responsibilities of the kingdom—how can any person live up to that, man or woman? I think one would always feel lacking when compared to a kingdom. So she, in that sense, was a victim. I don't think she saw herself as a victim—I don't think that it was a characteristic trait that she would victimize herself on a regular basis—but I think she certainly found herself in an uncomfortable spot more than once in her life. And that was largely to do with the fact that at that time, you were attached to whichever man you married and sought to be the best possible wife. She was in a very unhappy first relationship and from that point on, there was Earnest [her second husband] who was wonderful and supportive, but perhaps didn't have the whirlwind romance that one might hope for. But she was very happy with Earnest. They were the best of friends and they really had a lot of respect for each other. And really, Edward wouldn't let go of Wallis.

You can really feel the guilt that kept her there, as Edward had given up so much to be with her.

I'm glad, I'm glad—that's really what we sought to portray.

And there's this idea of media attention, that she gave up being a private person when their relationship became news. I kept wondering how much worse the media would be today?

I think now, so much is reported on and anything can be on the Internet in five minutes, which means to even be noticed, one has to jump through 50 times as many hoops. I think during her time, there were perhaps only a handful of people in the world who were sensational and being reported on in that way. And she was one of them. So her every move was followed, just as it would be today, except that now there are 200 people whose every move is followed. It would have been hard for her, and I don't think it would be any worse today—just very similar.

The costumes of W.E. really stand out and they say so much about Wallis' character. At one point, she even says that even though she's no beauty, she knows how to dress so that everyone looked at her when she entered a room.

I certainly understand now how the architecture of couture can effect a room of people and their feelings toward you. I have a great deal of respect for—and more of an understanding of—what it is now. There were, I think, 70 costume changes—maybe more—and hour upon hour upon hour of fittings. I don't know how many fittings, but it was over 100 hours of them. Really, all of that was useful for me from my perspective because the constraint of the symmetrical, matronly garb that she always found herself in was invaluable in terms of how it affected my physicality—how it affected her physicality, more specifically. I wanted very much to exist as Wallis clothes or no, spirit and all. Finally putting the clothes of top of all of that was even more of an insight emotionally, physically and mentally.

What was it like to take direction from Madonna?

It was like answering to my director, which is my job. It was just like being in any other movie and I absolutely approached it that way with the same professionalism that I would in any situation when I'm on set. I answered to her. I very much enjoy being directed and I very much enjoy getting notes and getting to the root of something and trusting somebody who has the objective perspective of an emotional through-line in a narrative that spans many years. I trusted her implicitly.

Still, it's the rare director who you've known of since you were a kid as one of the biggest stars in the world.

Well, I've had an opinion from a very early age about Mike Leigh [the 68-year-old director of Secrets & Lies and Happy-Go-Lucky], who I never dreamed I'd work with, and the many incredible people I have worked with. If you revere someone and respect them a great deal, it's wonderful to actually meet them because it's naïve to think you have any real relationship with them before, like what we were talking about before with the Duchess.

But the difference is Mike Leigh wasn't a pop star you listened to on the radio.

But Mike Leigh was the Second Coming to me. Mike Leigh would make me quake at the knees at the thought of working with him because that's my bag, you know?