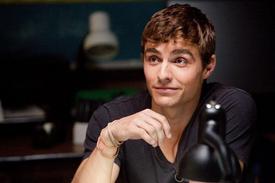 You're always cast as the jerk, but you're really a super nice guy, right?

I like to think so. I hope so. I don't really know why I keep getting roles as jerks or assholes in movies. I was talking about this to someone recently. They told me that I had the face of an asshole, which I'm not sure how to take. It's kind of fun to play a role that is completely outside yourself, but at this point I think I've exhausted the role of the asshole.

Did you study the great '80s bad guys to master how to be hateable but still entertaining?

I can't really say I studied all the assholes through film. I guess when I play one of these despicable characters I try to keep it grounded as possible. It's easy to come across as overly mean and have absolutely no redeeming qualities. I try to make these assholes three-dimensional, to show where they're coming from and why they are such hateful people sometimes.

Like how in 21 Jump Street, your jerk is really into saving the environment.

I'll take that. I give the writers credit for trying to update the asshole and make him more modern. Rather than be the typical cool kid at school, like the jock or the prom king, make the cool kid in school more of a hipster, organic, granola type guy.

It got me wondering what popular kids will be like in another ten years? How are they going to evolve?

That's a tough question. Where do you think the popular kids are going?

I think they're all going to be locked in their rooms shooting videos on the next generation of YouTube. They'll probably be too big to leave the house.

At least you could make fun of them from afar, because they can't come out of their computer and beat you up. This movie is about cops in their 20s who pose as high school students, but in real life, you're a 26-year-old actor who's still able to play a high school student.

Yeah, I look very young for my age. Everyone in the business says it's a good thing, but to be honest sometimes you want to look your age, to not be treated in a certain way based on the way you look.

I like to think that when people actually get to know me, they believe I'm closer to my actual age. I keep telling myself I'm done with high school roles, but then an amazing movie like 21 Jump Street comes along. I fought hard for that role, despite playing another 17, 18-year-old kid. I just wanted to be a part of it.

Have you considered growing a mustache?

Trust me, I've tried. It gets weird when I try to grow facial hair. I did a movie after Jump Street called Warm Bodies. The director told me a couple weeks before we started to grow out my facial hair. He wanted to see what it looked like. I showed up, and he's like, "How long have you been growing that?" and I was like, "Maybe two, three weeks." He goes "Shave it, get rid of it, it's nasty." Trust me, I've tried to go down that route.

What other roles are you looking out for? Next, you're in Now You See Me, which is about magicians who rob banks. I saw that you are cast in Rosaline. It sounds like a really interesting, twisted version of Romeo and Juliet.

It's my first real action movie. The last two weeks, I've had my ass kicked. I've been doing a fight sequence with Mark Ruffalo, who I admire so much, and I'm so happy to be around him and working with the guy. We've been working on this fight sequence which turned out to be the most real fight I've ever been in in my life. Granted, I'm not a bruiser. It's not like I've never been in a real fight, but we kicked the s--t out each other. My entire body is a wreck. I'm just hammered to meat at this point. It's one of those things where these last few weeks there are moments when you physically can't go on. Then you take a look at some of the dailies and it looks so cool. We're working with this awesome action director Louis Leterrier who did the Transporter movies and the new Incredible Hulk movie. The footage looks so amazing. It kind of revives you and it's like, "Alright, I guess we can do a couple more takes."

And Mark Ruffalo is all buffed up from playing The Hulk himself.

Yeah, he is a tough dude. At the beginning of one of the long days of fighting, I accidentally hurt his shoulder. I felt awful, but I think it kind of amped up the aggression in the scene. It got to the point when we were grappling, we were really going after each other. Don't get me wrong—we get along great. But when you're in the heat of the moment, it gets raw, it gets nasty. I hope the authenticity comes across on screen.

You hear a lot from actresses that being attractive makes it harder for people to see you in funny roles. Is that a challenge you've see yourself?

I don't really picture myself as the good looking dude in anything I do. Maybe growing up with two older brothers who constantly gave me shit, I learned to make fun of myself and not take myself too seriously. I guess I'm comfortable making myself look like an idiot on screen. Doing things people might not consider attractive on screen.

The news this week is that USC is a little upset by your reality show Undergrads. What do you think the cops would be there for if they were doing a 21 Jump Street at college? By the way, I went to USC, so you can make fun of it to me.

[Laughs] Are you prying for me to rip on USC?

To be honest, I had a great time at USC. At the same time, I'm not one these guys who is pining to go back to school. When I was done, I was done with it. When I do go back to USC for a football game or whatever, what I've noticed—or what I've forgotten—is how hard kids party in college. I have a night out like that these days and it ruins my whole week. These kids wake up and do it again five nights a week. Maybe even every night of the week. You build up the stamina. At the time, I was just like them. I'm not trying to say I'm above it—I just can't do it anymore. That's what I'm the most surprised by: these kids' stamina in terms of partying.

What is a classic favorite movie role that you wish could have played?

I've been re-watching Montgomery Clift movies recently. It would be incredible to play his role in A Place in the Sun. I think what set him apart is he had this gentle, soft demeanor. At the same time, he can flip a switch and be really intense. He can have this fire to him. I like to believe that both of those sides are in me, too. Again, this is from me—I don't know if this comes across from anything that I do—but I'd like to show a more vulnerable side, then maybe show this darker, more intense side as well.

What's going to happen when you and your brother start going up for roles against each other?

I don't know if that will ever happen, to be honest. Even if does, and I'm not just saying this, we are not competitive with each other. Although, we might have similar mannerisms or similar physical features, we couldn't be more different. I hope I can get roles where people can kind of see how different we really are. There are certain roles that he can kill that I could never touch. I hope that it's vice-versa.

Or you could just call dibs before it gets weird.

Sure. Let's work on that.