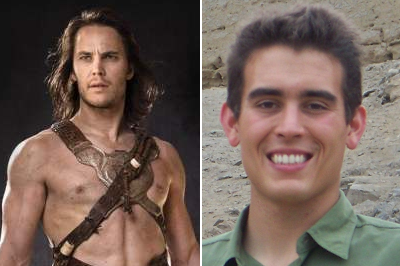 John Carter was written 100 years ago in 1912 and you see the scientific thinking of that day in Edgar Rice Burroughs' depictions of these creatures and their society. At the time, anthropologists thought along the lines of what's called "unilineal evolution," the idea that people and groups evolve from simple societies to what was considered the pinnacle of social evolution: European civilization. It's essentially a racist view, that the people who the colonialists encountered were less-evolved, barbaric, and it was their job to save them. One early anthropologist, Lewis Henry Morgan, even categorized groups based on a scale of savagery to barbarism to civilization. Savages, for example, had fire and bows and arrows, but once metal-working and agriculture developed, you were considered a barbarian. Finally, once you developed writing, you were civilized.

What you see on Barsoom is that you have the red aliens who are civilized and have science—they read, they fly—as opposed to these Tharks who live in a savage, brutal society. The leader of the Tharks, Tars Tarkas, his authority is based on his warrior prowess and strength—think of gorillas, chimps, and other primates with a dominant male who stays on top until someone challenges him for power. The red people, on the other hand, exhibit clear lineages and rules of inheritance, something people of Burroughs' time would consider part of civilized society. Even the Thark's hatchlings are eggs that have all been mixed up and then the women come and fight over them.

They've said that Burroughs was inspired by Native Americans when he created the Tharks. In the movie, the Tharks even live in these cliff dwellings like the Pueblo Indians. There are holes in the roof so you can work under the moonlight. There are also ladders connecting different dwellings—the architecture makes sense, it's really adapted to the environment.

Also, it would make sense that in the desert environment of Mars, the people are tall and slender. Presenting the aliens as tall, 12-foot creatures that are incredibly thin is accurate in terms of physical anthropology. We've found that the human body is proportionate to the environment that you live in. There's an Allen's Rule and a Bergmann's Rule. Joel Allen a late 19th-century biologist, correlated limb proportions to climate and he found that creatures that live in warmer climates have longer, slimmer limbs than those who live in colder environments. This work was a take on the work of Christian Bergmann who studied the body mass of species and found that there were more massive creatures in cold environments then there were along the equator. By having a slender structure, you have more surface area, which allows you to expel heat better. If you look at modern Eskimos, for example, they are short, stocky and adapted to cold weather, whereas the contemporary Nuer of Sudan are some of the tallest, thinnest beings on the planet.

The war between Zodanga and Helium—the green aliens and the red aliens—is a very modern thing. I've been studying the origins of warfare and I've found that scholars have characterized warfare as more savage and prevalent in the past than today. However, if you look at the archaeological evidence of skeletal trauma-head injuries, parry fractures, embedded projectile points—there's virtually no evidence of violent conflict before the advent of agriculture. If human history was put on a 24-hour clock, it's only the last two minutes before midnight that we've been farming. Most of our existence was hunting and gathering, where if you don't have enough food, you simply move. When agriculture happened and people became sedentary, they were tied to wherever they built a house and tended their fields. If they ran out of food, they first looked to their neighbors for help. Often, you cooperate. But if that's not possible, you go to war. Humans engage in warfare only when it's their last hope.

What really rang true to me in John Carter were the dynamics of cultural contact. For example, where I work in Peru is a small, isolated town 100 kilometers north of Lima, which is of course a very metropolitan area with people of all different races and backgrounds. In an environment like that smaller town, when you're an abnormally tall white gringo, you get a lot of stares, whispers, finger-pointing—you become an alien dropped into a new environment. These moments of cultural contact is where you get a sense of otherness, and I saw a lot of that in John Carter. When John Carter is transplanted to Mars, at first the Tharks wanted to kill him. It's shoot first, ask questions later. When he and the Tharks finally start talking, it's some of the best parts of the movie: they're dancing, doing sign language, talking about jumping, figuring out words. It's like what one of my professors once told me, "The greatest tool an anthropologist has is his or her smile." You get transplanted to places where you might be the only person who looks like you that people have ever seen, and it's nerve-wracking for you and for them. The best thing you can do is laugh. People say math is the common language of human beings—it's also humor. You definitely get a sense of that in the movie.

John Carter's office at the beginning of the movie is almost exactly what people imagine as an anthropologist's office, which movie directors almost never get right and they definitely don't here. He's a wanderer, closet academic, Indiana Jones-type. A few lines on a board, Maya glyphs, hieroglyphs, some other marks I've never seen, maps and some artifacts, the spider-the spider actually resembles the Egyptian sun as depicted during the reign of Akhenaten, Tutankhamen's grandfather. It's a depiction of a befuddled professor's office, a madman. Although students may consider their professors eclectic madmen, today most anthropologists are a bit more focused.

If I were an anthropologist put on Barsoom, I'd try to integrate myself within the Tharks and learn more about their lifestyle. I'd definitely need to know about the current political climate first. That's always a good idea when you're thrust into an alien environment, here literally. Political unrest kept me out of Bolivia. When they transitioned to the current president, Evo Morales, I had to stay in the United States for an extra week because the Bolivian airport was shut down. On Barsoom, I'd be drawn to the civil war, but I wouldn't want to become involved. As an anthropologist, we like to keep our heads down in these types of situations. I actually have a shirt from my old archeology club at Boston University that says, "Don't shoot—I'm an archeologist!" in 13 different languages. Then again, Tharks don't read.