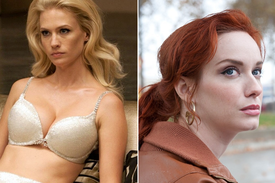 After a ridiculous 17-month-long hiatus (protracted by heated negotiations between cable channel AMC and show-runner Matthew Weiner), Mad Men will finally return for its fifth season on Sunday, March 25th. The actors have kept busy trying to break into the movies. Jon Hamm, who plays the brilliant ad man and compulsive fingerbanger Don Draper, seduced Kristen Wiig in Bridesmaids, wedged himself into Sucker Punch and played the only bearable character in Friends with Kids, his longtime girlfriend Jennifer Westfeldt's yuppie baby dramedy that was released last week. This Friday, two ladies of Mad Men take shots at the big screen: January Jones in the revenge-thriller Seeking Justice, and Christina Hendricks in the bleak teacher drama Detachment, which boasts a talented ensemble that also includes Adrien Brody, James Caan, Marcia Gay Harden.

As Julianna Margulies, Kelsey Grammer and Claire Danes can attest, it's immensely difficult for TV stars to successfully transition to the movies. Jones and Hendricks certainly mean to have careers beyond Mad Men, as their growing movie credits prove. (Unlike Elisabeth Moss, Mad Men's junior copywriter Peggy Olson, who seems to have spent her hiatus underground.) Of course, every time you have two gorgeous women, you want them to catfight. So who is poised to have the better film career and drink mimosas with Jon Hamm at his Malibu mansion a decade from now while laughing at her former co-star's picture on the "Where Are They Now?" page: the cautious, cool blonde Jones or the experimental, vintage va-va-voom Hendricks? Let's break their prospects down using science.

Jones: Like most working starlets, Jones starred in a string of minor roles as "Pretty Girl" in small—to medium—budget movies before embodying everyone's least favorite character on Mad Men. Jones was pretty in Anger Management, Love, Actually, Dirty Dancing: Havana Nights, We Are Marshall, and very pretty in American Wedding, the third installment of the American Pie tetralogy (ugh).
Hendricks: Before Mad Men, Hendricks drifted from set to set, guest-starring in a number of TV shows, among them Beggars and Choosers, ER, Miss Match, Tru Calling, Without a Trace, and Las Vegas. She also made two retroactively awesome appearances on Joss Whedon's much-mourned Firefly.
Advantage: Hendricks by a long shot. Pretty blonde girls are a dime-a-dozen in Hollywood, but a recurring role on a cult hit will garner a lifetime of adoring recognition (and convention appearance fees).

Jones: Jones has been surprisingly choosy with her film projects. Her turn as a DJ-groupie in Richard Curtis' Pirate Radio showed range, and she expertly utilized her Mad Men pedigree to get cast in Unknown and the high-profile X-Men prequel First Class.
Hendricks: After Mad Men premiered, Hendricks graduated from minor roles in mid-tier shows to minor roles in middling movies (Leonie, Life As We Know It, The Family Tree, I Don't Know How She Does It, and yes, Drive, ie: the one where she gets shot in the head). That's not much of a bump, though—she has a knack for getting suckered into bad projects.
Advantage: Jones, since you've probably seen at least one of her films.

Jones: Although she appeared on screen for all of 20 minutes in First Class, there was as much talk about Jones and her character Emma Frost's skin-tight cat-suit as there was about the film's actual stars, Michael Fassbender and James McAvoy.
Hendricks: It depends heavily on the audience. To hipster cinephiles, it's Blanche, the doomed small-time crook in Drive. For rom com diehards, she's probably more known for playing an Alison in Life As We Know It or an Allison in I Don't Know How She Does It.
Advantage: Jones. Courting fanboy boners is the fastest way for an actress to get noticed these days. Just ask Olivia Munn.

Jones: Jones hasn't done much to counteract the "mean girl/overgrown brat" vibe audiences get from watching her portrayal of the petulant Betty. She added fuel to her detractors' fire through her disastrous turn as SNL host, and the flames grew into a howling conflagration when it was revealed that Ashton Kutcher, of all people, had told her that she was a bad actress while they were dating. She frequently comes across as both pretentious and defensive, especially when declaring to the press that she lies during her interviews, so no one should believe anything she says in interviews anyway. (That is some sub-Warholian nonsense right there, but also kinda commendable for her willingness to expose the PR game.)
Hendricks: Hendricks, for her part, comes across as a genuinely grounded, kinda boring person, which probably means that she's had some really great PR training. Between posing for sexy covers on lad mags, complaining that she wants to be treated like a serious thespian in fashion mags, and being the new poster lady for curvy women (always a winning PR move), she's skillfully covering all her fan bases.
Advantage: Hendricks. Jones lost this one so bad.

Jones: Absolutely nothing on the horizon. This isn't too surprising given Jones' new status as a single mom, but her agent should line up something for her.
Hendricks: Hendricks has two starring roles coming up, in Saved! director Brian Dannelly's Struck by Lightning and in Orlando director Sally Potter's Bomb. Neither is likely to be a huge hit, but both projects should afford her plenty of indie cred.
Advantage: Hendricks, because work is better than no work, and she may finally get to showcase her talents under Dannelly's—and especially Potter's—direction.

Jones: For all the flack she receives about her actual acting, Jones has been pretty canny with her career as an emerging star. She's chosen prominent supporting roles in First Class and Unknown that feature her ice-princess hotness without revealing her justly maligned acting abilities. (She may be typecast, but there are worse things to be known for than the new Grace Kelly.) And she better get her agent to find some promising scripts, lest Brooklyn Decker snap them up.
Hendricks: It's hard to tell how picky Hendricks is—or should be—about her projects. For all the media attention on her curves, she probably isn't offered a lot of roles, and certainly very few starring ones, because of her body type. Movies still demand a sameness in character archetypes for women, and Hendricks' graceful slopes probably restrict her chances at a lot of roles, though those same restrictions might help her become a versatile character actor.
Win: Jones is the current victor, but Hendricks is gaining fast, and will probably win it in the long haul—as long as she guns for Michelle Williams' post-TV career, not Jennifer Aniston's.