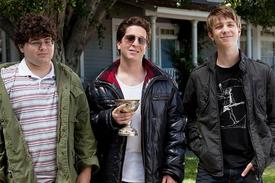 Five years ago, Michael Bacall was a character actor and Quentin Tarantino favorite racking up credits in Death Proof and Inglourious Basterds. Then came his big career change and the actor who helped Tarantino warp the minds of a generation became the screenwriter warping the minds of the generation after. At 39, Bacall is now the go-to guy for movies about wild youth, be it violent (Manic), video game-obsessed (Scott Pilgrim vs. the World), party-crazy (Project X) or just totally insane (the upcoming 21 Jump Street, co-written with Jonah Hill). How does Bacall stay so mentally young? Spying on kids on YouTube, of course. The next great comedy writer talks to Boxoffice about writing R-rated teen movies that teens can't even see and how much convincing he had to do to get every boob montage, fire ball and flying dog in the final cut of Project X. (Answer: surprisingly little.)

You've written the ultimate teenager movie, except none of them can see it unless they're 18.

They'll figure it out. [Laughs]

Don't tell me you're passionately endorsing them sneaking into theaters?

Of course not—that's horrendous! They should go with an adult who will pay for a ticket.

A bonding experience for parents and teens. I'm trying to picture the conversations they'll have after.

Well the first conversation they should have is, "What kind of movie did I just watch?" I think that most younger people who see it will consider it a comedy, while older people would consider it a horror movie.

Was there a point when you were working on the script for Project X when you put something in and thought, "There's no way I can get away with this"?

Yeah, from the first night that I worked on it! Particularly the third act at the end of the movie. I went so out of control when I was writing the initial treatment. I did it with an evil grin because Todd [Phillips, director of The Hangover, producer of Project X] said, "Go crazy!" Which was an amazing thing to hear from a producer. I just expected even on budgetary level that it wouldn't be possible to burn down an entire neighborhood house, to have fire helicopters putting out the flames with water drops—but it's all in there. I think they pulled it off on an amazing scale on the budget they shot. I learned that Joel Silver [producer] is not going to say no to the flamethrower—if anything he's going to ask for more takes.

Tying balloons to the dog?

I don't even remember at what point that idea came out. I remember being pretty happy when thought of that little guy floating up there. It was awesome. My favorite still from all the publicity stuff is the dog in the bouncy castle mid-air just cruising.

I didn't love high school. I don't know if anyone does. I never really felt like I fit in. The clothes change, the lingo changes, but I'm sure it's always similar. Kids felt especially stratified when I was growing up. I did feel especially John Hughes-ian. There was a very heightened group of popular kids who could get away with whatever they wanted to. It's not say I had a bad high-school experience—I got along with everyone, I didn't really fit into any one group in particular. I would float in and out. I was also acting a lot. I would be on a movie set and it was a dream. I felt more comfortable in a professional environment—I was pretty grateful that I got to have that experience when I was a kid.

Having been a young actor yourself, what do you see as a common mistake a lot of writers make when they try to capture what young people think, do, and say?

The thing that always flagged for me was writers who thought that they had to capture any trendy thing that kids would be saying. When you start to rely on that, it just sounds like pandering. You have to treat children, teenagers, adults, the elderly—anyone—just as a human being in really thought-out characters, first and foremost. It's what makes them watchable. All the trendy phrases, clothing, any of that stuff should be secondary. When I did research for 21 Jump Street, I went back to my high school. I spent a couple of days talking to administrators, school nurses. I'd cruise around the campus at lunch looking at kids. It good to keep a grasp of that stuff, and hear how kids are talking. But when I was auditioning as a kid, writers were focusing on how kids were talking, not on who the kids were-and it rings false.

It seems like it would be really hard to stay in touch with the way teen life is now, mainly because of how technology has changed so much. It's such a different mindset.

It's also a good thing. That technological access that kids have these days, well, it may not be good for them, but for a writer it makes it a lot easier to access what's going on. The singularity is here: kids are merging with their online and YouTube personalities increasingly. It becomes a lot easier to get the vibe of what's going on because you can just check out a kid's Facebook page, their YouTube page. It's a lot different when I was a kid, but it's kind of fun in that regard.

Tell me about the guy holding the camera and how you conceived of his character. He's really silent—even compared to other found footage movies—yet, especially in your epilogue, he comes across as the creepiest character in the movie.

That was the part of the earlier phase of development that took the longest nail down. We didn't know if it should be the three guys themselves with the camera constantly passing it off to each other? Late in the game, the decision was made to have a character who mainly functions as a cinematographer. I think in that first-person POV-type found footage filmmaking, that behind-the-camera voiceover can get a little bit grating. It can take you out of the movie. I think it was ultimately a good decision to have a mostly silent cameraman following them around the whole time.

There are a ton of boobs in Project X. Is that in your script? Did you just put "Insert boob montage here"?

I'm going to have to give credit to one of the producers for that. I would get emails from him with three words: "More boobs, please."

Well, the "please" makes it so polite.