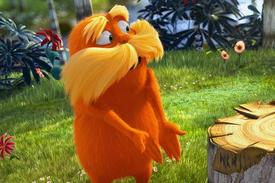 Director Chris Renaud has had a long career working in animation going back to children's television in the 1990s, but it was his Oscar-nominated work on an Ice Age short called No Time For Nuts that helped him transition into feature animated films. After finding mainstream success directing 2010's Despicable Me, Renaud took on an adaptation of Dr. Suess' environmentalist story The Lorax, a daunting challenge considering the shaky history of Suess film adaptations. Boxoffice chatted with Renaud in advance of The Lorax's release; we talked about overcoming 3D's visual issues, his work in the comic book industry, and how he used It's Always Sunny In Philadelphia to convince the studio to cast Danny Devito in the title role.

The Lorax is beautifully animated. If I'm not mistaken, this is the first time Illumination Entertainment has attempted full IMAX 3D—

Did that present any significant technical challenges?

I don't know about a specific challenge technically. What we did try to do, and what I tried to keep in mind for this film, even compared to Despicable Me, is trying to push the 3D experience a bit.

Mostly because you're in a forest for a lot of the film, or you're in a city that you're sort of moving through, which is a little bit different just from a narrative point of view than Despicable Me. I think those elements, particularly a forest—and Avatar is a perfect example of this—that really lend themselves to kind of 'moving through.' And for me, having seen it both ways, I actually prefer the movie in 3D rather than 2D. So it really was more about a narrative point of view than any technical challenge.

Given that you prefer the film in 3D, do you feel that 3D particularly suits a film based on a Dr. Suess story? Was that just a happy accident?

I do think certain stories can lend themselves to 3D more than others, particularly one like The Lorax which has those elements I mentioned. But you sort of plan it going in, whether using wider lenses, or how you move past something.

This might be a question more for the technical crew, whom you supervised, but 3D in The Lorax is remarkable in that is lacks the muddy quality many 3D films have. While 3D has improved recently, The Lorax was particularly crisp and clear. Can you talk a little about how you achieved that?

I think that the challenge is that 3D, when you put on the glasses, tends to go dark, and go green, just because of the color of the lens. So we do a color grading that is 3D specific, and specific to both Dolby and Real 3D. But it feels like that this movie is holding up well under 3D because it's so bright (laughs), it's very bright and it's full of sort of jewel colors. Actually, if you lift your glasses you can see that it's super bright (gesticulates). It's almost blown out but when you put the glasses on it feels okay. So it's really about that process, which is really close to the end. But I think it's holding up because there's a lot of brightness, a lot of color that compensates well.

The writers of The Lorax are the same team who wrote Horton Hears A Who. When you came onto the project did you choose them specifically, or were they there first?

They were first, but I think I was a great fit. I mean, I'd been talking to Chris (Meledandri, founder of Illumination Entertainment) about this for some time. They did a pass of the script before I came on board. But I think it's a good fit. And of course, we talk with the Suess estate all the time, and they know their work and trust them, so they felt we were going to do an honorable take on Suess' work.

You've expanded The Lorax somewhat. Obviously you've kept the same basic frame, but you added this extra story about the kid, Ted (voiced by Zac Efron), and his need to impress a girl (voiced by Taylor Swift). I realize that we're talking about a very short children's book versus a feature, but can you talk about the decision to expand the story?

I think that when adapting anything you have to take into account the form your going for, a movie in this case. The stakes in the movie are with Ted, but it's definitely not that way in the book which is a lot more open ended. The stakes in the book are very present day, kind of 'make a change,' and we felt like we needed the audience to have someone to identify with who might make the change, and so we wanted to give him some motivation. That's sort of how that story came about.

I think it's a nice allegory for us. The Once-ler (Ed Helms) is handing this off to the next generation and urging them to do a better job. When we were working on the ending ... I probably shouldn't give the ending away—

(Laughs) OK! Well with our ending, which [SPOILER ALERT] shows the Lorax returning to embrace the Once-ler, we were trying to balance it with the way the book ends. And it's interesting because on the fly leaf of the book, the inner cover, there's this drawing inside of the Lorax with the old Once-ler, so there's kind of an implication there, which I think is cool. We wanted, when the Once-ler is growing these little trees, not to imply that everything's better, but to suggest the start of those changes. Ultimately we wanted to balance what would be a satisfying movie experience with the spirit of the book.

Let's talk about casting Danny Devito as the Lorax. Were you always thinking about him for the role?

Absolutely. We were talking about other things of course, but we put Danny's Voice from It's Always Sunny In Philadelphia—

I was going to ask you about that show!

(Laughs) We put his voice from a scene in the show, against a painting of the Lorax, which is all we had at the time.

Oh god, it's hilarious, I can't remember which episode*, I just remember the line, it's the scene where he says "I know what the billboard's going to look like already: two gorgeous girls up there, giant cans, me in the middle with my thumbs up." We literally put that quote behind the Lorax painting and man, it was it. There was no second choice after that.

When did you decide Ed Helms was going to voice the Once-ler?

Ed was also a kind of early 'gosh that would be great' choice for us. And Ed, you can see this in The Hangover, he's got a kind of innocence but he can go to a dark place pretty fast. And for the Once-ler, he's not a creature, we knew he had to be a human, we wanted it to be somebody you could identify with, rather than just an evil guy. I mean we've all made bad choices in our lives. And Ed can do that very well—he pulls it off beautifully. He was very enthusiastic in the role, and he was a great fit, especially with Danny.

Going back to the film's ending, and the hint that things are going to get better, and wanting to inspire kids to go out and make a change. Do you have kids of your own? And if so, were you making a message for them?

I do have kids. And I think that's an important part of the story, showing the world that Ted lives in. It's kind of our world, and that's an important choice. We did it for entertainment reasons of course, it's kind of like Disneyland or Vegas which gave us a lot of things to play around with. But it's almost like the simpler choice would have been to go with the Blade Runner type world, which is a little bit the implication in the book.

Those things that we love, like Disneyland, and Vegas, and our big cars, how do we balance that with having to live on this planet with 7 billion other people. My daughters are in Girl Scouts, my son is in Boy Scouts, we're always turning off lights, trying to get those habits in place as they become adults. And every movie I've done—and it's only been two so far—I always think about what they'll take away from it.

Do you think you're going to stick with family friendly animation, or move into other areas?

From my perspective right now, and this might change later, I love doing family animation, I really do. At this point, I'm not thinking about live action. I mean, you think about guys like Brad Bird, gosh what he did with Mission: Impossible is amazing, but I have so much to learn still, but I started in children's television and before that I was in comic books, and I've always kind of liked that kind of area.

What comics were you involved with?

I worked for Marvel and DC. I only did it for about 5 years—

(laughs) I had my own book with Marvel called Starfleet Academy. I did some Batman, wrote a couple of small stories, did some Superman. It was very scattered, the time I was involved was when Marvel was in bankruptcy, so it was very different than things presumably are now. I loved it but I wasn't a huge star or anything and keeping steady work was tough. So I was very fortunate in getting to work with a guy named Mitchell Kriegman who was in children's television, he did Bear in the Big Blue House. Another show I did with him is called It's a Big Big World, and I did a Winnie the Pooh show. So I transitioned out of comics, but it was a great experience. The great thing about penciling comics is that you're the cinematographer, but there are no notes or anything. That's why it's so hard to break in. They hand you a script, say "I need it by the end of the month", and that's great practice for working in film. Having that colorful visual background also helped putting together something like The Lorax.