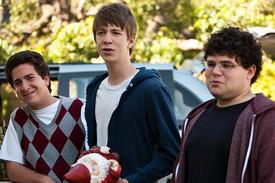 Love to party? What if you had to for 12 hours every night for five weeks—that's 420 hours of madness [ahem, coincidence], enough to exhaust even Steve-O at the height of his powers. And then at the end of it, the best 90 minutes of yourself dancing, kissing and pounding drinks was going to be screened for your mom...and a million other moviegoers. Meet Thomas Mann, Oliver Cooper and Jonathan Daniel Brown, three actors who were barely old enough for booze when they were chosen to throw the ultimate house-party-of-horrors in the found footage flick Project X. How did they survive with their sanity intact? The guys tell Boxoffice about the dangers of O'Douls, the joys-and perils-of making out with extras, and how they think their grandparents will feel about their very R-rated big screen debut.

Is there anyone who you're a little bit nervous about them seeing Project X—a grandma?

Oliver Cooper: My grandparents are coming to the premiere.

Thomas Mann: My great-aunt just saw it in Austin and she thought it was "Outrageous!"

Oliver: My grandparents are free spirits. As much as they can be, being grandparents. They're not overly religious, so I don't think they'll be, "Oh my god, I can't believe you disgraced the Jewish people!"

Jonathan Daniel Brown: They're having a screening party at the Agoura Hills Senior Retreat where my bubbie is staying. I'm just kidding—the three of them would drop dead on the spot, it's a terrible idea.

Oliver: Your mom said she was worried about your grandparents.

Jonathan: My mom is worried about my grandparents. But whatever, they're 90—they'll live. I mean, hopefully. They've seen worse. They dealt with World War II. World War II was a lot more deadly than the Project X party. Proportionally.

I've heard actors say that one of the hardest things to do is play drunk. Did you find that to be true?

Thomas: Sometimes. We were doing night shoots from 5pm to 5am, give or take, so we were just actually exhausted and I think it showed.

Oliver: Red Bull. Lots of energy drinks—they helped me feel that way. And also, the make-up.

Jonathan: Not just that, but the fact that we're shooting a constant party for 12 hours. Nima [Nourizadeh, the director] kept the party going even between takes. There's a DJ on set playing, there's extras who are dancing their asses off. Ten hours of dancing and doing all sorts of crazy things will make you feel drunk. I passed out at the wheel coming home one night and I had to call and get help. It was Night #2, actually.

And during the whole second half of the film, every scene has this high level of intensity—you had to get in that mindset every time they called "Action!" There's no calm conversations.

Thomas: It just felt like a party. We had no problem getting in that headspace.

Oliver: Once you have that many people on a set—and the extras seemed like they were really getting into it—when there's all this dancing and music in between takes and during takes, you just really feel the energy.

Jonathan: And it was shot in order, which is rare for a movie.

Thomas: Because once you tear down a house, you can't just build it back up again. Shooting chronologically helped, because by the end of the five-week night shoot, we were all exhausted, so it was easy to play.

Jonathan: The cool thing that Nima did was he made the party a character. It's as much a character as the rest of us are—it's like an organism, this constantly shifting, moving, living thing.

Jonathan: Have you seen Akira? It's like the party is the Tetsuo Blob at the end. Okay, that's really obscure.

There are people who will love you forever for saying that.

Jonathan: I hope so. I like being loved. It's so lonely.

So you had energy drinks in your cups. I was thinking you'd seize the moment to get healthy and drink a lot of pomegranate juice and green tea.

Jonathan: They were organic energy drinks. We took shots of vitamin goop. The worst.

Oliver: They were gross. We also had a choice of apple juice or O'Douls. I always drank the O'Douls because you can kind of fool yourself.

Jonathan: Non-alcoholic beer actually has a very limited quantity of alcohol in it, which is necessary to create the flavor. After your 30th, you actually do get a tiny, tiny, tiny buzz. Nothing really impairing, but like if you had 50 cups of coffee. Only, the coffee was O'Douls.

After a full night's shoot, how did you unwind? Sounds like a bar would be the last place on your mind. Did you go home and listen to classical music and read the New Yorker?

Jonathan: Went to bed, woke up, went to work, partied for 12 more hours, went to bed. There's something really weird about mom and dad getting up and going to work when you're coming home from work. It really isolated us—we were cut off from civilization, living like vampires.

Knowing that Todd Phillips was your producer and that this was going to be seen as the teen Hangover, when you first met, were you wondering who was the Zack Galifianakis and who was the Ed Helms?

Jonathan: The weird thing about movie archetypes is that people assign stars to them when really, they've been around forever. People could say, "That guy is a Michael Cera clone." Well, go back to 1970-something and Michael Cera was there before he was even born as Timothy Matheson doing Otter in Animal House.

Oliver: I never really go, "Oh, Zach Galifianakis was hilarious so I'm going to try to do that." And I know that for me, when I'm thinking of a character, I take from myself and usually a family member or friend.

Wait—so people you know might see Project X and see themselves in you?

Oliver: One of my friends-who saw it in Columbus at a Vice screening—I 100 percent based some things on him. He was suck a dick to me growing up, beating me up all the time. He saw it and he was like, "That's totally me."

Jonathan: It was an eye-opening moment for him: "That guy's an asshole—maybe I should go get some help?

Oliver: He's cool being an asshole. He was like, "Yeah, I'm an asshole."

Which scene were you on edge about shooting?

Thomas: A sex scene is always nerve-wracking. Just because you never know exactly how the other person is feeling about it. You're like, "Oh, I can't act like I'm too into it or else they'll think I like them, or whatever."

Jonathan: Oliver and I got to make out with random girls so we didn't have any of that pressure. We were like: "You!"

Oliver: I got to motorboat that girl—

Thomas: She loved it—

Oliver: And that only made it into the end credits.

Now I'm picturing you getting your pick of extras.

Jonathan: We lined them up—

Oliver: We did get to do make-out montages. They had like ten girls one night at the end of the night, this last second thing, and I was so excited because they were really beautiful and stuff. And then Nima was like, "They're way too hot for him," and he brought in a bunch of gross-looking girls.

Jonathan: They'd been on set eating a diet of tamales and donuts for the last 12 hours.

Jonathan: C'mon. Don't you love a girl who tastes like Cool Ranch?

Jonathan: We kissed the same girl! It wasn't in the movie, but there's a scene where Costa drunkenly starts to make out with this girl and I immediately shove him out of the way and continue to make out with her while he cheers.

Oliver: Her breath was, whoa.

Oliver: A bag of Doritos.

I can't imagine you got much sympathy from your friends complaining that yes, you got to make out with a bunch of girls, but their breath wasn't that great.

Jonathan: Movie star white people problems. It's the worst complaint ever. It's like: "Meanwhile, in Africa..."

Oliver: It's a nickname.

Thomas: He actually mentions once that his real name is Oliver.

Oliver: It's kind of left up for the audience to decide. Costa was the name in the original script. Costa Something Something.

Thomas: It was Costa Simon Paul?

Jonathan: Yeah, I was Sam Gonzalez and Thomas was Paul Kub and Oliver was Jeremy Costa.

Oliver: But I think of his name as Oliver Costa. I even say it when I go to the neighbors' house. You'd only see it if you were paying real close attention, but I say, "My name is Oliver, I'm throwing a little party for my friend Thomas." So Oliver is my professional name. Costa is my asshole name.

How did deciding to use your own names come about?

Thomas: It was something that Nima decided once we were all cast. He just sat us down and said, "I'm thinking of having the names be your names. That way it will feel realer to you guys, and to the audience, hopefully." It was a little strange at first.

Jonathan: Once you got over the initial weirdness of playing a version of yourself, it actually became much more natural and easy to do than, say, having to do a performance and then be like, "Bob!" We call each other our real names in real life and on camera and it's smooth.

Oliver: They called me Costa. Not these guys, but I would get called Costa by Scott [Budnick] the producer, by Nima.

And since the film is both made to look like found footage and it's your first starring feature, how prepared are you for the next few years when every time you're buying a six-pack at 7-Eleven, someone's going to go, "Hey Thomas! Where's the party at?"

Oliver: That's a lot of pressure.

Jonathan: Where is the party at?

How similar are you to your characters? Oliver, are you really the guy who gets everyone in trouble?

Oliver: No. I'd actually say I'm more of a follower. I won't plan anything.

Jonathan: He's the one that we have to drag to come out of his house. And then he'll flake last minute. "It's 9pm guys! It's late!" I would say our characters are reversed: I'm sort of more Costa-y—I'm not an asshole, but I am boisterous and gregarious. And Oliver's a homebody.

Thomas: I think I'm like how I was in high school. A little more shy.

Oliver: There was a point in my life, like junior high, where I thought I was the coolest dude ever. I had both my ears pierced, I wore white wifebeaters and flannels. I wanted to be an asshole.

Oliver: I wanted to be Vanilla Ice. Coolio was my choice of music. Now I listen to the Beach Boys.

One grows old so fast...

Jonathan: Him faster than most.

So then the sequel to Project X will be you three at a really nice winery tasting merlots.