When children attack: Five more stories about killer kids—and how Katniss would fare against them 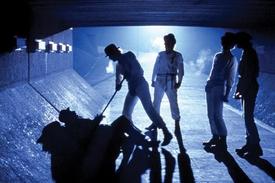 In The Hunger Games, the oppressive state of Panem enforces the obedience of the citizenry via an annual contest where each of the country's 12 districts must send one boy and one girl between the ages of 12 and 18 to compete in a battle to the death, which is then broadcast to the whole country as a reality TV show. The story borrows considerably from the myth of Theseus and the Minotaur, but what it really belongs to is the fine old literary tradition of stories about kids murdering one another. Wait, what? Yes. There are enough novels about kids killing other kids to qualify the topic as a genre. And most of them were turned into movies—the better to watch the carnage. Are we a society of sick bastards? Maybe. Let's take a close look at five of The Hunger Games' forebearers and ask: How much inspiration did they provide? How does the violence compare? And most importantly, would Katniss Everdeen survive their killer kids?

The plot: Having been evacuated from Britain during a nuclear war, a plane full of 12-year-old schoolboys crashes on a desert island. At first, the boys attempt to create something close to a functional government. However, selfishness and jealousy take hold and they ultimately fraction into warring camps fighting over access to resources. Lord of the Flies is an examination of the innate character of human beings: are we deep down basically good or are we animals living under a legal fiction that keeps our basest instincts in check? Spoiler alert: We will eventually gang up on one another and commit heinous acts of murder, choir exercises and glasses-theft.

Definitive film version: No film has managed to do justice to this story, but the 1990 version starring a young Balthazar Getty is notorious for making the kids American and slipping in references to Alf.

Hunger Games Derivation Quotient: 2/10. Goldman's tale is the Epic of Gilgamesh of kids-on-kids-violence stories, by which I mean it's the oldest of the old, and you probably only claim to have read it. It managed to both create the genre and set its tone, introducing a post-apocalyptic setting, and the dissonant concept of innocent young children killing one another, that are the trope's almost universal constants. But unlike later stories in the genre, which emphasize that violence is a symbol and symptom of political oppression, here, the culprit is the lack of any government whatsoever.

Katniss Everdeen Survival Likelihood: 7/10. These pampered British school boys have never known anything but plenty and clumsily figure out how to survive on their own. It's true these choir boys can out-sing her, but Katniss would make kebabs of them before they got the chance thanks to her superior ability with improvised weaponry. If they found themselves as participants in the Hunger Games, she wins handily within five hours.

A Clockwork Orange by Anthony Burgess (1962)

The Plot: A Clockwork Orange depicts a dystopian society in which law and order have completely broken down and roving gangs of teenage boys roam Britain looking for opportunities to rape, murder and rob. The protagonist, a 14-year-old named Alex, is eventually arrested for murder, sent to prison and subjected to an experimental procedure that forcibly turns people "good" by robbing them of free will. Released back into the general population, Alex is subjected to escalating revenge from his former victims until he becomes a near-martyr for the antigovernment cause, for which he is given a cure to the procedure and a pardon. The most chilling bit? The ultimate message is that teenage boys are scum. No, seriously. Alex doesn't stop being a violent criminal until he simply grows out of it as he approaches maturity.

Hunger Games Derivation Quotient: 3/10. The futuristic dystopian setting is here, as is the kid-on-kid violence we crave. But the creepy, authoritarian government is depicted as no big whoop compared to the gangs and ultimately, simply growing old solves the problem of kid on kid violence—no revolution required.

Katniss Everdeen Survival Likelihood: 5/10. Katniss might be quick with a bow, but she's got nothing on people who have no conscience or concept of right and wrong. Her primary advantage is her wilderness survival skills, something lacking in a city-based skirmish, which means should the makers of this year's Hunger Games choose an urban setting, she's in big trouble—unless she can teach the Mockingjays to hum "Ode to Joy."

The Plot: An urban counterpart to Lord of the Flies, The Warriors is a retelling of Xenophon's Anabasis, with a Coney Island gang (called The Dominators in the novel but simply The Warriors in the title and film) standing in for ancient Greek mercenaries. The titular gang finds itself trapped and weaponless in the Bronx after an attempt to unite all of New York's gangs under a single leader fails when said leader is assassinated. They must then fight their way through New York's boroughs while avoiding the cops—and rival gangs—in order to make it home in one piece. They take many losses along the way in their quest to return to their home turf and more peaceful life of poverty and petty crime.

Hunger Games Derivation Quotient: 1/10. Like Lord of the Flies, the kids in question suffer from a lack of supervision rather than an overabundance. However, the film version's colorful, themed gang costumes are paralleled by the outfits worn during the Hunger Games' inaugural parade, and the suggestion that there is nothing the kids can do to escape the cycle of violence is a truth the Capitol District would approve.

Katniss Everdeen Survival Likelihood: 8/10. No matter how well organized the gangs of The Warriors are, Katniss has survivalist training and the advantage of being armed to the teeth. Unless this year's Hunger Games includes subway stops and zip guns, she's a lock for the win inside of 10 hours.

The Plot: This is going to sound familiar. Battle Royale is set in an alternate timeline in which Japan's prewar dictatorship and empire never fell, where the totalitarian government terrorizes the population with a deadly contest simply called "The Project." Every year, a random group of 15-year-old kids are kidnapped, taken to a remote location, handed a random weapon, and forced to compete in a 24-hour, no-holds-barred fight to the death. And about those random weapons? One kid might get a flamethrower. The next could end up with a frying pan. Making things worse, in order to force their hands, each student is outfitted with an explosive collar; if more than one student is left standing at the end of the 24 hour period, all collars will be detonated. Deaths are announced every hour, and the book is an escalating depiction of desperate brutality.

Definitive film version: The 2000 adaptation is noteworthy both for its incredibly gory violence and the way it seems to accurately depict how 14 and 15-year-old kids would react to suddenly being expected to kill each other.

Hunger Games Derivation Quotient: 9/10. Aside from the fact that The Hunger Games is presented as a mandatory reality TV show, its premise is very, very close to Battle Royale—right down to the massive number of early deaths. Fortunately, The Hunger Games is saved by the emphasis on character and the trauma of living under constant oppression and terror. Also, it has genetically engineered animals.

Katniss Everdeen Survival Likelihood: 1/10. The kids in Battle Royale are shockingly violent and used to a much tighter timeline. If Katniss is issued anything other than an Uzi, she'll be dead within 20 minutes.

Tags: The Hunger Games, A Clockwork Orange, Lord of the Flies, The Warriors, Battle Royale
Print