Why Do Some TV Reboots Work While Others Flop? 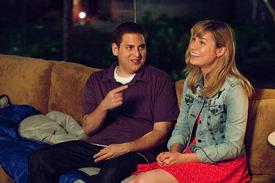 From The Fugitive to The Mod Squad, movie adaptations of popular television series have always been hit or miss. And when they miss, they really miss.

Sony faced this bleak history head-on by building a two-month-long extensive screening campaign for 21 Jump Street to generate interest in the flick after key critics took to Twitter to say that it's a TV redo that works. Mission: Successful. The R-rated re-envisioning of the '80s drama opened to a strong $36.3 million, proving that social media can help even the most skeptically-viewed genre overcome its stigma. 21 Jump Street is on-track for a $100+ million domestic box office gross, and though the film may not translate as well overseas, a worldwide tally of at least $175-200 million seems inevitable. Given Jump Street's modest $42 million budget, Sony execs will be pleased-the domestic performance alone will turn the film into a profit-maker.

It's a nice turn-around from Sony's most recent TV adaptation: 2005's Bewitched starring Will Ferrell and Nicole Kidman, which pulled a disappointing $131.4 million worldwide on its $85 million budget. In 2009, another Will Farrell-starring TV adaptation, Land of the Lost, fared even worse when it banked a paltry $68.8 million worldwide on its $100 million investment—one of Universal's biggest losses in the last few years.

Not all TV remakes flop. Get Smart was a huge winner in 2008 when it grossed $230.7 million worldwide—nearly triple its $80 million production budget. 2004's Starsky & Hutch and 2000's Charlie's Angels both reaped 2.8 times their cost. And some of the biggest hits of the '90s sprung from television: The Addams Family, Mission: Impossible and The Fugitive. No wonder Hollywood keeps trying to make TV reboots work.

But there's always the dark side of ambition. Remakes such as The Honeymooners, I Spy, and Leave It to Beaver each failed to make back their budgets at the worldwide box office. And the worst offenders are 1999's The Mod Squad ($13.3 million on its $50 million budget) and 1997's McHale's Navy ($4.5 million on its $31.2 million budget).

As usual, it comes down to quality. The successful films typically add something both modern and familiar: a major star like Harrison Ford or Tom Cruise, or a creative spin like that of The Addams Family. Likewise, the flops have a common theme: no imagination and/or no star power to draw in the interest of average moviegoers.

Proof that quality matters: Out of the 25 TV remakes we're tracked as far back as 1987's Dragnet (excluding direct series-to-film transitions such as the Star Trek franchise and The X-Files), only seven have scores over 60 percent at Rotten Tomatoes—and all seven of them were profitable.

21 Jump Street is currently 86 percent Fresh on Rotten Tomatoes and is on track to generate the highest gross-to-budget ratio in the TV genre since Mission: Impossible. It's already spawned early (if unfounded) rumors of a sequel and has further cemented Jonah Hill and Channing Tatum as reliable box office stars. Thanks to its success, we'll probably see other attempts at remaking '80s and '90s TV series. But the box office's big question is: will they be good? 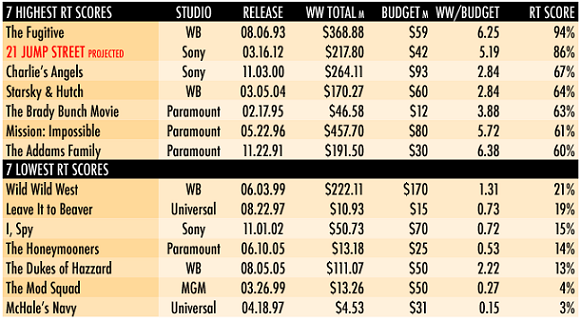