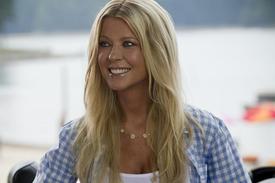 When the gang first got together to shoot American Pie, the pro was Tara Reid. The bubbly blonde started shooting commercials at 6, movies at 12, and now 24, was already an expert in knowing her way around a set. Hell, she'd already shot The Big Lebowski for the Coen Brothers. (It was Seann William Scott, aka Stifler, who was the total newbie.) What happened to her career after that is in the tabloids—and probably not entirely truthful—but after a break, Reid is back and ready to elbow her way back into the business, starting with what she worried might be an awkward actual reunion at the first American Reunion table read.

Out of the characters from the first movie, I always thought Vicky was the most mature. She seems like the only one who knows that there's a life bigger than high school—and she's the one who breaks up with her serious boyfriend after they sleep together because she knows it won't last.

Absolutely. She knew that they were going off to college and start different times in their lives and that they should see what happens. If they were meant to be, they'd come back together.

You were 24 when you shot the film. Even then, what was it like going back mentally six or seven years and remembering what it was like to be so innocent—when decisions like losing your virginity were the hugest deals in the world?

I think those decisions, you personalize them. I'll never forget my first love. You never forget losing your virginity and the importance of it and the conversations that you have. And it is real—it is a big deal. And you do care. It's something that most girls go through and she was going through that and wanted to make the right decision and do the right thing, but yet have the experience and make sure it was kind of perfect. She realizes that in life, you can't plan out every little thing, so she says, "Let's go on and see what the world has to bring us."

And because of that, I think a lot of girls who were that age used Vicky as a role model. Were you aware of that at the time?

At the time, I didn't realize. It doesn't happen anymore, but 13 years ago, all the girls who grew up with me and were that age were wondering the same thing and telling me about it: "My prom's coming up. I have a boyfriend, but I don't know if I should lose my virginity or not?" I totally went through the same thing and I heard a lot of personal stories close to Vicky's.

Tell me about re-shooting the original poster.

That was hilarious. I didn't realize how young we were, but when you really see everyone together, we were just babies.

Except Jason Biggs. He looks exactly the same.

Yeah, which is kind of amazing. And obnoxious. Didn't age at all.

But at least you got to reclaim the best pose: front-and-center in the middle of the group shot.

That was great—but it was just luck.

What was that first table read like when everyone got together and saw each other?

It was amazing, it was a trip. I was actually a little nervous for it because it was the first time I was going to see everyone as a group altogether. You didn't know what to expect: "How's everyone going to look?" "What's it going to be like?" "How is the chemistry going to be with everyone?" "Are we going to like each other again?" But the magic was there. We heard each other out loud for the first time and it was like, boom! Here it is again.

Who were you most excited to catch up with?

Everyone, everyone. Together, we're this great group and we all get along. But each one of us has their individual relationship with each other as well. It truly is a cast where everyone likes each other.

And you all came back. Was there any way someone could have said no?

I guess, of course. But once everyone was in, we all were in because that's what made the magic the first time. I think Jon and Hayden [Hurwitz and Schlossberg, the directors] did such a great job writing the script and reconnecting the dots. This really feels like a sequel to the first one.

I'm imagining the full court pressure everyone would put if someone had held out—all the phone calls to try to get the entire gang back together.

And we did—and it worked out.

Do you watch your old films?

You watch them. I mean, they're always playing on television. Yesterday, we were in the room and Van Wilder was on. You always catch yourself watching them. All the time, there's different movies that come on and I'll be like, "Hey, look!" and sometimes I'll watch a minute of it. It brings me back down memory lane. But I never rent them.

The third one—the wedding—not everyone was back. I wasn't back, Mena wasn't back, Chris wasn't back. But since this one is the high school reunion, it makes the most sense that we're all going to be there.

By the way, I thought it was unfair that in this one, your ex Kevin gets this super-hot wife, but you don't get a super-hot husband to show off.

I think Vicky is very Sex and the City—a career girl in her thirties. Her career is going great and she has all this, but I think a lot of times you have to pick love or a career. It's hard to get both. And she's searching for that. But she's moved on past high school. Even in the first film, she had. But she and Kevin still have a lot of love and respect and admiration for each other. They're friends.

But tell me the truth: isn't his new goatee awful?