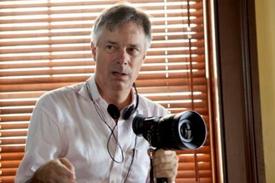 Consider the American upper crust. We watch the moral degradation of monied teens on Gossip Girl, but the truth of it is, most Americans don't get an authentic glimpse at the lives of people who have butlers. But Whit Stillman tries. A Sundance breakout in 1990 with Metropolitan—the dawn of the festival's move into the mainstream—Stillman's comedies were indies were at their best: high concept, low budget think pieces with knowing humor and social criticism. They're like watching the ruling classes' last gasp—but fun!

Stillman's latest, Damsels in Distress, stars Greta Gerwig (Arthur, Greenberg) as the leader of a group of desperately sophisticated upper-crust college girls who meddle in the lives of everyone around them—often disastrously. Trying to ask him about it is like trying to shake truth from a gentlemen spy. The true aristocrat turns all inquiry into game.

You have a particular interest in anachronisms. Tell me a little about that.

I have a passion for anachronisms and a lot of people I know do it too. Like, of course, the characters in our film.

Anachronism sometimes adds sophistication, but what you tend to demonstrate is "sophistication" which makes me wonder if this a quality you love or disdain.

I'm really excited because you put my sophistication in air quotes.

I don't know! I'm very happy with the naivety and ignorance and honest about it because, I mean I'm not quite sure what you're asking.

Does sophistication require an ignorance of the world around? Is it a fishbowl?

Well, a person who's known nice things is often considered sophisticated because they've got an awareness of what's out there. Which is why these characters' naïveté feels pointed and intriguing.

I'm not sure if I see how sophisticated they are. I suppose that Rose, played by Megalyn (Megalyn Echikunwoke), is sophisticated and I suppose Violet knows quite a few things, but I don't think sophistication is their calling card.

Well, I would say, point of view.

I think the ringleaders of the group, Violet (Greta Gerwig) and Rose, have a very strong point of view and they're trying to impose that on the world—they want the world to conform to their hopes and plans. Violet is more the innovator and creator and Rose is more the critic and commentator.

Is that why they're in distress?

Well Damsels in Distress is just a title.

Rose, I don't think, is so distressed. Violet and Lily (Analeigh Tipton) are the ones who become distressed.

Right, because of their romantic interests.

Because of the guys.

Girls are only in distress because of the guys?

Well no, the reason we start the set up in the front credits is to list the damsels and then to list why they're distressed.

Right. It's another reason I thought your sophistication had air quotes around it. That self-awareness suggests the characters are in on the joke—or the butt of it. How much are we supposed to feel for them?

Well, you're right, there is a job of work there. I forget that other people will feel that way. To me it feels absolutely natural to have an ironical distance from them intellectually—but not emotionally. So I'm totally with Violet emotionally when she goes through her distress, yet at the same time, I think comically we can appreciate her with some ironical distance. I guess it's a challenge. I don't find it a challenge, truthfully, and I think other people who feel the way that I do don't see it as a challenge, but, okay, it's a challenge for people to react emotionally to characters when there is all this other ironical stuff going on.

In the midst of her troubles we laugh at the things that she says and we laugh at her drama.

Yeah. That worries me actually. When we go from the comedy in the opening to the sad predicament there's a shot of her despairing on her bed and I get very worried when people laugh during that shot.

Because it's not funny. At that point, we're getting into the sad part and I don't know what we did to change tone. There's no bad laughter. That audience reaction is not that terrible because they'll soon get the picture that this is sad. And then we go back and forth in tone. I mean some parts of the depression are funny, like I think the scene with Aubrey Plaza going on about being clinically depressed or not clinically depressed.

Well, I haven't noticed it in the screenings here in Toronto, but I know when we did rough cut screenings, if I got laughs on that shot it worried me. But generally I get worried about all kinds of things throughout the movie and I think even if someone initially thought that was funny and laughed at it, in the subsequent several shots they have seen and felt something else.

Were you at the screening last night?

Well that was kind of a joke.

I've wanted to make this for 12 years. I wanted to make this story for ages and ages. I was doing other things, other scripts and I finally got around to proposing it to the people who financed my other films and it was a good fit. It's a comedy set in the states, more or less present day, and so they said "yes" they wanted to do it. They commissioned it so—I shouldn't have said that, I was just joking around.

No come on, you are allowed to joke. I take you too seriously.