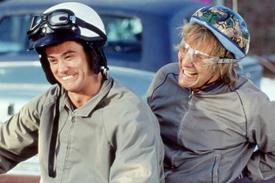 It's surprisingly easy to make a case for the Farrelly brothers as auteurs-filmmakers with a signature style, a particular viewpoint, and an influential effect on successors. Since their 1994 debut Dumb and Dumber, Peter and Bobby Farrelly have created their own brand of gross-out comedy: relentless gags about errant bodily fluids, ill-treated genitalia and masturbus interruptus, loosely connected by a syrupy romance plot and a cheesy inspirational message. The Farrellys' passions extend beyond tittering about poops and boobs (or poops on boobs) to include defiantly politically incorrect jokes about amputees, conjoined twins, the morbidly obese and the mentally handicapped.

For the first half of their writing-directing career, this formula of "slightly brain-damaged manchild protagonist + cursory romance + punch to the nuts + sharts" proved alchemical. In the last ten years, though, Hollywood has moved on. Judd Apatow endowed manchildren with emotional depth, Todd Philips gave a slick sheen to the R-rated comedy, and Will Ferrell and Adam McKay reached new heights of loopiness and eccentricity. The only real company the Farrellys now keep is Adam Sandler, who outdoes them in both insulting audiences' intelligence and collecting piles of money for it. Indeed, the Farrelly brothers have been in steady decline since 2003's superb Stuck On You. They made a trio of gross-out rom coms—a genre without a demographic—and their latest release, The Three Stooges, has suffered poor tracking. Worst of all, they seem to have lost their uncanny knack for finding on-the-verge stars and launching them into superstardom. Let's revisit the Farrellys' films in all their filth and glory, and rank them from dumb to dumbest:

There's Something About Mary (1998)
Summary: A brilliant double-portrait of male longing and male disgustingness, the Farrellys' biggest hit represents them in peak form. Ted (Ben Stiller) has been obsessed with the beautiful, vivacious Mary (Cameron Diaz) since high school. He lost the chance to take her to prom when he zipped his pants into his nads, and when he meets her again as an adult, he gets his junk turned into a doggie chewtoy. Despite her being a harbinger of penile doom, Ted can't get enough of Mary—nor can Ted's creepy friend (Chris Elliot), his private detective (Matt Dillon) or Brett Favre.
Breakout Stars: Cameron Diaz and Ben Stiller
Grade: A

Dumb and Dumber (1994)
Summary: The Farrellian conundrum is to laugh at or to laugh with the brothers' mentally disabled characters, a struggle was introduced and resolved in their debut feature. (Answer: "Do both!") Limo driver Lloyd (Jim Carrey) and his pal Harry (Jeff Daniels) drive across the country to return a briefcase to the beautiful Mary (Lauren Holly), a client Lloyd is smitten with. When they discover that the briefcase contains a fortune—actually, the ransom for Mary's kidnapped husband—they spend all the money in a frenzied shopping spree. Carrey, Daniels and the Farrellys make Harry and Lloyd such funny, good-natured, well-rounded characters that even though the title makes it clear they're mentally handicapped characters, we only half-mock them.
Breakout Star: Jim Carrey
Grade: A-

Stuck On You (2003)
Summary: This vaguely autobiographical film follows two inseparable brothers from a small New England town as they pursue their Hollywood dreams. Conjoined twins Walt and Bob (Greg Kinnear and Matt Damon) relocate to LA to take Walt's budding acting career to the next level, even though Bob's rather shy and being on camera gives him panic attacks. After a rough start, Walt manages to get cast on a nighttime soap where he scores some hotties (the sex scenes are sweet and hilarious). An inspired showbiz satire, Stuck On You also features brilliant extended cameos by Meryl Streep and Cher, but loses major points for racist Asian jokes.
Breakout Star: Eva Mendes, who falls for one-half of the brothers
Grade: A-

Me, Myself, & Irene (2000)
Summary: Comedy nerds of the future will no doubt memorialize Me, Myself, & Irene as the last time Jim Carrey was Jim Carrey, the rubberfaced genius who could make a pratfall the height of wit. (The next year, he tried drama in The Majestic and threw his career off-balance.) The Farrelly brothers gave that Jim Carrey a vehicle to go totally nuts in this road-trip movie about a man with two personalities: Charlie, a dopey, emasculated cop, and Hank, his cruel, lascivious vigilante alter ego. Charlie and Hank escort Irene (Renee Zellweger), a fugitive on the lam for a crime she didn't commit, to safety. Both personalities fall for her, then fight over her, leading to the greatest one-man wrestling match in movie history.
Breakout Star: Remember when people used to like Renee Zellweger?
Grade: B

Kingpin (1996)
Summary: Roy (Woody Harrelson), a former competitive bowler, coaches an Amish idiot/bowling savant (Randy Quaid) to win a national bowling competition and beat Big Ern (Bill Murray), the sleazebag who ended Roy's bowling career by getting his hand chopped off when they were rivals on the amateur circuit. Murray, here in full smarm mode, is a dry delight as always. But the film's true highlight is Claudia (Vanessa Angel), a moll who runs away from her abusive gangster boyfriend and becomes Roy's business partner—she may be the only fully realized female character the Farrellys have ever created.
Breakout Star: Just old pros here
Grade: B-

Fever Pitch (2005)
Summary: A typical Farrellian protagonist—slightly brain-damaged, obsessed with poop, inexplicably attractive to females—is mysteriously transported into a lazy, by-the-numbers rom com about an unambitious manchild and a go-getter lady. The affable Jimmy Fallon is completely miscast as Ben, a nice but insecure teacher by day, and a loud-mouthed, boorish Red Sox superfan by night. Unable to decide whether Ben's Soxmania is a virtue or vice, the film is a confused, thoroughly unromantic mess, saved only by Drew Barrymore's sparkling charm.
Breakout Star: Certainly not Jimmy Fallon
Grade: C+

Outside Providence (1999)
Summary: Based on Peter Farrelly's autobiographical novel about his prep school years (you read that right), this completely ordinary coming-of-age story has "vanity project" written all over it. Dunph (Shawn Hatosy), a teenage screw-up from a small town in Rhode Island, lands in a Connecticut prep school, where the lawns, accents and caricatures are broad. Not even Alec Baldwin's touching performance as Dunph's struggling father redeems this solipsistic bore, and the wheelchair-ridden brother and three-legged dog seem like stock characters from a different Farrelly script.
Breakout Star: None
Grade: C

Hall Pass (2011)
Summary: The Farrelly brothers have always shown a strong conservative streak, ironically never more so than in this adultery-themed comedy. Horny suburban dads Rich (Owen Wilson) and Fred (Jason Sudeikis) get a week-long "hall pass" to cheat on their put-upon wives, but they're too old and out of the game to pull it off (e.g., they go to Applebee's to pick up women). Like the characters, the film talks a big talk, but doesn't have the guts (or the charm) to pull off anything transgressive. In fact, the film is a perfect reflection of the Farrellys at this point in their careers: too concerned with being likable to take any risks.
Breakout Star: Jason Sudeikis, but 2011 was his year anyway
Grade: C-

Shallow Hal (2001)
Summary: Self-loathing fat dude Hal (Jack Black) gets tricked into looking at women as human beings with personalities and feelings. Self-loathing fat chick Rosemary (Gwyneth Paltrow) can't understand why anyone, Hal included, would find her attractive. The sermonizing is unbearable, as is the cast.
Breakout Star: Gwyneth's fat suit, for giving us an early heads-up on what La Goop looks like on the inside
Grade: D

The Heartbreak Kid (2007)
Summary: Ben Stiller tops and bottoms this list, neatly outlining his arc from adorable to unwatchable. Stiller's character Eddie realizes on his honeymoon that his bubbly, sex-freak bride (Malin Akerman) isn't as appealing as the perfectly nice, blank cipher (Michelle Monaghan) he meets in the hotel lobby. Stripped of the Farrellys' signature good-humoredness, The Heartbreak Kid represents the brothers at their worst: mean-spirited, provincial, misogynystic, racist (so many Mexican jokes), and gross for the sake of being gross. Let's hope they return to their sweet, dopey roots in next year's Dumb and Dumber 2.
Breakout Star: No one comes out of this looking good
Grade: F