Jason Segel and Nicholas Stoller Plan Their Own Vow Renewal 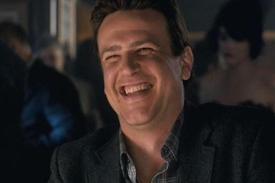 When Jason Segel met Nicholas Stoller in 2001 on the set of Undeclared, he was 20 and Stoller was 25—a little too young to settle down. But five years later, they did, and when they emerged from their writing lair, the result was the script for Forgetting Sarah Marshall: Segel's first starring film role and Stoller's first director gig. Their tag team gave both careers a boost—Segel snatched a lead role in I Love You, Man and Stoller leaped at the chance to shoot the Sarah Marshall sequel Get Him to the Greek—but the pair regrouped to split up writing, directing and starring in The Muppets, and then immediately again in the sweetly realistic romantic comedy The Five-Year Engagement. In it, Segel plays Tom, an up and coming San Francisco chef who puts his career on hold to follow his fiancee Violet (Emily Blunt) as she finishes her Psychology degree in Michigan. The happy couple expects it to be a two-year delay. As you can guess from the title, things get worse. Meanwhile, his moronic friend Alex (Chris Pratt) and her boozehound sister (Alison Brie) couldn't care less about what's practical—and maybe that's their secret. Four years after we saw Segel get dumped for Russell Brand while fully, danglingly nude, what do these now-maturing comics think of love? Segel and Stoller explain—that is, when they're not giddily interrupting each other like two best friends in a creative partnership that deserves its own ceremony.

I've heard you made this movie as a way to move past man-children. On behalf of womankind: Thank you so much.

Jason Segel: I think since Sarah Marshall, Nick has had a child and a wife. And I'm growing up. We just think—

Jason: Big boys! I think we're both moving into different phases of our lives and everything we write will probably coincide with where we are in our lives.

So what do you think you'll be writing about at 65?

Nick: Probably all the people I've murdered. Because at that point, I'll feel guilty enough that it'll be my confession. It'll be called My Confession.

Jason: Who's going to play you?

Nick: You will. You're perfect.

Nick: Of course! If you're willing to.

Jason: Let's see where we are. I can't make a commitment for when I'm 65 to you right now.

Your film-making partnership sounds kind of like a real relationship.

Nick: You hear about a lot of creative partnerships where the people really like to fight. Like every movie Warren Beatty's ever been in, you hear about all the fighting. It results in great work, but we actually don't fight.

What if you made a movie with Warren Beatty? Would you team up and fight against him together—or could he divide you?

Nick: But I'm too scared to. Even though he keeps calling me and being like, "When are we going to work together?"

Do you think most movies tell the wrong story about love?

Nick: I think most movies don't tell a story about love. Most romantic comedies aren't particularly romantic—they don't try to do anything real.

Jason: And I think there's a lot of different versions of love, as well. Lars and the Real Girl is one of the best love stories I've ever seen—and I'm not being facetious. I love that movie, I think it's one of the most beautiful love stories. Our movie, what we tried to do about this version of love is show an incredibly realistic version of a couple trying to figure it out. Including the grit of it all. And not have it be perfectly—

Jason: The true grit. How to be sloppy and complicated like that stage of a relationship is.

And then having to ride out and avenge your father's death.

Nick: We should have done that. It would have been good.

Jason: Audrey on a horse.

Nick: She loses an arm.

Do you think in every relationship, one person has to sacrifice more than the other, like Tom does here?

I've always thought that guys in particular liked to feel like they were sacrificing—it's a physical way to measure their feelings.

In unison: That's the martyr complex.

Jason: It's also a very adolescent version of love, that drama somehow means intensity. That martyring yourself is what you should do, but secretly even though you're saying it's a selfless act, it's a completely selfish act because you want the reward of having done it. I think those are fallacies—fallacies of the immature man. Of which we are no longer.

[Jason and Nick laugh for a full 20 seconds.]

Nick: We should tell a story about a manly man turning back into a man-child.

Nick: It should be like, "The problem with you is you're too manly. You have your s--t together." And then he becomes a slob and starts to smoke pot.

You know who you should cast for that: Warren Beatty.

For Violet, Tom leaves San Francisco and moves to Michigan, where he's completely miserable. How have the people of Michigan reacted to your depiction of Michigan as a frozen hellhole?

Nick: I probably am alone in this, but I feel like we tried to portray that it's really Tom's perspective of Michigan versus Michigan itself. We cut to him and he's slipping on ice and having a nightmare day, and then we see Violet walking through this beautiful campus and she's having a great time.

So it's all in his head?

Nick: It's the Rashomon effect.

Jason: And she has lines where she's trying to snap him out of it: "You work at a great place!" It's Tom giving in to feeling miserable. They could have been anywhere—they could have been in Honolulu—and if he didn't find a job and he felt like he had no identity, he would have found a reason to be depressed.

Nick: Why didn't we shoot this in Honolulu?

Jason: That's what I said the whole time! You were like, "It totally doesn't work for the plot." "Well, you don't get the metaphor!" And that was our only fight.

When you guys write together, how do you keep from having fun and getting distracted? How does it not take you eight years to finish a script?

Nick: We're really focused. When we get together, we don't really procrastinate.

Nick: Both of us like to either work or not work. I've been in writers rooms-I was a TV writer first—and it's just the worst feeling to be sitting in that room and people are just f--king around and not getting anything done. I like to go home and be with my wife and kid.

Jason: Nick has a family and a ton of other stuff that he's writing at any given time. I have a TV show and usually two other movies I'm working on, and press to do for a third. We don't have the luxury of screwing around.

Nick: It's nice to just work and then stop working and have a drink.

You were writing this movie as you were working on The Muppets. Did any ideas you had for one influence the other?

Jason: Puns bled over. That's exactly what happened. To write Muppets, there's a lot of punnery going on. It's like exercise: your brain goes into Pun Mode and it's very sharp and there were a few too many puns in our first draft of this.

Nick: The toe puns that Chris Pratt does, there were probably four times as many of those that we shot. To the point that Chris Pratt, who is the most unfailingly polite person and greatest guy on earth, he got a new draft of the script and said, "Wow! My character really says a lot of puns now." That was the closest he came to criticizing any part of the script. "Huh, Alex is really into puns!"

His character, Alex, doesn't strike me as someone into sophisticated word play.

Jason: Alex is smarter than he looks. What's interesting about those two side characters [Chris Pratt and Alison Brie] is that at first you think they're the dummies.

Well, his whole pretending a carrot is a wiener doesn't help.

Nick: They rise to the occasion.

Jason: Chris Pratt gives me that speech where he is very well-spoken and very adult. He says the meanest thing in the whole movie: "I'm glad you're not a father because you'd be a terrible father." That line slaughters me every time I watch the movie.

Nick: He improved that, too. I was like, "Just lay into him, be as harsh as possible." When he said that, it was intense.

Jason: And the first time he said it, we weren't rolling. We weren't even on set. We were at dinner and I said, as Jason Segel, "I'd like to have kids someday." And then he said, "I'm glad you're not a father—you'd be a terrible father."

Nick: I introduced him to my daughter and he was like, "I can't believe you're a father—I think you're a terrible father." It was weird. Maybe he was rehearsing.

I'm sure a lot of engaged couples are going to see this. What do you think they'll be talking about on their car ride home together afterward?

Jason: That they should get married. That they should step on it. And they're going to get home and be like, "You know what, baby? We're never going to be like that couple. I love you." And then they start kissing.

Jason: And she laughs, because it's a little ticklish.

Nick: And then he unbuttons her shirt with his teeth.

Jason: These are the things we can promise if couples go see The Five Year Engagement. We're putting that on the poster.

Nick: But after test screenings, you heard couples having strained conversations.

Jason: Did you really?

Nick: Oh yeah! As they were leaving, people were having slightly more intense conversations. During the all-night fight scene where she goes, "Why don't you talk about things?!" we heard some women clap. And then when he says, "Because that's not what guys do—we don't sit around talking about stuff!" there was a guy sitting two rows behind me who went, "Amen, brother!" I was just like, I think we've done our work here.

Jason: He told me that story, and I'm still convinced the guy was saying, "Allman Brothers."

Harsh soundtrack criticism, right in the middle of your movie.

Jason: I can very confidentially say that I've been inspired by the wedding at the end of our movie. I don't need to choose everything there, but I think a small wedding with our two families and our friends in a public park is a beautiful, beautiful way to get married. It's cheaper, too.

Nick: That's the thing: it's a good deal. You don't expect catering.

Nick: Hopefully just near one so you don't have to actually rent a cart.

Nick: I don't believe in vow renewals. I think they're dumb. I'm going to be harsh about it. When you get married, that's it.

Jason: Right, 'cause you made the vow. You don't need to renew it. That's the point of a vow.

Nick: But having said that, I'd say—

Jason: In a park. With just our families.

Nick: Piggybacking on Jason's, so we can split the decoration fee.

Maybe you guys should have a writing partnership vow renewal.

Jason: We should have a ceremony as a joke.

Jason: That's a good reason for a party. But I'm super-busy—Nick, do you mind writing my vows?