Memo To Guy Pearce: Learn From Other Actors Who Switched To Action Films 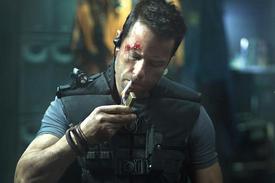 Guy Pearce is one of the best actors of his generation. Having escaped the ghetto of Australian soap operas, his career took off as an annoying young drag queen in Priscilla, Queen of the Desert. Soon after, he quickly established himself as an actor with tremendous range: a naive 1950s cop in LA Confidential, a revenge-obsessed amnesiac in Christopher Nolan's Memento, a cartoony villain in The Count of Monte Cristo, and even a deported Irish convict forced to murder his own brother in 1880s Australia in The Proposition. Even his middling, supporting roles like King Edward VIII in The King's Speech or Sergeant Matt Thompson in The Hurt Locker are amazing. And yet, he's never been able to seal the deal as a box office draw.

His few attempts at carrying giant blockbusters haven't worked, most notably the troubled 2002 version of The Time Machine, which sucked—a lot—and flopped. An actor of his ability and filmography ought to be at least as big a name as Russell Crowe, and yet he is still firmly in the "Who?" camp for people who aren't film nerds. Which is why he's decided to try his hand at a big budget action/sci fi film in Lockout. But will cinematic ass kicking help his career? It's a big gamble, and he'd be wise to look carefully at the example of other actors who tried to make the switch from acting skills to action kills. But, he's probably busy, so I've taken the liberty of doing it for him. Here are three actors who jumped from drama to action, and what Guy needs to learn from them if he wants to buff up and charge ahead with his career intact.

Remember Ray Liotta? Of course you do, because he was awesome in Goodfellas. In his take on unrepentant gangster Henry Hill, Liotta manages to hold his own against Joe Pesci and Robert De Niro's hammiest performances. It should have made him an enduring movie star. Unfortunately, Liotta didn't graduate to the same ranks as his glittery costars. After Goodfellas, he starred in two awful movies-Unlawful Entry and Article 99-and developed a reputation for bad decisions and hack roles. So for his third post-Goodfellas film, he chose a different route.

No Escape can best be described as Lord of The Flies meets the Attica riot: a bunch of prisoners trying to kill each other while protesting a bad prison. I've seen this limp movie three times and I still can't remember anything other than the final scene. And that's a shame, because it's directed by Martin Campbell, who later went on to direct the only two good James Bond movies made in the last 20 years, Goldeneye and Casino Royale.

Did It Work: Sadly no. Created on a budget of $28 million, it barely made $15 million in theaters. Liotta's career wasn't dealt a fatal blow, but his leading man days were over. He has since had supporting roles in middling films, often riffing on the hard boiled persona he perfected in Goodfellas. His best-known post-Goodfellas role might be the voice of Tommy Vercetti in Grand Theft Auto: Vice City. That game is awesome, and he is awesome in it, but it isn't the outcome he expected.

Similarity to Lockout: Duh, it takes place in a future prison. Don't make me shiv you.

What Guy Can Learn from Ray: Future prisons aren't bad, but it's probably best to wait until your career is very well established before visiting them. But if you must take the job, better make sure you do it after the director has made Daniel Craig the best Bond ever.

Thanks to Christopher Nolan's Batman series taking all the money in the world, Christian Bale is now a major movie star. But before, he was largely known for having made the transition from child actor to adult. He broke out as the lead in Steven Spielberg's Empire of the Sun back in 1987, and as a young man played a series of eye candy roles in girly films like Little Women, Newsies and Swing Kids. It was 1998's Velvet Goldmine and 2000's excellent American Psycho that firmly established him as uncompromising and dedicated actor (who also kind of skeeves us out). But despite a well of talent and good decision-making skills, Bale couldn't really deliver the money studios need. So he tried the time-tested strategy of taking a huge paycheck by trying out the action movie thing-twice.

The Films: Reign of Fire and Equilibrium (both 2002)

Reign of Fire should have been the greatest movie ever. Dragons! England! Er, dragons! Alas, Matthew McConaughey's country ham overwhelmed Bale's British Method style, but at least he got the practice he needed looking pensive, a skill he'd put to good use as Batman. Similarly, Equilibrium could have been great. Written and directed by The Thomas Crown Affair remake's Kurt Wimmer, it should have been a smart, well constructed sci-fi actioner. Instead, it was an extended riff on Prozac and bullet dodging. Oh well.

Similarity to Lockout: Reign of Fire has Matthew McConaughey riding a dragon, which is kind of like sending Guy Pearce into space.

Did it work: Hell yes. Sure, both films flopped, but Bale himself didn't suck. He also kept himself from being seen as a cheesy action guy by immediately starring in 2004's The Machinist, for which he famously starved himself down to 120 lbs. The craziness of that prep overshadowed the two previous flops, and he proved he could at least handle the rigors of Hollywood. I'm not saying a willingness to drop down to an almost life-threatening weight guarantees you'll end up as the next Batman, but it isn't like there's no supporting evidence.

What Guy Can Learn from Christian: Make certain to follow up Lockout with something really difficult and creepy. Perhaps a film in which he's forced to remove one of his own eyes.

Liam Neeson started out as Gawain in Excalibur. His earliest roles were in a string of pretty awesome, but schlocky fantasy movies like Krull, and he rose to fame in the post-Batman super hero film Darkman. Once fully established, Liam decided he didn't want to get pigeonholed as a genre-stuck character actor and pursued a varied list of dramatic roles that ranged in quality from silly (Nell) to awesome (everything else). He was even able to bring a gravitas to Star Wars: The Phantom Menace, one of the few good things about that terrible film. In the decade, Liam worked constantly, but we saw him as often as not playing dads (Love, Actually), mentors (Batman Begins) and sometimes both (Kingdom of Heaven). Too young to be put to pasture, he decided to try his hand in an action movie for the first time in 18 years.

Taken is brilliantly silly. Overly sentimental and perfectly stupid, it's essentially non-stop ass-kicking as Liam Neeson menaces his way through the streets of Paris looking for his kidnapped daughter. The film seems deliberately structured like a video game, with Liam fighting increasingly tougher enemies and levels until the final boss battle in which he saves said daughter while dispatching the bad guys with deadly precision. Never mind that he went on a murder spree in a foreign country-the film ends as all action movies should, with no consequences for the hero's actions save gratitude. (Just try not to remember his daughter's friend who died before he could save her.)

Did It Work: Yes. Taken pulled down $225 million in worldwide grosses and will have Neeson reprising his role in the upcoming sequel. In the interim, he's morphed into an action movie stalwart, appearing in both Clash and Wrath of the Titans, Battleship, The A-Team, and Unknown without once tarnishing his career. These might not be great movies, but the 59-year-old Neeson has escaped the perils of being seen as a grandpa or geek.

Similarity to Lockout: Luc Besson. Taken was produced and written by Besson, who also wrote Lockout.

What Guy Can Learn from Liam: When in doubt, say yes to Luc Besson. Besson knows how to turn dramatic actors into convincing action movies, and even if Lockout ends up being a hackneyed mess, it will almost certainly be an awesome hackneyed mess. We look forward to seeing him reprise the role in Lockout 2: Lockout from Los Angeles in 2016.