Say it ain't so, Sam: The rise and fall—and future perils—of being a hot male ingenue 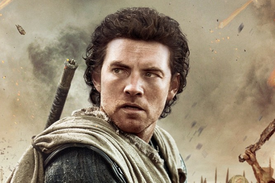 Three years ago, Hollywood began touting Sam Worthington as "the next big thing." He had starring roles in two of the most high profile projects of 2009: Terminator Salvation and a little film called Avatar. A young, unknown Australian actor couldn't have asked for a better start to their career.

But despite Worthington's early buzz—the hum of which even drowned out his Terminator co-star Christian Bale, fresh off the mega-success of The Dark Knight—Salvation was a box office flop, and the critics didn't like it either. Scoring a disappointing 33 percent on Rotten Tomatoes that summer, less than half of the Rise of the Machines, the series' previous low, Salvation's $371 million global gross on a $245 million budget proved just how hard it is to make a successful Terminator film without James Cameron and Arnold Schwarzenegger.

But luckily for Worthington, he did have Cameron. Seven months later, Avatar was released and we all know what happened next. $2.78 billion later, Worthington had a priceless entry on his acting resume as the leading man in James Cameron's highest-grossing movie in history. The last actor who had that credit: Leonardo DiCaprio.

With Terminator Salvation farther and farther behind him, Worthington's exposure from Avatar (plus the audience's newfound enthusiasm for 3D) helped play a role in the successful $61 million domestic opening weekend of Clash of the Titans. Worthington scored his second straight hit and Clash went on to bank $493 million—2.8 times its $175 million budget. But the critics still weren't onboard the Worthington express.

His streak was short-lived. Worthington took a break from blockbusters and landed a role in Focus Features' The Debt, which received fairly positive word of mouth from American audiences and a solid 76% score on Rotten Tomatoes. However, the overseas performance of that film wasn't enough to pick up the slack and it barely made back its $37 million budget with a $45.6 million global haul.

Flash forward to this year: two months ago, Worthington starred in Summit's thriller Man on a Ledge. Marketed fairly heavily for a January release and supported by an advance screening campaign across the country, the movie still opened to just $8 million and its low worldwide gross put a noticeable dent in Worthington's star power.

Which leads us to now: Wrath of the Titans, Worthington's first sequel, just wrapped up a $33.5 million opening weekend in the U.S.—down 45% from its predecessor's opening. The mediocre response to the first film certainly played a large role in the lack of interest for the sequel, as well as the backlash toward 3D and the current popularity of The Hunger Games. Wrath has little chance of reaching even $90 million domestically and is projected to gross approximately $275 million worldwide. Not only is that a significant drop from the first film, but with an even higher budget this time around ($195 million) it means that Wrath of the Titans won't make enough profit to have been worth the bother.

Of Worthington's seven major films so far, only two have generated positive reviews from critics and only two have turned a profit for their studios. For a man who was suddenly thrust into the industry spotlight three years ago, his track record hasn't come close to meeting expectations. Let's admit it: no one bought a ticket to Avatar for Sam Worthington. With more duds than hits on his resume, Worthington is now at risk of being deemed box office poison. The question for Hollywood is: do they need to stop piling on the bandwagon for an untested actor? And the question for Worthington is: does he need to reject the next big paycheck in favor of investing big time career?