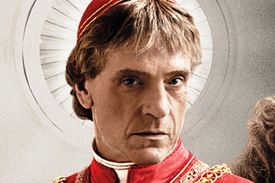 We Have a Pope is a new Italian comedy about a runaway pontiff. Although the film depicts the reluctant pope seeing a shrink while cardinals play volleyball in full vestments, the most noteworthy thing about We Have a Pope isn't its modern take on the papacy, but the fact that there's a new movie about the pope at all. Films about His Holiness grace us almost as rarely as does a new pope, which is unfortunate. Between popedom's sky-high hats, flowing robes, wrinkled faces and vividly colored costumes, few institutions are as readily cinematic as the Holy See. Here are the six best films—comedies, mysteries, dramas, and, okay, one sex-drenched soap—about the pope:

The Pope Must Die (1991)
The English have a centuries-long tradition of looking down at Catholics and Italians (and everyone else) and The Pope Must Die is a perfect example. Released in the U.S. as The Pope Must Diet—a kinder, gentler tweak of the controversial original title—this broad British farce about a pumpkin-sized bumpkin who is accidentally promoted from rural priest to Pope Dave is full of Eye-talian stereotypes. Though initially baffled by his sudden promotion, the new Holy Father (Robbie Coltrane—picture the lovechild of Rowan Atkinson and Bobby Bacala from The Sopranos) is happy to play along, spending his free time doing aerobics to tunes like, "Matthew, Mark, Luke and John/Work that fat until it's gone," while gossipy cardinals whisper about him on their cross-shaped cell phones. But when Pope Dave learns that the Vatican's great wealth is funded by the mob's drug deals, weapons sales and money laundering, Mafia don (The Godfather actor Alex Rocco) puts out a hit on him and prepares to seize the papal throne for himself.

The Order (2003)
There have always been conspiracy theorists that ramble and fume about this pope or that pope being the Antichrist—an expression of the exaggerated but legitimate fear of the Vatican's intimate reach into the lives of billions of people around the world. In this supernatural mystery, Heath Ledger plays Alex, a disillusioned priest who discovers that the next pontiff-to-be (Peter Weller), named the Black Pope, is in pursuit of a power that will magically erase a dying person's sins and send them straight to heaven. Like the Catholics of yore, the Black Pope intends to use his backstage passes to paradise to get crazy rich by offering his services to the wicked and wealthy. The Order's critique of indulgences is lukewarm and delivered 500 years too late (plus Martin Luther did it better), but it does play with the surprisingly enduring notion that the Catholic Church is Hogwarts for grown-ups: full of magic spells, arcane technicalities and virgins.

Pope Joan (2009)
In the 1200s, a legend appeared in Western Europe of a lady-pope who rose among the Church's ranks to become the Holy Father, only to be revealed as a woman after giving birth on horseback during an Easter procession. The legend of Pope Joan was most likely an anti-Catholic slur, but this German biopic fashions a feminist fable from the medieval myth. The daughter of a priest and his pagan wife, Joan (played by the androgynous Johanna Wokalek) succeeds in reading the Bible and learning about medicine in spite of her father's violent disapproval. As a teenager, she runs away from home and disguises herself in men's clothing to continue her education and protect herself from sexual attacks. After joining the monkhood, Joan is chosen to counsel and attend to the ailing Pope Sergius (John Goodman in a very fancy muumuu). After Sergius' death, Joan rises to the papal throne, but continues her dalliances with her married lover while striving to elevate the status of women. She can do anything—right, Archbishop Barbie?!

The Borgias (2011-)
There has always been a proliferation of unchaste priests, and some of those carnal clergymen have risen up the Church hierarchy to become unchaste popes. The pontiff most infamous for his many mistresses, illegitimate children, and penchant for orgies is Pope Alexander VI, played by Jeremy Irons on the Showtime historical soap The Borgias. The slithery Irons, who's built a career on playing sexual deviants, is brilliantly typecast as the politically shrewd, family-oriented, cartoonishly sinful holy man whose depravities would make Silvio Berlusconi blush. Alexander celebrates his ascent to the papal throne in 1492 (note the year) with some S&M play: a naked prostitute pleads, "Whip me, my lord!" while the unimpressed pontiff looks on and thinks, "This again?" Alexander thrives in the midst of scheme-hatchery, especially for the benefit of his children. To one of them, he advises, without irony, "You are my eldest son. It is your destiny to follow in my [priestly, then papal] footsteps."

Gone with the Pope (2010)
The harshest criticism of the Vatican on this list comes from Gone with the Pope, a Popesploitation flick shot in the '70s and edited in the 2000s. Small-time mobster Paulie (Duke Mitchell) and his three friends kidnap the pope and hold him for a ransom of "a dollar from every Catholic in the world." The kidnappers are unrepentant racists who kill for money, gang-rape a 400-pound woman, and exploit the religious convictions of billions for their own gain, but the film implies that none of those individual acts are as heinous as the Vatican's institutional indifference to and inaction during the Holocaust. Fittingly, the flinty-eyed pope (Lorenzo Dardado) is a master manipulator who quickly converts Paulie's three numbskull friends to the Church—not by appealing to their sense of ethics or honor, but by preying on their fears. The gang then decides to let the Holy Father go, but only if he doesn't snitch on them, or Paulie's "gonna murder 300 fucking priests, not just to avenge [his] friends but also the Jews." As should be expected, the pope does not keep up his end of the deal and lots of people end up dead.

The Pope's Toilet (2007)
Almost half of the world's Catholics live in Latin America—a demographic fact that has yielded many calls for a Latin American pope. But the popularity of Catholicism in Latin America has also led some to criticize the Church for doing little to, say, alleviate poverty or promote health in that region. (Actually, the papacy didn't even bother to visit Latin America until 1968, despite launching a vigorous conversion campaign in 1492.) Based on a real-life visit by El Papa John Paul II in 1988, the Uruguayan tragicomedy The Pope's Toilet takes place in Melo, an impoverished town by the Brazilian border that has no plumbing. While his neighbors are borrowing money to buy food to sell to the Brazilian tourists in town for the pope's visit, Beto (César Charlone—picture Bryan Cranston with a mariachi moustache) anticipates how and when all that food will, uh, come out. Using his daughter's college fund, he builds a state-of-the-art latrine he'll charge tourists to use. But Juan Pablo II (making a cameo via news footage) only plans to stop in Melo for a posing-with-the-poor photo-op before quickly returning to the sanctum of his Popemobile. When only a few tourists bother to show up, the already impoverished people of Melo are left more financially and spiritually destitute than ever.

Tags: The Pope's Toilet, Gone with the Pope, The Borgias, Pope Joan, The Order, The Pope Must Die
Print