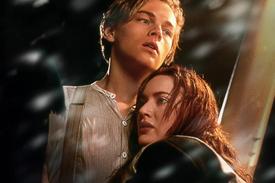 It was the biggest ship—and the biggest film—in history, at least until Avatar's blue aliens conquered earth. Now, on the 100th anniversary of its sinking, Titanic sails again in 3D. This isn't Titanic's maiden voyage, but it's guaranteed to be one of April's biggest box office hits. Boxoffice asks producer Jon Landau what convinced him and James Cameron to spend another year aboard the ship, why he resisted rejiggering the movie like George Lucas' endless Star Wars updates, what's on tap for Avatar's two sequels and the true story of that time during the filming of Titanic when the crew got dosed with PCP.

How many weeks do you think you've spent on Titanic altogether between the original film and the 3D remastering?

Wow. Starting in 1994 and then up until now—over four years?

Do you have the entire film memorized?

Pretty close. This process, we've taken 60 weeks to convert the movie to 3D. We've done it on a frame-by-frame basis—Jim has been very involved in the process—and we believe that what we're going to present isn't a re-release but a new movie, and that people will see it as such when they go to the movies.

When they showed some early footage this year on the Paramount lot, I could hear people crying all around me, but their tears were hidden by the 3D glasses. A secondary bonus.

I think that everything is enhanced by 3D. If a movie is emotional, it's more emotional in 3D—it completely enhances the dramatics. Not just the action, which I think is a misconception people have.

Is there a scene in Titanic that still manages to affect you?

It's funny. Watching the film recently, what struck me—and this goes back to what 3D does, it enhances the performances—what got me emotionally this time is when you come out of the frigid waters of the Atlantic and back to old Rose and Bill Paxton and his gang are listening to her. She's talking about waiting for a salvation that was never going to come. That really got me the last time I watched it.

Watching it again myself, it also seems made for 3D—like that shot when Jack and Rose are on the top of the ship watching it go down.

Jim shot it very wide-angled with longer shots, not a lot of fast-cutting. It really lent itself to the conversion.

I was also struck by the those scenes of Kate Winslet running up and down the watery halls—in 3D, the hallways seem endless.

In those situations, you get a greater sense of the ship itself. What 3D does for an audience in the case of Titanic is it puts them on the ship!

What's a 3D shot that you did in Titanic that really drew on the skills you learned making Avatar?

All of them. It's a learning process. I think we learned on Avatar that in a fast-cutting sequence, you go with less 3D and not more 3D because you don't have time to take in the 3D. We learned how to focus and hone in on where people are looking and make that the comfortable viewing so that there's no eye strain when you're watching the movie. It's an accumulation of things.

Did you have to fight the temptation to change anything about the original that always bothered you?

It wasn't so much about changing as it was about wanting to update a visual effects shot. Do we want to do this, do we want to do that? Once we made the decision early on that we were going to tie our hands behind our backs, we didn't look back. We made that decision for the moviegoer, for the audience, so that they weren't in the theater looking and trying to find what was changed and what was different—they could just get immersed in the story.

Technically, what was the hardest shot to convert to 3D?

How do you handle the pressure of working on films that Hollywood looks towards to set a new standard?

You know, if a movie did not come without a challenge, I don't know that we would want to do it. We like pushing ourselves because that's what gets us excited. We're not the most prolific company, but we find movies that fuel a flame of passion. And when you feel passionate about something, you want to push it and push yourself, and that's one of the exciting things.

James Cameron is a filmmaker of unlimited ambition. How much of your partnership is you reeling him in and how much is you figuring out how to make his goals happen?

He's realistic. But if together we didn't push the bar and push people beyond where they thought they could go, we would never be able to make our movies. There were times on Avatar when we had to stop and name things because it was the first time they were ever being done and if you wanted to repeat them, they had to have a name. Then there were times when we'd say, "Okay, what we thought would work isn't working this way—let's find an alternative." And that's also part of the challenge: you can't be so stubborn-minded to say that this is the only way to do something.

You're promoting the film by reaching out to the Titanic community and timing the film to the 100th anniversary. What sorts of outreach are you putting together?

We're approaching this like a big release, so just like you do on any movie, we're taking part in any promotional opportunity that's a good fit. Right now, there's so much that's going around about the Titanic—the RMS Titanic is doing stuff, the Titanic Society is doing stuff—so we're trying to do whatever things we can that are mutually beneficial.

What help are you getting from Leonardo DiCaprio and Kate Winslet? They've both been quoted as saying it was hard for them to see themselves so young—and in 3D.

Is it true that during the filming of Titanic, a disgruntled crew member put PCP in the soup?

We do not know who the person was. Somebody put PCP in the soup when we were up in Halifax—in the chowder, it was a seafood chowder.

A lot of people got very sick. We took about 57 people to the emergency room at the hospital.

Are there plans to make 3D re-releases of any of Cameron's other movies-say, the Terminator series?

Right now, we're just going to get through this and focus on the next two Avatars. When those are done, anything is possible.

What's it like to be working on the sequels to the most successful movie of all time? It's a lot to live up to.

You know what? We put more pressure on ourselves than people do on the outside. We approach every movie with the same determination and focus. Whether it's an Avatar sequel or a smaller movie, we have to create what we believe is a good movie—a great movie. And we can't worry about what's come before, we just have to focus on the project that's in front of us.

The way Avatar was structured, the ending didn't beg for a sequel. It felt complete. With that as your starting point, what stories are you thinking of for the second and third Avatar sequels?

Each of the two movies has to stand alone as a movie. When you look at the three of them together, there's a continuing arc that you realize. And Jim has successfully done this—when Jim did the first Terminator, he already had Terminator 2 in his mind, but you didn't feel like it was a set-up for a sequel.

You're famous for your poker skills. What do poker and producing have in common?