Who’s The Weirdest Of Them All?: The Six Strangest Snow Whites 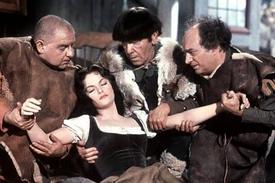 For several months, film journalists and box office observers have been staging a virtual catfight between Mirror Mirror—director Tarsem's light-hearted version of the Snow White tale—and the dark action-adventure Snow White and the Huntsman starring Kristen Stewart and Charlize Theron, due in June. The two films share more than a narrative source; both strive to escape the long shadow of the iconic 1937 film Snow White and the Seven Dwarves—Walt Disney's first feature-length film—which defined the fairy tale as a conflict between a virginal, rosy-cheeked maiden and her homicidally jealous stepmother for generations. But Mirror Mirror and The Huntsman are just two of the many Snow White films unburdening themselves of Disney's morally simplistic, regressively anti-feminist legacy, which preaches feminine passivity ("Someday my prince will come") and doles out obsolete dating advice ("Don't date a man shorter than you"). In anticipation of Mirror Mirror and The Huntsman, here are six other Snow White tales that break Disney's spell and forge their own happy endings:

Snow White: A Tale of Terror (1997)
"The fairy tale is over," proclaims this TV movie starring Sigourney Weaver and '90s teen queen Monica Keena. With an overripe plot strewn with incest, suicide, miscarriage, attempted rape and cannibalism, A Tale of Terror is a Gothic family melodrama somewhere between a William Faulkner novel and a Jerry Springer episode. The movie divides its attention between the increasingly unhinged Queen Claudia (Weaver), who blames her stepdaughter Lily (Keena) for the miscarriage of her would-be son, and Lily's drippy romance with one of the seven outlaws she befriends after running away from home. A Tale of Terror is a lurid but touching exploration of how the characters pathologically cling to absent family members (for Lily, her dead mother; for Claudia, her stillborn son). But the best reason to watch A Tale of Terror is Weaver's recreation of the scene in Ghostbusters where she seduces Bill Murray (here, an insipid Sam Neill) while zonked out of her evil mind.

Betty Boop as "Snow White" (1933)*
This black-and-white, pre-Disney, absurdist masterpiece encases Betty Boop in a block of ice, turns the queen into a dragon, and features a heartbreaking, nearly two-minute blues performance by a dead clown (sung by Cab Calloway), all in a seven-minute short. The sexy, squeaky-voiced Betty flees the decidedly unattractive queen, who is told bluntly by her mirror, "If I were you, I'd hide my face." After a series of blink-and-you-miss-it adventures, Betty's boyfriend Bimbo (heh) slays the queen in dragon form, though no post-battle make-out follows since Bimbo's a dog. This "Snow White" is a freewheeling, feverishly paced comedy sketch that crams in as many sight gags as possible into the frame while eschewing traditional storyboarding and dull pedantry.

Snow White and the Three Stooges (1961)
Moe, Larry, and Curly's only Technicolor film is an ice-skating musical(!) starring Olympic gold medalist figure skater Carol Heiss. The Three Stooges and their adopted son Quatro (Edson Stroll) find Snow White (Heiss) slumbering in the seven dwarves' summer cottage, Goldilocks-style (the two groups of asexual men are friends). Quatro (named after Curly's razor?) falls in love with Snow White while the Stooges direct their slaps and flying pies at their enemies, reveling in rare heroic form. As is nearly always the case, though, the only character who seems any fun is the queen regent (Patricia Medina), who wears all the fab clothes in the movie and seems more interested in strengthening her hold on the crown as a commoner without royal bloodlines-how 99%-than besting Snow White in a beauty pageant.

Snow White: The Sequel (2007)
British actor Stephen Fry narrates this X-rated Belgian/French cartoon, a satire of the Disney characters' sexual naïveté. Like The Three Stooges, The Sequel shifts the focus to the men of the fairy tale-in this case, the deeply confused Prince Charming, who wonders why he is so irresistibly attracted to "dead or sleeping" princesses throughout the kingdom (one should be wary of one's necrophiliac impulses). He sends Snow White to live with the dwarves while he deals with his issues, which include his relationships with Sleeping Beauty, Cinderella, and the sexually predatory Good Fairy. On the other side of the forest, Snow White is a cock block in human form—so erotically clueless she has no idea she's giving every dwarf, monster, and wood creature a severe case of the blue balls. This is the one to watch if you want to see animated princesses' cartoon boobies (you know who you are).

Sydney White (2007)
In this modern update, Amanda Bynes takes Snow White to college and explores the democratic impulses latent in the fairy tale. The beauty contest between tomboy Sydney White (Bynes) and sorority queen Rachel Witchburn (Sara Paxton) isn't judged by one mirror's male gaze, but that of the whole campus via HotOrNot.com (remember that awful thing?), which Rachel checks obsessively. After being thrown out of her sorority by Rachel, Sydney shacks up with "seven dorks" in a ramshackle house and runs against Rachel for Student Body President. In retaliation, Rachel "poisons" Sydney's Apple computer by introducing a virus, but the winsome brunette's egalitarian "We're all dorks—let's stand up to the mean girls" message carries the day.

"Coal Black and de Sebben Dwarfs" (1943)
This controversial Merrie Melodies cartoon "Coal Black and de Sebben Dwarfs" asks the great-in-theory question: "What if everyone in this story were black?" The answer, in this case, is a mix of jazz tunes, racist iconography, and World War II-era jingoism. The Evil Queen is a ration-hoarder (her castle is full of rubber, sugar and gin) who hires out Murder, Inc. ("We rub out anybody $1.00, Midgets 1/2 price, Japs Free") to snuff out her rival for the flashy, zoot-suited Prince Chawmin's affections, So White. But the queen's hatred is in vain, because the flirty So White is less interested in the useless, unpatriotic Prince than one of the seven short servicemen who knocks out the ration-hoarder and revives So White with a kiss so powerful it shoots her pigtails into the air and turns them into American flags.

* Until the early 1960s, many theaters played animated shorts before the feature film (oh, to return to the halcyon days when one could watch a Bugs Bunny cartoon instead of a series of brain-numbing, ear-deafening, music-ruining advertisements before the movie). Thus, audiences of the 1930s and 1940s might have seen Betty Boop's "Snow White" and "Coal Black and de Sebben Dwarfs" open for headliners Cary Grant and Irene Dunne, or maybe even Disney's Snow White itself.