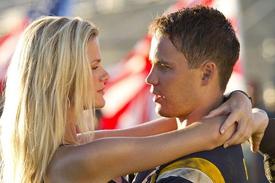 You've heard this story before: a gorgeous girl moves to New York City and strikes it big as a model. Music videos, advertisements, Cosmopolitan, and then the kicker: six straight years in the Sports Illustrated Swimsuit Issue and even a career-making shot on the cover in 2010. But where Brooklyn Decker's story takes a turn is that even at 22, she knew she wanted more. That year, just after marrying her tennis pro husband Andy Roddick, she parlayed her new fame into a guest appearance on three sitcoms. Sure, she played a bikini model, but she knew it was her start. Two years later, she had her first big role as Adam Sandler's girlfriend in Just Go With It, and this summer, Brooklyn Decker is proving she's here for the long haul with two very different roles in two very different films: the alien action adventure Battleship, and the quirky romantic comedy What to Expect When You're Expecting. At an age when most models are still squabbling over the next lipstick supermodel gig, Decker is determined to show the industry she's a beauty with staying power and a serious work ethic—and that she really is a girl who would grab a gun and fight an alien invasion.

Peter Berg really wanted to make sure you could handle the physicality of the movie. What was your audition like?

I auditioned for the movie four times before I even got to meet Pete. In my last audition with him, he said to me, "If you want this part, I want to see snot bubbles coming from your nose. You're freaking out, there's aliens attacking your boyfriend—I want you crying, I want snot coming from your nose, and if you can do all that, you get the movie." I was like, "Okay, I've got to do this." And I don't know what came over me but snot was dripping from my nose, tears were coming from my eyes, I was screaming, he had his hand over my mouth, it was very chaotic. And then by the end of it, he was like, "Cool, thanks. See you soon." I was like, "Okay...?" Three weeks later, he called and offered me the part. Somehow, the snot bubbles are what got me on Battleship.

That seems like it'd be harder to do than it sounds—you're fighting natural human vanity.

I know! I feel like I'm a new actor. The whole emotional, crying, freaking-out thing is new to me and something that I have to work on. I don't know if it's because I had auditioned so many times, but I was just like, "Screw it—I have to go for it." Plus, we're shooting in Hawaii. We're shooting with guns and doing a lot of stunts, shooting long days. It's incredible, but it's definitely hard work. I think he needed a team player who wasn't going to have to go to her trailer every five minutes. He wanted somebody who could get beat up a little bit, and I think somehow snot bubbles proved I could do all that.

You were an athlete all through high school. How physical did the shoot get?

We were shooting in the mountains, first of all, so there was a lot of hiking. Surprisingly, the conditions got a little tricky with mudslides and rainstorms. You were outside and quite literally in the trenches all day. I love hiking, I love kayaking, so it felt very natural for me to be in that kind of environment. That part didn't feel like a stretch. But the part where I really had to train was the gun training, the car stunt training, all of the physical acting and training that it makes to make something like that work in a scene. And my character is a physical therapist, so I had to learn a lot about therapy, specifically for people who had lost limbs.

Is it true that Peter hid in the bushes and fired a machine gun just to frighten you?

Yup, it is. One of the things I love most about Pete is he's an actor's director. He will do anything it takes to get an emotion from an actor, and he knew that I was new, so he would constantly do things to keep me on my toes. If that meant blasting Pearl Jam in the speakers or firing off a machine gun in the bushes, he will do what it takes to get what he needs. He's willing to completely throw himself on the line and make a fool of himself to make sure he gets you where he wants you, and I think that's why actors trust him so much and love working with him because he's fun, exciting and a little bit nutty.

You play Taylor Kitsch's girlfriend, but Battleship is much more of an action movie than a romance. Were you disappointed you didn't have more romantic scenes with him?

Oh, goodness! That's such a tricky question. No—I mean, at the end of the day, it is a summer popcorn movie and we're certainly not remaking The Notebook by any means. You want to feel the love story between my character Sam and Taylor's Hopper because you want Hopper to get home to her by the end of the movie. Taylor and I had a few scenes, and that was plenty for the movie.

Most of your scenes are instead with a real life veteran who actually lost his legs. Tell me about working with him and the dynamic between your characters?

His name is Colonel Greg Gadson and he lost both of his legs in Iraq in 2007, and he plays that character in the movie. What I love about Greg is he's a former football player and a huge guy who's incredibly powerful—again, an active colonel—and he's coming into this movie with this predicament where he's making a movie with this scrawny little actress—me—who's only on her second movie. It was weird and kind of vulnerable. We had to get to know each other in this scenario where the two of us felt like newbies. He and really became friends—we were just texting today, actually—and we developed this really big bond because he wasn't used to feeling vulnerable and we really depended on each other to get stuff out of the scene. We got close fast and he was very open about his injury and the whole process of coming back from Iraq and the phases that he went through recovering. And that helped me so much because that's exactly what my character is going through: she's trying to help this guy recover from his injury. Working with Greg was really one of the most rewarding parts of the whole movie-making process for me.

Do you believe in life on other planets?

I do. I'm not saying they're big aliens with machine gun hands—they're not our aliens, I don't think—but we have like, what, two percent of the entire universe actually discovered and to think that we're the only planet with life feels a bit naïve. I think it's fun to imagine there's something else out there. Again, not something deadly that's trying to attack us, but it's kind of childlike and fun to imagine there's another earth out there, another world—it's intriguing.

If they were the aliens with the machine guns, though, you do strike me as the type of girl who would fight back.

I do? Thank you! Because I would. It's funny because Rihanna and I didn't get to spend a lot of time together, but both of us have these jobs where you're made-up and have pretty little dresses on all the time. It's a very glamorous job, but I think at the root of it, her and I are both really big tomboys who like to get our hands dirty. So, yeah, if this were to happen on earth, I'd be right there. I'd be shooting guns, I'd be fighting-I love that kind of stuff and I feel like that's truly me.

And now you've gotten to practice, so you'd be a step ahead of everyone else.

Exactly! I already know what they're going to do and what kind of weapons to use.

Your next film is What to Expect When You're Expecting where you have this May-December romance with Dennis Quaid. How different is that role?

My character is so annoying. You want to hate her. She's the annoyingly perfect character who goes through pregnancy just perfectly. She's this kind of redneck trophy wife, but she was so much fun to play. I fell into her so easily because I grew up in North Carolina, so it was like, "I know this woman." And Dennis and I have this really heightened, ridiculous, over-the-top relationship and we just went for it. We were like, "Let's be gross, let's be disgusting, let's have fun, let's push the boundaries," and he and I just had a blast filming it. It's really different from Battleship, but I hope it'll bring a couple laughs.

Your first few roles, you were cast as a model. But now you're getting more interesting parts. What was that process like to get filmmakers to see you as more than a model?

Every role that I've gotten, I've had to audition for several times. Nothing's ever been offered to me. Its all about proving to the filmmakers that I can do it. I think most people I've worked with will tell you that I'm incredibly hard-working, and I get that I'm a new actor and have a lot to improve on—I'm still learning a ton—but I think the biggest thing has just been putting in the work. I've been studying now for quite a while and it's definitely going to take a while for me to earn these roles, but if people give me a chance, that's all I can ask for. And I think people are seeing that, "Okay, she can work, she can do this." So hopefully I'll still be employed after this comes out.

Do you have advice for the Sports Illustrated 2012 cover girl Kate Upton for her move into acting?

She's already got Three Stooges coming out. She's only 18 and she's kicking so much butt. I think she's doing just fine.

What's a classic film role that you wish you could have played?