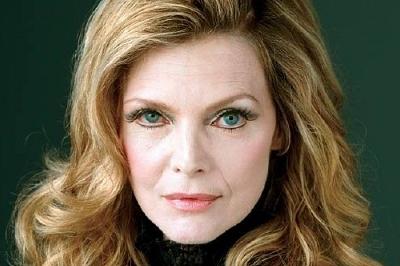 "Sickos never scare me—at least they're committed," purred Michelle Pfeiffer as Catwoman in 1992's Batman Returns. She meant it: after Pfeiffer hung up the whip, she continued to seek out quirky, complicated and sometimes sinister roles, playing everything from a perfectly coiffed racist in Hairspray to a deadly poisoner in White Oleander. Despite breaking the record for the number of times she's landed on People's Most Beautiful list (six times in the '90s alone) Pfeiffer made a point of only choosing parts where she could be more than a pretty face. And exactly 20 years after she ran roughshod over Bruce Wayne, Pfeiffer has partnered back up with Tim Burton for the goofily goth Dark Shadows where she holds court as grande dame Elizabeth Collins Stoddard. Was it just like slipping back into old times? Says Pfeiffer: it was better.

You were really young when the original Dark Shadows was on the air. Did your parents let you watch it?

They probably should have been paying more attention. My mother was probably cooking dinner and my father was probably in his office. By the standards of the time, it might have been considered pretty racy—certainly not by today's standards—but there were vampires and a lot of sexual undercurrents and it was spooky and scary and I loved anything scary. Couldn't get enough of that.

What was your first reaction when Tim Burton came to you and asked if you'd be game to take it to the big screen?

I was thrilled, but the truth is I approached him. And I don't normally do that—it's not something I'm very comfortable with—and in fact, I probably wouldn't have done it if I didn't already know him. But I happened to be working with a mutual friend of ours when I found out that Tim and Johnny were developing this, and that mutual friend kept encouraging me to call him and one day I did. There wasn't even a script yet. And then a long time went by—at least a year—and I honestly never thought it would even happen. You never know with these things, let alone that we were shooting in England where there's all these rules about how many European actors you hire versus American actors.

Where did you start in making this character that Joan Collins' created your own?

One of the things that made it so exciting working on this film was that there was discovery every day. Finding that some scenes are played more seriously, some are more campy, and you never knew from day to day, scene to scene, what tone you were going for. Sometimes even within a scene, it would change. It made every day really interesting.

You had to balance comedy with the macabre.

And it has to be grounded in some sort of reality, even though we are talking about vampires. You can't completely lose—well, I was about to say you can't completely lose credibility, but then again, maybe you can. The beauty of it is that audiences now know well enough that you have to take a leap of faith. Certainly with Tim, the public knows what his films are like. Which is obviously part of the fun of watching his films. It's also part of the thrill of working with him. It's not like you don't know this filmmaker and you're like, "Whoa! What was that?!" It's like, "Here we go!"

Audiences know what to expect.

Or they know they don't know what to expect.

Dark Shadows is as much about its posh, insular New England world as much as it is about the vampires—and that's what your character really represents.

Tim said from the get-go that he really felt that ultimately the movie was about family and the strength of the family bond. I think that will come through.

His decision to update the period just a little less than 10 years—from the mid-'60s to 1972—really changes the background and the environment of the world.

I love this period, I'm so happy that he chose it. It's such a cool period, but it's also such a fun period to poke fun of.

Do you get nervous before you see one of your own films?

I do—I actually don't enjoy seeing my films. You know, I never saw—and it's a first for me—but I didn't see New Years Eve. It came out over the holidays and I just didn't get to see it. And there's something really nice about not seeing it because I'm so hard on myself. But I'm so looking forward to Dark Shadows—I got really excited just watching the trailer. Like everyone else, I saw it online and it was just so good. When you're shooting a film, if you aren't in every scene there's just so much you aren't privy to. Even the ones you're in, they're adding special effects and it's so much about the editing and the music, so just to see it all come together, I can't wait. I'll just close my eyes and plug my ears when I come onscreen.

Is there any film of yours that you're okay watching?

No, because it's not about the film, it's just about me. No. But I guess the ones that I'm in the least, I'd feel the most comfortable. So I really should have seen New Years Eve.

It's been 20 years since the last film you did with Tim Burton: Batman Returns. Did it feel like that much time had gone by?

I just have this overall feeling of Batman Returns—I actually don't remember it that well—so I just remember that it was a lot of hard work. The best kind of hard work. And this was the same, only I'm older now and not that I wasn't appreciative before—because I was—but again, it's Tim Burton giving me the opportunity to play a childhood fantasy. Catwoman was a dream come true and I relished every moment of it, and here I am now in Dark Shadows amongst the vampires. Among everything else that Tim brings to the table is all the people, all the talent, that he surrounds himself with and that gravitates to him. In every department, everywhere you look, it's just so exciting to see that level of work coming from everyone who walks onto the set—or even who doesn't walk onto the set but works behind the scenes. He's intense, but he's a lot of fun to work with. On this one, we just had this almost telepathic kind of communication about the tone of the movie. It was kind of weird and hilarious and we laughed a lot. I watched the old Dark Shadows show every morning in the make-up trailer. It took everybody a while to get ready and usually I get really impatient with that whole process, but this was so fun because we were all completely addicted to Dark Shadows.

I've felt so sorry for every actress who's been cast as Catwoman after you—fans have been so hard on them. Did you feel that same scrutiny when you first took on the part?

There wasn't all this hideous blogging on the Internet. There may have been a lot of criticism, but I just wasn't aware of it. And now, it's just in your face. Anybody can just say the most hateful things, and then anybody can jump on the bandwagon. Also, because I was the first person to do it in a movie setting-and it had been a long time since the TV show-the old Catwomens weren't really fresh in people's minds. But people definitely have their favorites, and I'm not a lot of people's favorite. I think people have been unfair about it to the people who have been passed the torch, the Catwoman torch.

The whip—it'd be the Catwoman whip.

I was surprised to realize that this is your first film with Johnny Depp.

I know! I've just been such a huge fan for so long, so long. He's so much fun to work with and you never know what to expect. He didn't disappoint.

That clique of Tim Burton, Johnny Depp and Helena Bonham Carter is always working together. Was it hard to be the new person coming into that circle?

Everybody was coming in and out, so everybody was having to feel like they were restarting again. Except for Johnny—he was there all the time because he's in every frame just about. Some of my most tedious days of shooting were those family scenes around the table because all the actors were there, except for Eva Green of course, and it takes forever because you have to shoot everyone's coverage so you're doing things for the 150th time. But everyone was so funny and so entertaining that we just laughed a lot.

Your next film, People Like Us, is directed by Alex Kurtzman. He's written some of the biggest movies of the last several summers—Star Trek, Transformers—but this is his first time at the helm. How was his learning curve as a director?

He's a really good director. It's a real character piece and he's great with actors, he loves actors, he's great with story, he's just tireless. He's really, really good. I play Chris Pine's mom and the movie, again, is about family. Initially, it's about the tearing apart of a family, and then it's out it coming back together and accepting each other warts and all. There are no perfect relationships, there is no perfect family—we're all dysfunctional to a degree. And that's liberating because then you can begin to have real connections with people.

Do you see a family resemblance between you and Chris?

Maybe a little? We're both fair. Do we look alike?

You both have those light blue eyes.

And noses and ears.

Especially in the last ten years, you've been playing more fun villains than romantic heroines. Talk about your choices.

There's a kind of freedom in taking on those kinds of parts where the movie isn't really resting on your shoulders, or on whether or not you're romantic or sexy and pleasing to the audience, or whether that audience is with you and rooting for you. That can color your performance. For me, the best actors are the ones who don't care about that even when they're the lead in the film, but it's not always easy to pull that off. I'm actually enjoying the work more than ever—it's been kind of liberating.

I think in the beginning, it took a lot of patience and there was a lot of waiting in between parts. I've always just looked for parts that I thought were interesting. I was never very calculated about things, which I probably maybe should have been more so. But I think it really came about as being always on the look for any opportunity that I could find that allowed me to play a part where beauty wasn't important. In fact, I had to play against that, and a lot of those parts came in unusual ways. A lot of them came in TV in the beginning.

You've turned down a lot of roles that other actresses would kill for, but you don't strike me as someone who would have regrets about that.

People turn down things for different reasons and it's not always because you don't want to do something. I've turned down things that I really, really, wanted to do...but I wanted to do something else more. And sometimes it's a life choice. So, yeah, I don't have many regrets. Of course, it isn't easy when you go on to see that movie become a big blockbuster and you see the actress get an Academy Award. But you go, "You know, I know I made the right choice." So it's true: I don't have any regrets.